Skip to content
Jordan’s
Big Mistake
It
was a beautiful late July morning, although bright and sunny, it
cooler than it had been for most of the month, and had lost the
oppressive humidity which could make summer in the southern states
uncomfortable at that time of year. Having been raised in cooler
temperatures of the Carpathian mountains, Goran had never become
fully accustomed to the high summer temperatures of his adopted
homeland, so he welcomed this respite, even though it was likely to
be short lived.
As
such, the old man was in an unaccustomed good mood as he made his way
down the street, heading towards the nearby park, where he planned to
sit in the now more bearable sunshine and enjoy the day. His good
mood was further improved by a few undisturbed night’s sleep, as,
since the incident with the hornets, his, now much subdued downstairs
neighbour Chase Colby, had ceased playing loud music into the early
hours, for which Goran was very grateful and he resolved to forgive
the lad for his previous lack of consideration.
Chase,
of course, was not the only local youth who had recently angered
Goran. Young Jordan Draper had done far worse that Chase Colby, not
only had he assaulted Goran, but he had deeply offended the old man,
to the point where the aged shaman had summoned up slumbering and
long forgotten forces from deep within the Earth dark heart to enact
revenge.
For
a while, in the red mist of his fury, Goran had been blind to
compassion, and as such Jordan, and in particular, Jordan’s cute, 18
year old, bottom had paid dearly for his crimes. However, today, for
the first time in a long while, Goran felt calmer and happier, he was
finally in a mood to forgive, maybe even to forgive Jordan Draper.
It
was then that a faint “meowing” sound attracted his attention to
a small ginger ball of fur on the side of the path, a tiny kitten,
maybe only a few month’s old, and perhaps having ventured away from
its mother for the first time. 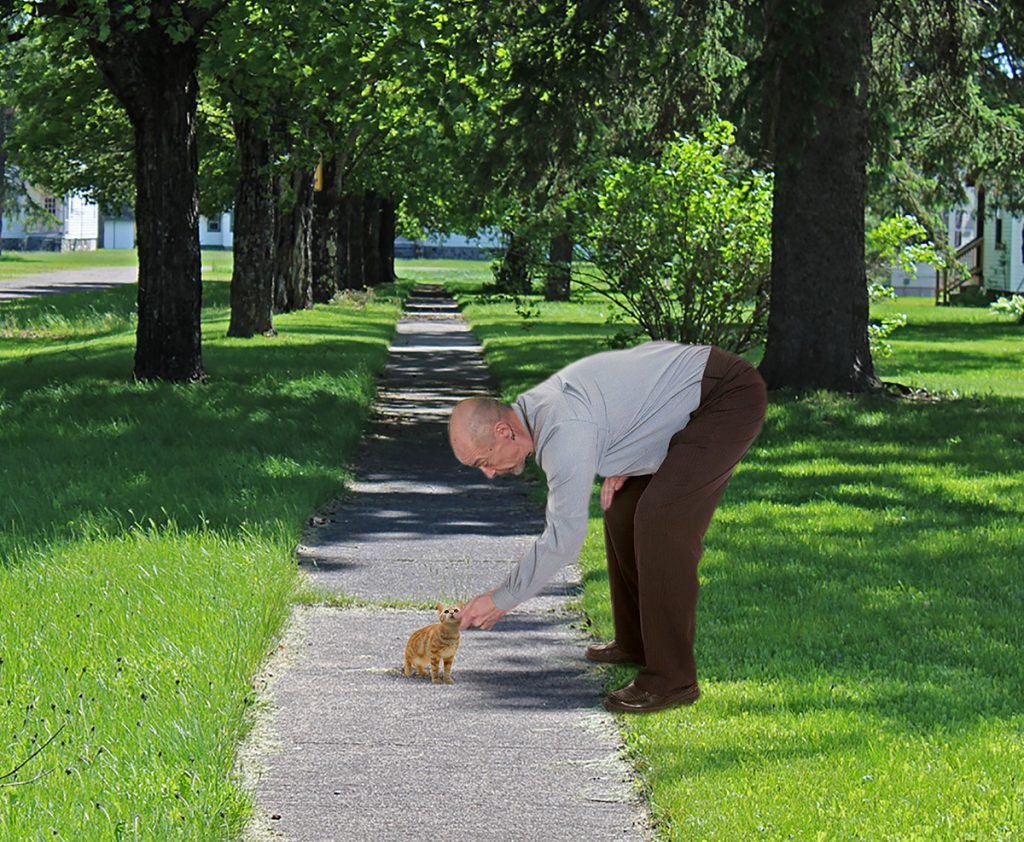 Goran
was an animal lover, with a particular affinity for cats, a creature
been the familiar of Goran’s type. He bent over and petted the tiny
feline, which rubbed it’s head against his calloused old hand in a
friendly manner. The little animal’s display of innocent affection
warmed the old shaman’s heart, and quelled and remaining desire for
vengeance. Perhaps it was time to call back the forces he has
unleashed, and to cease punishing Jordan.
As
he hobbled on, Goran was thinking about Jordan Draper, and whether
the recent experiences might have improved his character, when, by an
unexpected coincidence, Jordan himself appeared, walking down the
pavement towards Goran.
Jordan
did not recognise Goran, he had quite forgotten the incident the
previous week, when he had knocked the old man over, then kicked and
insulted him. In fact he hardly noticed Goran as he walked past
forcing the older man to step off the path as he did so. He had more
important things on his mind than some irrelevant old fossil.
Jordan
was both angry and nervous, today was the day he was supposed to
return to the doctor for his booster injections, and he needed to
fathom a way of avoiding that, especially as the Doc insisted on
jabbing those huge needles into his ass.
As
Jordan continued down the path, the kitten, which had only ever known
kindness in it’s short life, trotted forward, meowing prettily, in
the expectation of being petted and perhaps even given food.
Jordan
was not by nature cruel to animals, and was, if anything, usually
indifferent to them, preferring to bully weaker humans. But now he
was angry, frustrated and in and an altogether very bad mood. Sill in
discomfort and with the memory of his recent humiliations still fresh
in his mind he felt the need to lash out at something, and the kitten
offered a suitable target. So it was that Jordan committed and act
of brutality which would have consequences which he could not
imagine. 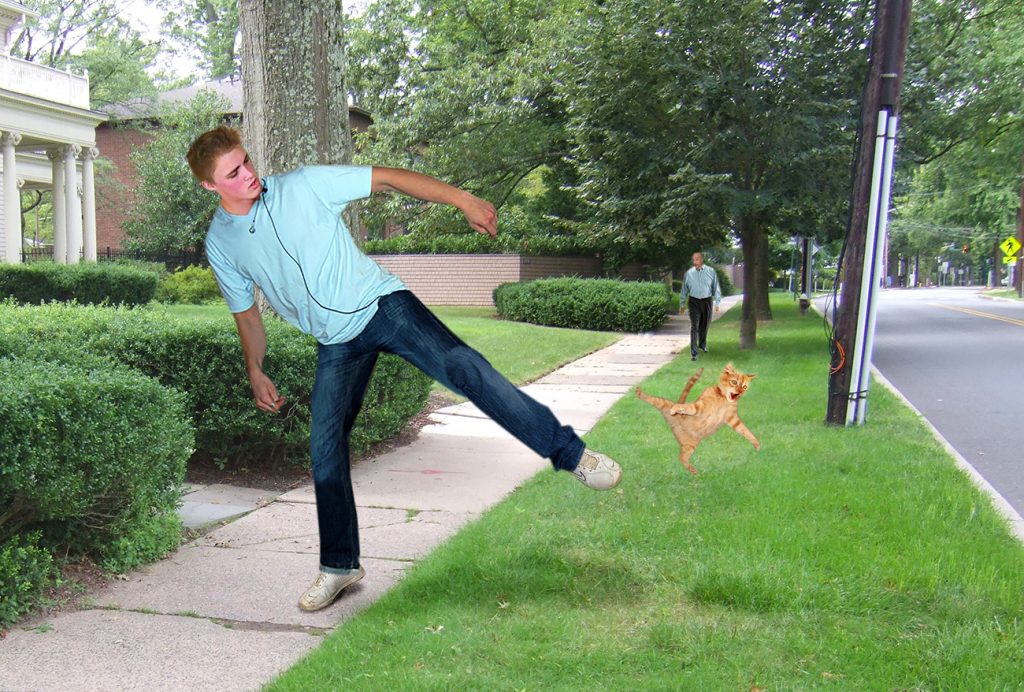 “Fuck
off rat!” snarled Jordan, aiming a kick at the diminutive creature,
hitting it in the rump and sending it flying through the air with a
high pitched and plaintive cry of pain to land heavily, for a kitten,
on the grass at the side of the path.
Jordan
walked on without looking back, or caring what had become of the baby
cat.
Goran
watched in horror, at first unable to believe what he had just seen,
or comprehend how anyone could be so cruel to such a fragile and
innocent creature.
As
fast as his old legs could carry him he hobbled back to where the
kitten had been, anxious to check that it was alive and unhurt.
However, having lost forever it’s innocent trust in humans, the
little animal now hissed at him and ran away to hide in a nearby bush
.
Goran
turned to watch Jordan heading down the road and felt the rage which
had all but abated rise again within him. As his tiny but piercing
eyes focused on Jordan’s jeans clad behind any remaining vestige of
compassion and forgiveness evaporated to be replaced by pure white
hot fury.
He
could pardon what had been done to him, but such an act of cruelty
against a helpless animal was unforgivable. As he stood there, his
ancient claw like hands gripped into tight fists and his habitually
bent back now ramrod straight, his lips began to move as he began to
chant incantations in an archaic and long dead dialect understood
only by forces now stirring again in the deep and airless caverns far
below his feet.
As
Jordan walked on he had no idea how close he had come to a reprieve
or how one split second act of animal cruelty had blown it for him.
****************
“The
Shaman’s Revenge Part 6” will be posted shortly
-/-