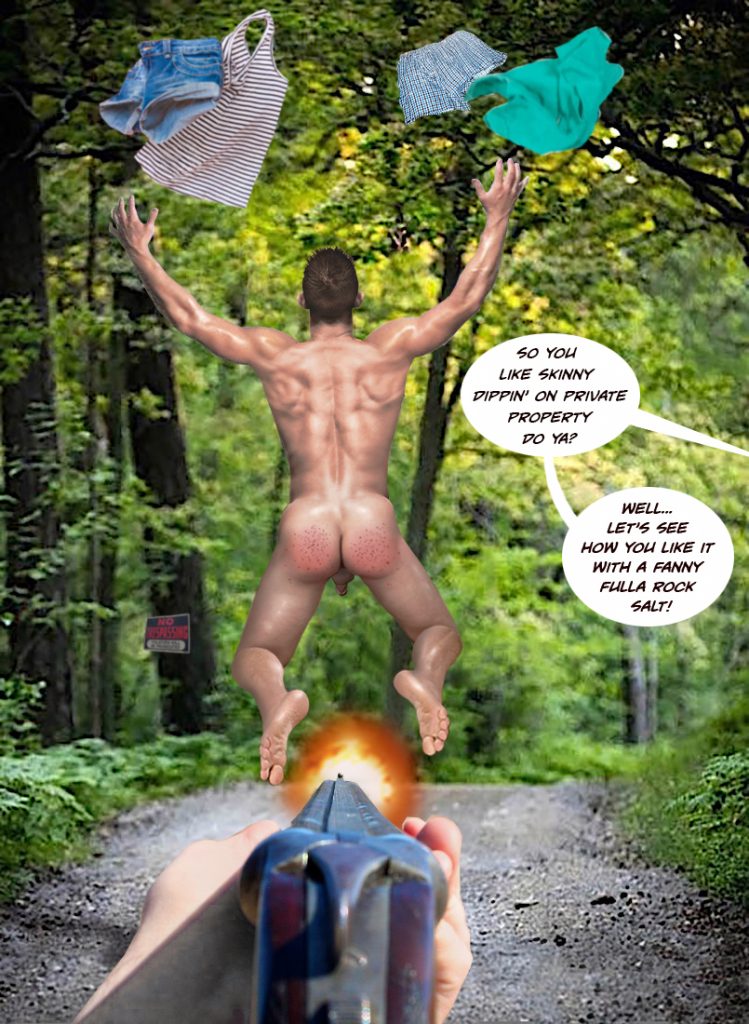 Rock
Salt
Thanks
to the fantasy artist Mark for his image of an unlucky skinny
dipper
Click Here see more of Mark’s work at the JockSpank site
The
Shaman’s Revenge Part 15
After
a sleepless night, Jordan was untied and dragged blinking into the
day light by the Cody brothers, Floyd, Billy Bob and their brooding
middle brother Seth. “It’s time for you to earn your keep boy!”
snarled Floyd “We’re gonna’ put you to work!”
“Please
let me go!” wailed Jordan “My Dad’s a rich man, he will pay for
the eggs and milk I took!”
“SO!”
growled the elder Cody brother “You think just ‘cos your a rich kid
you can steal from us farmers and that your rich Daddy can pay us off
do you?” he moved closer to Jordan so that his craggy, unshaven
face was inches from the frightened young jock’s “Well that ‘aint
the way it works around here!” he hissed 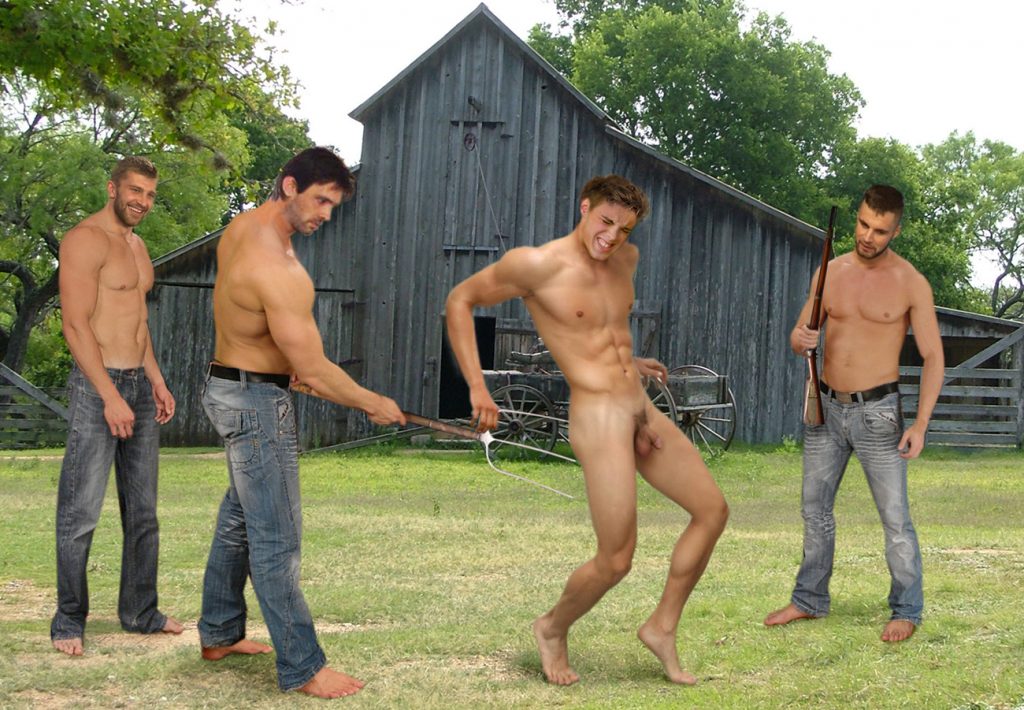 With
that, the three men led the unhappy and naked Jordan out of the house
and across a nearby field towards some old barns, as Floyd encouraged
Jordan onward by jabbing his bare bottom with the sharply pointed
spikes of his pitchfork.
Jordan
considered attempting to escape, judging that in a sprint he could
almost certainly have out run the more heavily built Codys. However,
seeing the rile which Seth was carrying, he decided not to chance his
luck, as although he could outrun the men he could not outrun a
bullet. 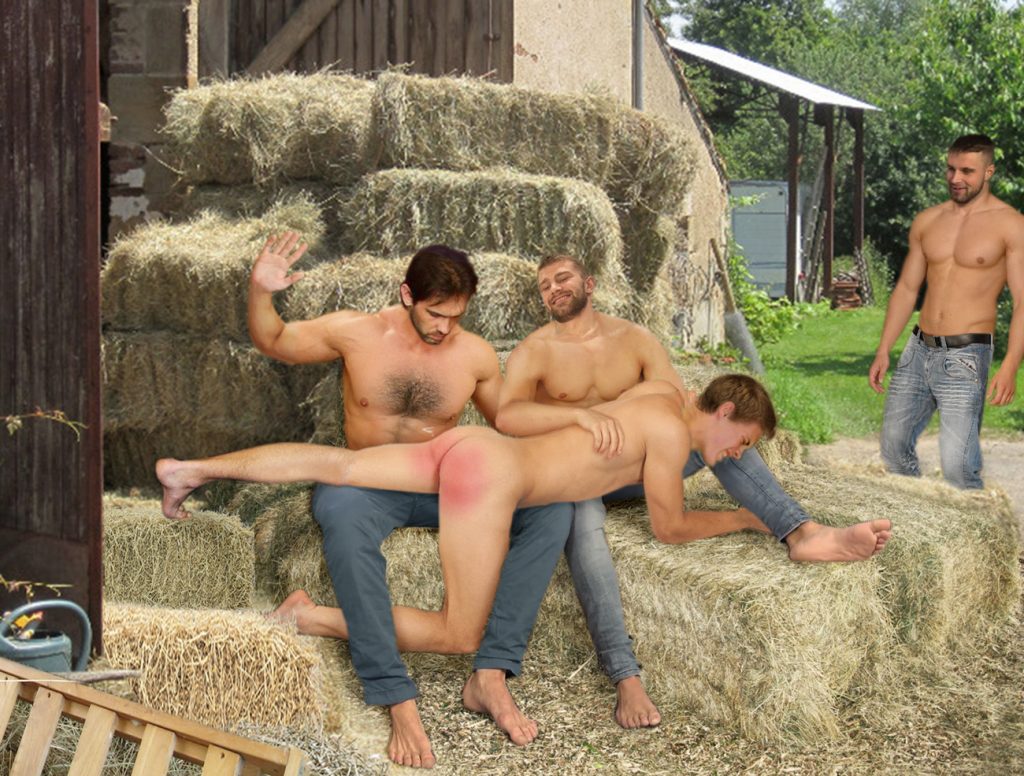 In
order to further encourage Jordan. As soon as the group reached the
barn, Floyd sat down on some bails of hay and threw the protesting
young swimmer over his knee before proceeded to administer a hard
hand spanking while Billy Bob held him down.
When
Floyd had finished spanking Jordan, he handed control of the new and
and unwilling ranch hand over to his bothers, and told them to put
him to work in the hay barn, before heading off to another part of
the ranch.
However,
as soon as their elder brother had departed the scene, it became
clear that, rather than working, the younger Cody brothers wanted to
play with their new toy.
“Hey
City boy!” Sneered Billy Bob “Make that squealy noise you made
when Floyd” whupped your ass!” then he said something which sent
a chill down Jodan’s spine, as Cindy Mae’s prophetic words from two
days before echoed in his brain “Make like a little piggy city
boy!”
“What
.. what do you mean?” stammered Jordan
“I
mean squeal like a piggy dumbo!” shouted Billy Bob, slapping
Jordan’s head with the back of his hand “Get down on your hands and
knees and crawl like prime bacon!”
Jordan’s
instinct was to protest, but once again the sight of the rifle, which
Seth was still holding, persuaded him to obey. Reluctantly he
lowered himself onto his hands and knees and attempted to grunt in
the manner he imagined most similar to a pig.
“No
Dickhead” shouted Seth “you need to squeal like a cute little
piggy, not grunt like a fat old sow!” 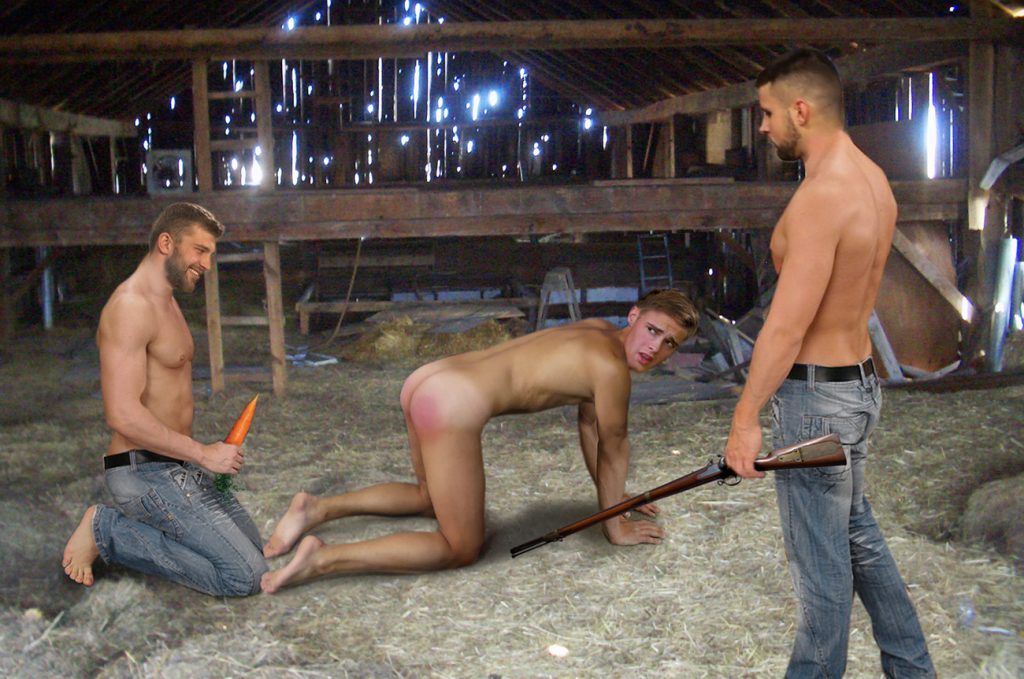 “I
can make him squeal!” laughed Billy Bob, picking up a large carrot
“A piggy needs a tail!”
“Ha
Ha!” laughed Seth “Pin the tail on …. er .. up the piggy!”
Billy
Bob knelt down, and grabbed hold of Jordan and attempted to push the
carrot up the prone jock’s anus, as Jordan yelled in distress.
“Please guys, stop, don’t do this to me!!”
“This
city boy, sure has a tight ass!” complained Billy Bob as he pressed
the large carrot against the unyielding pucker of Jordan’s
instinctively contracted portal “I can’t get it in!”
Here,
Let me try , said Seth, taking hold of the carrot and kneeling down
between Jordan’s legs, while his brother straddled the unhappy jock
and held his butt cheeks apart. 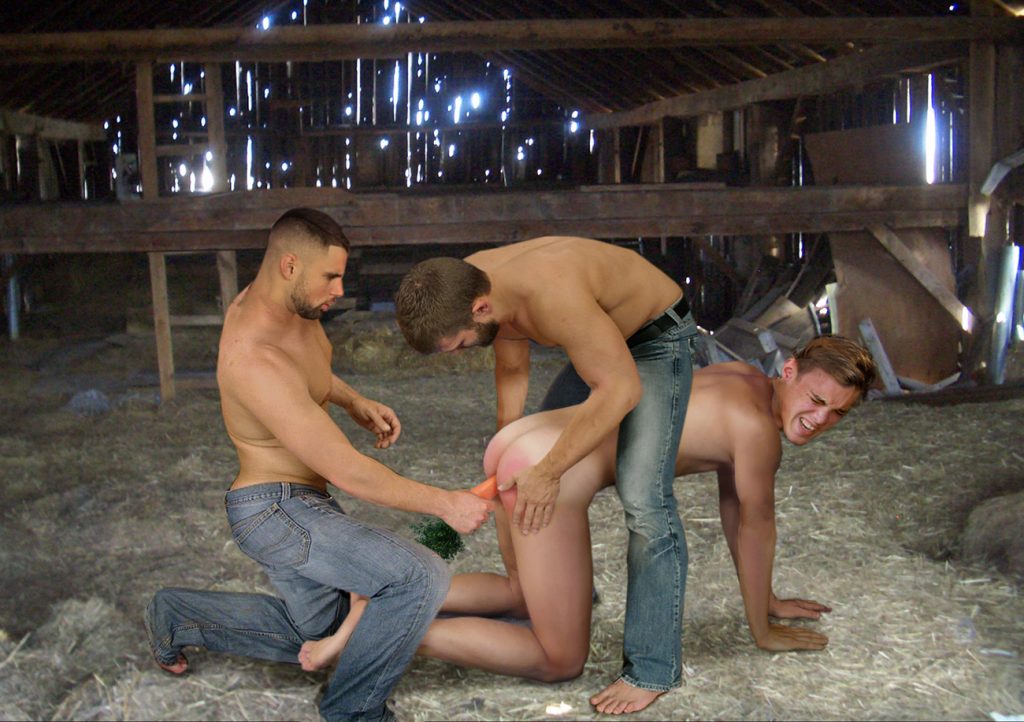 Seth
gripped the carrot tightly in his fist and then rammed it deep into
Jordan, forcing it between the tight pink lips of his anus and then
up inside, as Jordan let out a shriek of discomfort and outrage.
“Yeah!
, that’s the noise piggy!” laughed Seth “that is a really piggy
squeak!”
Over
recent weeks Jordan had had the unaccustomed experience of various
items being inserted into his tight virgin portal, but the massive
carrot was the largest , by far the widest so far and certainly the
most uncomfortable so far. It was also an unusual sight, to see a
handsome young athlete on all fours with a large orange vegetable
together with it untrimmed green plumage protruding from his rear,
certainly more elaborately than any curly pigs’s tail. 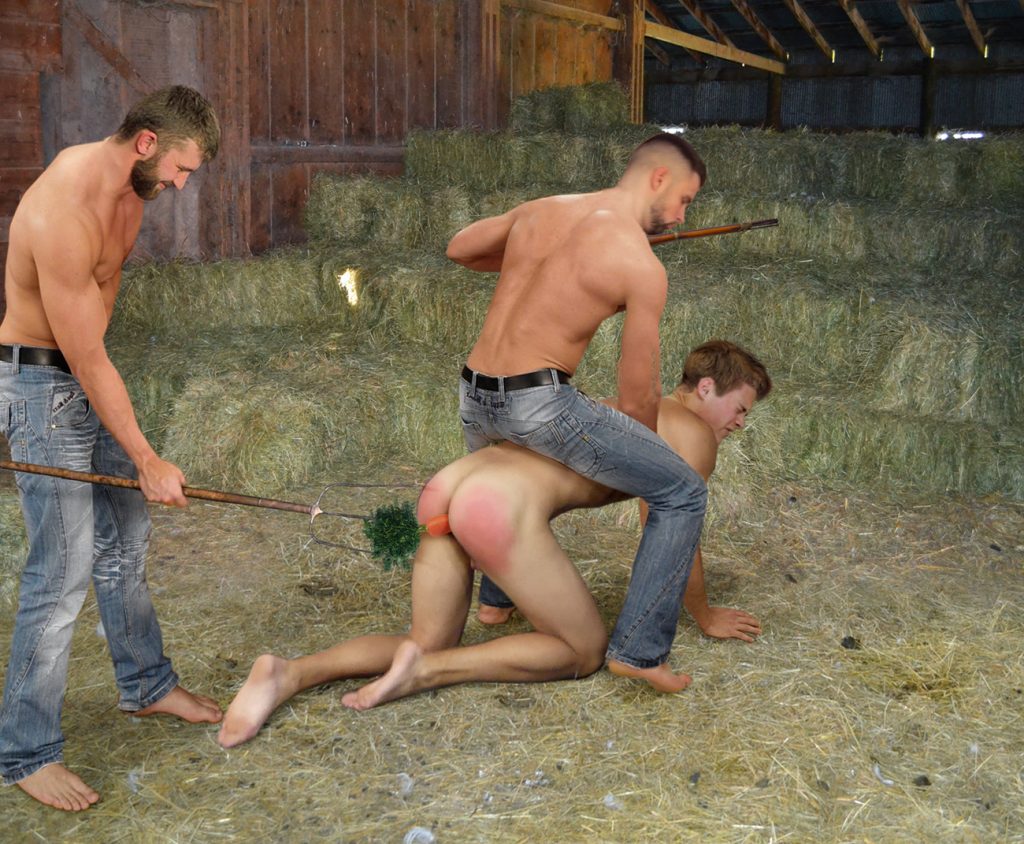 The
Cody brother continued to have fun with their unlucky captive, making
him crawl around the barn with one or other brother riding on his
back. 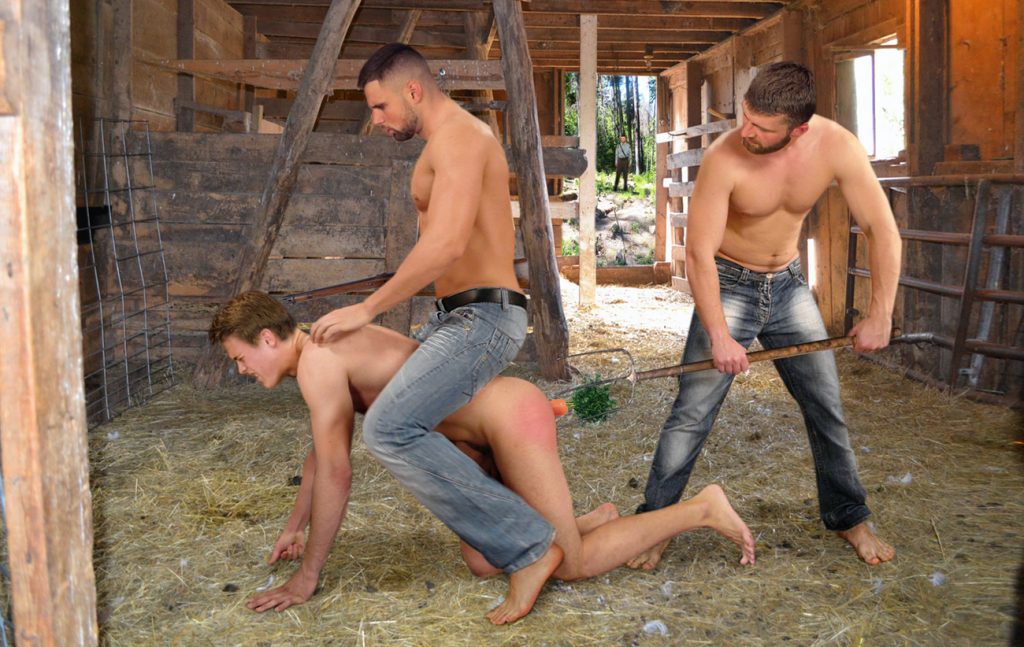 “Crawl
faster pork chop!” yelled Billy bob as he jabbed at Jordan’s rear
with his sharp pitchfork.
Eventually
the Cody brothers tired of making Jordan act like a pig and roughly
pulled the carrot out of his backside. However, they had other plans
for him.
“I
think this City Boy would maker a better rooster than a pig!”
Laughed Billy Bob
“A
rooster?” replied Seth quisically
“Yes
with a big feathery tail!” replied Billy Bob
With
that they dragged Jordan out into the meadow next to the barn, and
tied his wrists and ankles together sop as to force him into a
chicken like pose. 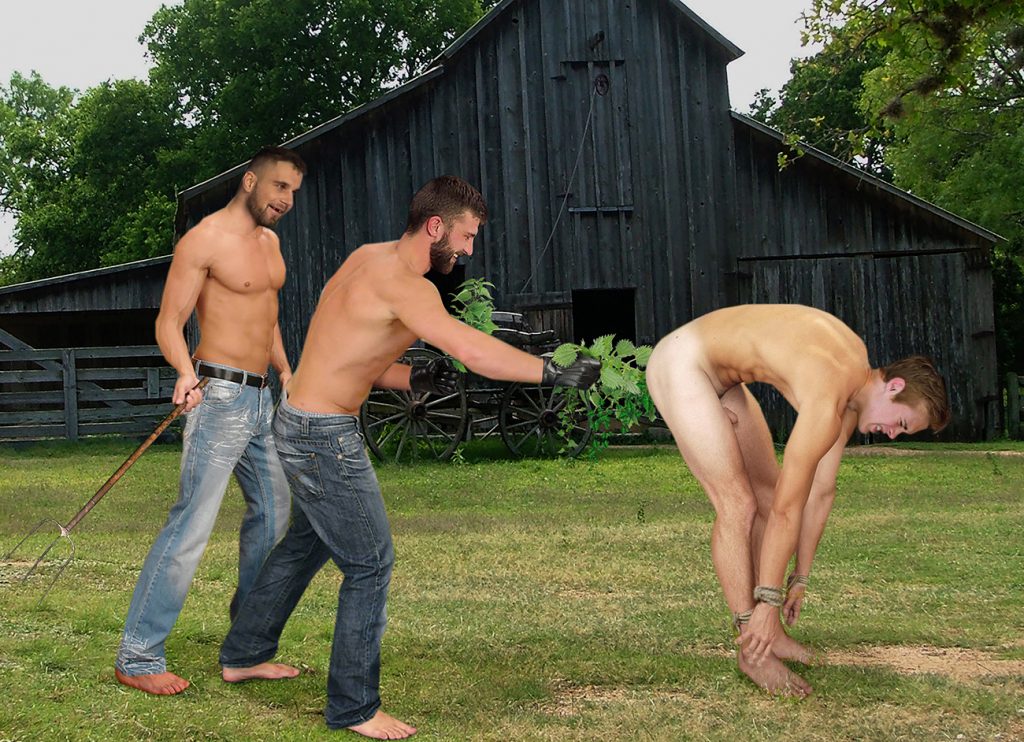 Then,
after pulling a pair of leather gloves from his jeans pocket, Billy
bob set about creating a “big feathery rooster’s tail” with
nettles and poison ivy, which he proceeded to shove unceremoniously
up the tender part of Jordan where the carrot had previously been.
As
the boys laughed uproariously, Jordan was forced to waddle around the
farm yard clucking like a chicken, with his fiery, sting covered
“Tail” flapping behind him, the combined nettle stings and poison
ivy turning his tender orifice into a ring of fire, which was sure to
burn for days afterwards. 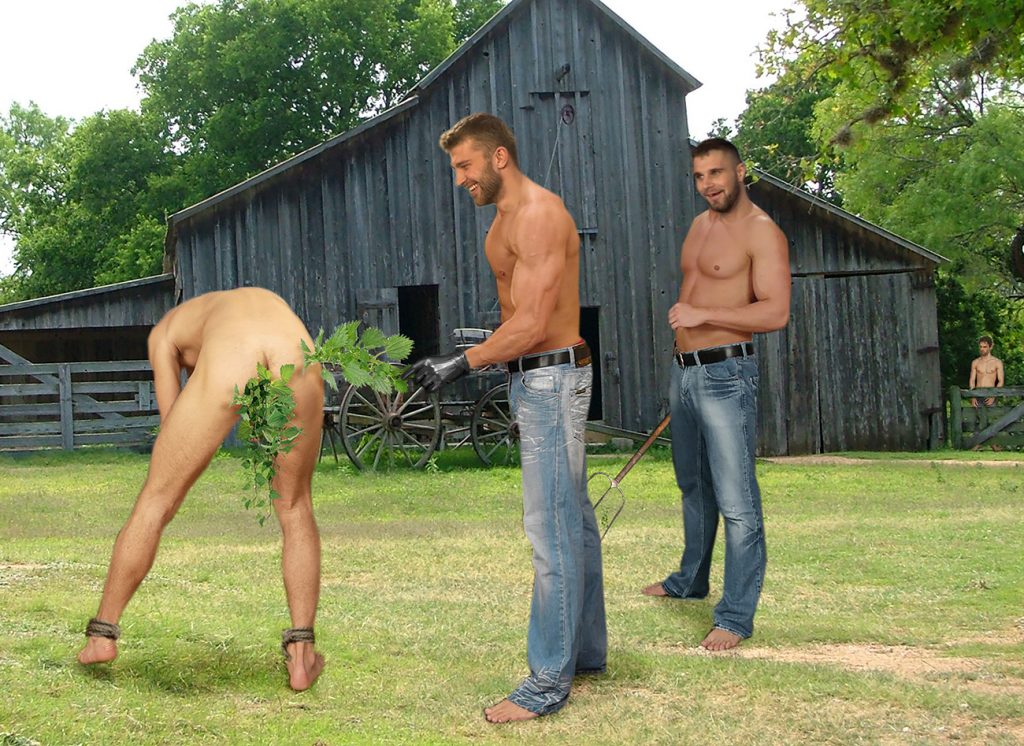 Jordan’s
backwoods adventure was becoming very uncomfortable
To
Be Continued ..