Skip to content
The
Singeing of Chrispin Cherrybutt
Part three (1 of 2)
– Crispin meets the Brothers
When
he first viewed the huge building, looking out of the darkness,
Chrispin had imagined he had come across a castle, however, as he
moved closer, he realised that it more closely resembled a religious
building , although the absence of any religious symbolism seemed
initially puzzling. He approached the large and heavy wooden door,
and felt a sense of foreboding which he attempted to dismiss by
reminding himself that he was a brave knight, who had only recently
fought a dragon, his mind proud mind quickly seeking to draw a veil
over his humiliating defeat, at the hands, or more aptly, the fiery
breath of that beast.
He
knocked on the door, and heard the rattle of his own knuckles on the
ancient timber echoing in the corridors within.
After
what seemed like an age, the door was opened by a cowled monk, who
silently gestured him to enter, and then follow him down a long dark
passageway, although he was a little unnerved by the monk’s mute
demeanour, his options were somewhat limited, and, as he kept
reminding himself he was a brave knight, for whom there was nothing
to fear in the dark chambers beyond. 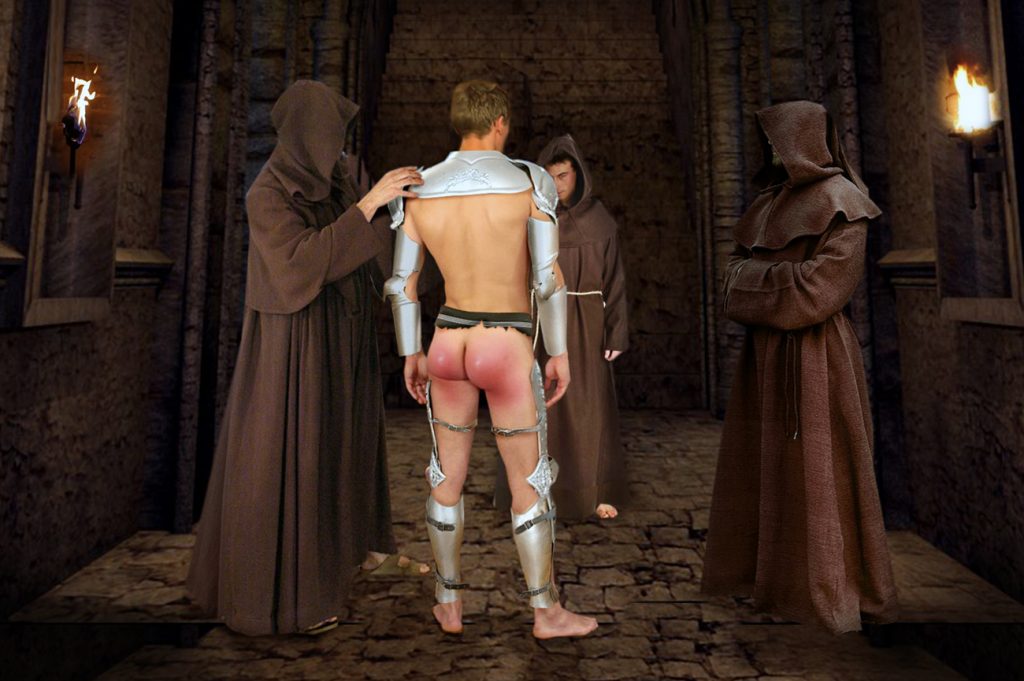 The
then came upon two further monks, who stepped forward to greet him.
Although like the first monk, one of these two also remained silent,
a third, who appeared to the more senior, did speak, a deep gravelly
voice growling from within his face concealing cowel. “What brings
you to our door Sir Knight?” he asked “Very few travellers come
to this lonely place.”
“I
have travelled far, Good friar!” replied Crispin “I came on a
quest to slay a dragon!”
“The
dreadful fire breathing beast, which has been terrorising the land
these last decades?” asked the gravel voiced monk
Crispin
frowned, at the mention of the dragon’s fiery breath, and nodded.
Although, he was anxious to regale the monks with tales of his daring
do, the burning main in his rump was a more pressing priority,
especially as holy men, such as these, were often in possession of
balms and ointments, which might relieve his discomfort. “Sadly I
have suffered an injury.” he said “And I hope you could be of
assistance!”
Despite
his embarrassment at the location of his “injury” he turned and
showed his scorched bottom to the monks. The two, previously silent
Monks, murmured sympathetically, whilst the friar with the deep voice
first sucked air through his teeth before saying gently “My my, Sir
Knight, that must be giving you some distress, but fear not, we have
many remedies for burns and scalds sch as those, we will have that
handsome young rump of yours back to it’s painless white purity in no
time!”
Crispin
sighed with relief, that was the good news he was hoping for. “I
will be forever grateful to you good friars, if you can ease my
pain!” he said.
The
monks lead him into an inner chamber with a very elaborate but
somewhat Byzantine looking altar and a number of disturbing wall
paintings. Chrispin again, briefly pondered the lack of familiar
religious symbolism, but concluded that the gentle brothers must
belong to a sect with which he was not acquainted.
The
monks, assisted the young knight in removing his heavy armour, and
when he was naked asked him to lay, on is stomach, on a high table in
front of the strange altar. 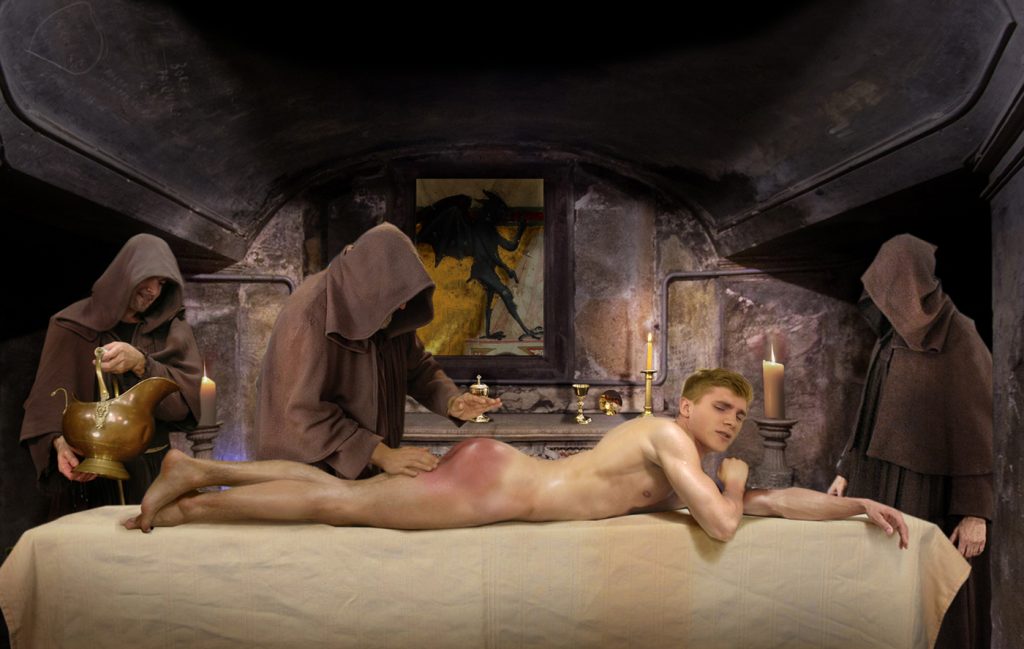 The
speaking monk, looked down at Crispin’s rosy upturned bottom, and, as
if unable to resist temptation, raised his hand and gave Crispin’s
sore bottom a gentle slap. “That does look sore Sir Knight!” he
said
“OWCH!”
snapped Crispin, looking angrily over hios shoulder.
“I
do apologise Sir Knight!” came the reply, Crispin could not see the
monk’s face, but an intuition told him that deep under the folds of
his hood, the man was grinning.
That
fleeting thought vanished, as a second monk appeared carrying as
container of musk scented oil, and allowed a few drops to fall onto
Crispin’s bottom. The gravel voiced monk then proceeded to massage
the oil into the red and scorched skin. At first Crispin gasped at
the pain caused by the older man’s hands on his tender skin. 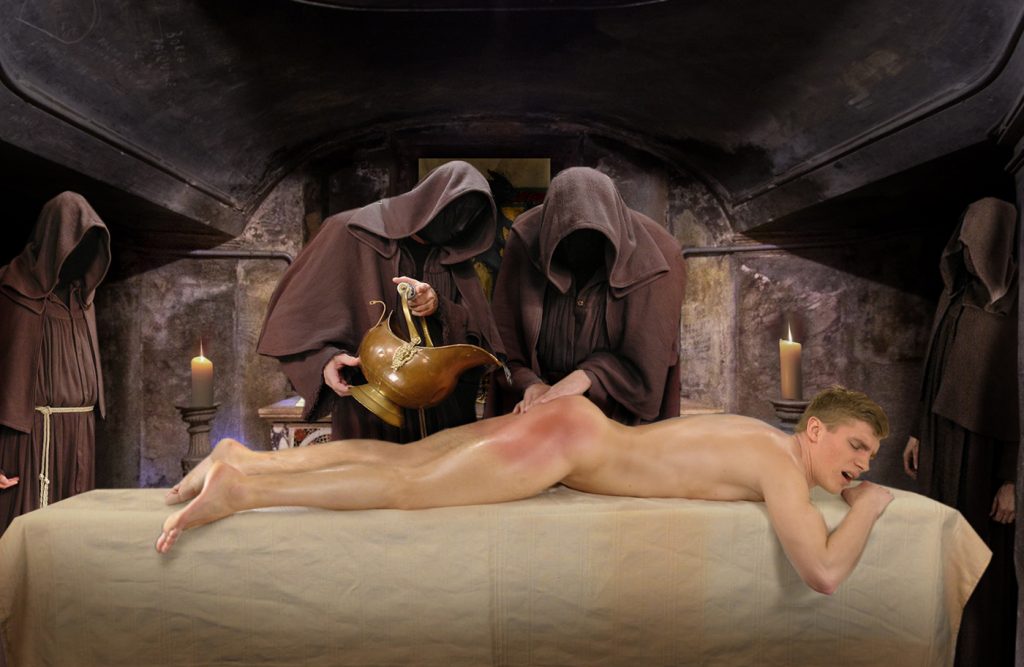 Then
slowly, as the monk continued to rub the oil into his flesh, he could
feel the burning sensation gradually fading. He realised that the
pain he had been living with for many hours was fading.
“What
is that wondrous balm?” he asked, the relief palpable in his voice
“This
oil is much prized for its mystical healing qualities and and
efficacy as a pain reliever Brother Samuel brought it back from his
travels in the northern lands, where it is greatly valued.” replied
the friar as he continued to almost lovingly massage the oil into
Crispin.
Later
that evening, one of the silent monks, ushered Crispin to a small bed
chamber off one of the passage way, where first he fed him with newly
baked bread, washed down with a flask of blood red wine. 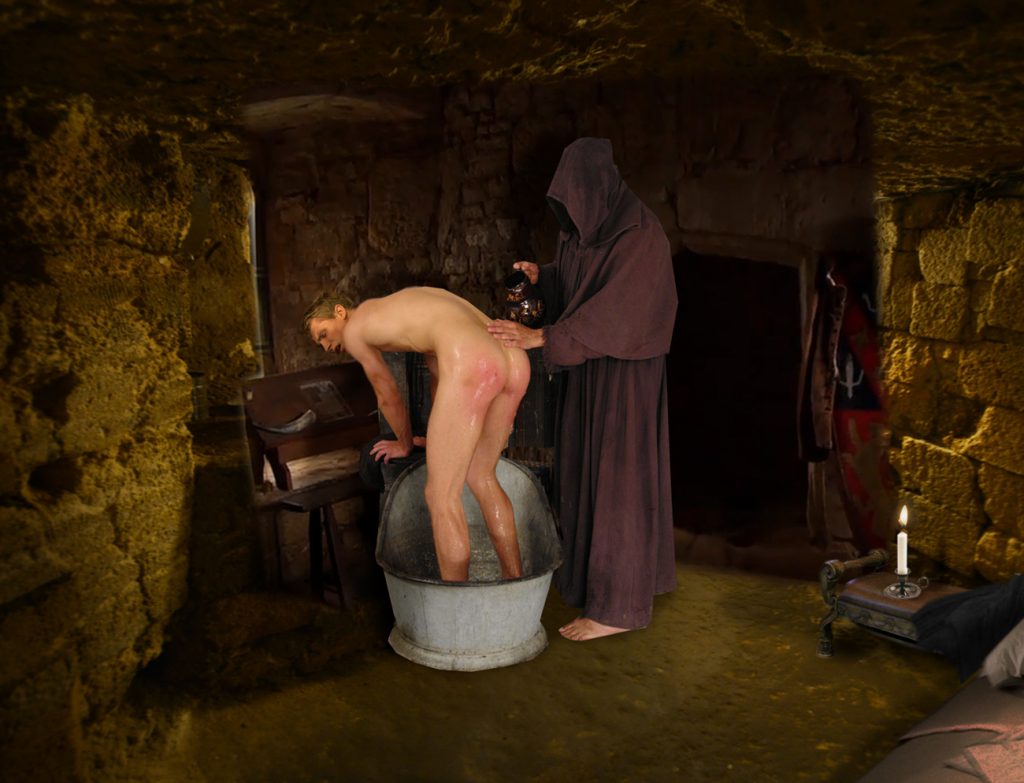 Then the
monk bathed the handsome young knight gently washing away the dust
and sweat from his long arduous journey and the residue of the oil
left from the earlier treatment.
Although
Crispin was not inclined to enjoy the touch of another mail, he
tolerated it for the relief it brought. When the Monk gently washed
his behind, it was not the agony it would have been an hour before.
The young knight’s bottom still stung and tingled, but it was no
longer the searing pain the dragon had left him with. 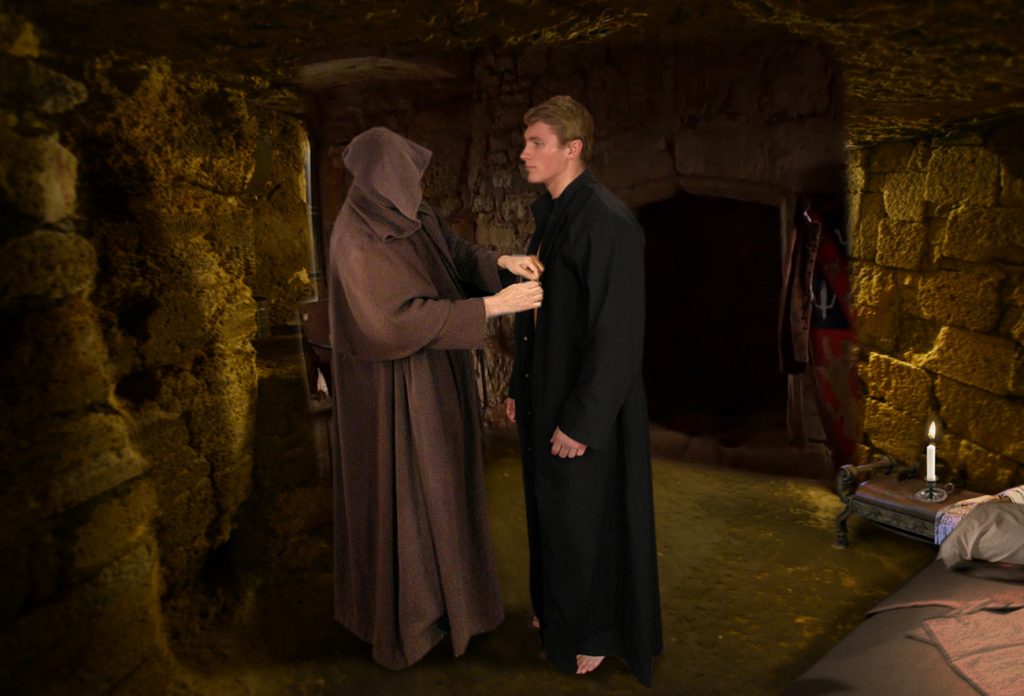 Finally,
the kindly monk, anointed the young Knight’s body with cologne, and
gently dressed him in the clean black robes of a postulate, before
bowing out and leaving him to sleep in the newly prepared bed.
However,
sleep was the last thing that Crispin intended to do. As he had bed
led through the passage ways earlier, Crispin had chanced to glance
into a number of the chambers as they had passed, and he had seen the
monastery’s glistening treasure. Golden bowls and ceremonial
goblets, gold and silver candle holders and incense burner’s
encrusted with gem stones.
Such
items would bring him wealth if sold, or melted down upon his return
to his home town, and that was exactly what Crispin planned. He might
not retun with the fame of a dragon killer but he would have the
compensation of being a rich man.
The
generous monks might have taken him in, treated his wounds, fed,
washed and clothed him, and given him a bed for the knight. However,
he felt no sense of gratitude to them, they owned the treasure he
lusted for, and he intended take it from them.
The
monk had spoken of the brothers travelling to far away lands, so, he
concluded, the monastery must have a stable, from which he could
steal a horse and escape with his booty, before the monks knew it had
gone.
In
the middle of the night Crispin slipped out of the tiny bedchamber
where the gentle monk had left him, and crept through the dark
passage way, carrying a sack he had fashioned from his blanket. He
did not have to search for long before he reached a room he had spied
earlier, and could the precious items glimmering in a beam of
moonlight shining through a small window.
The
young knight hurried about his work, grabbing at the gold items laid
out on a large wooden altar, and stuffing them into his rudimentary
sack. 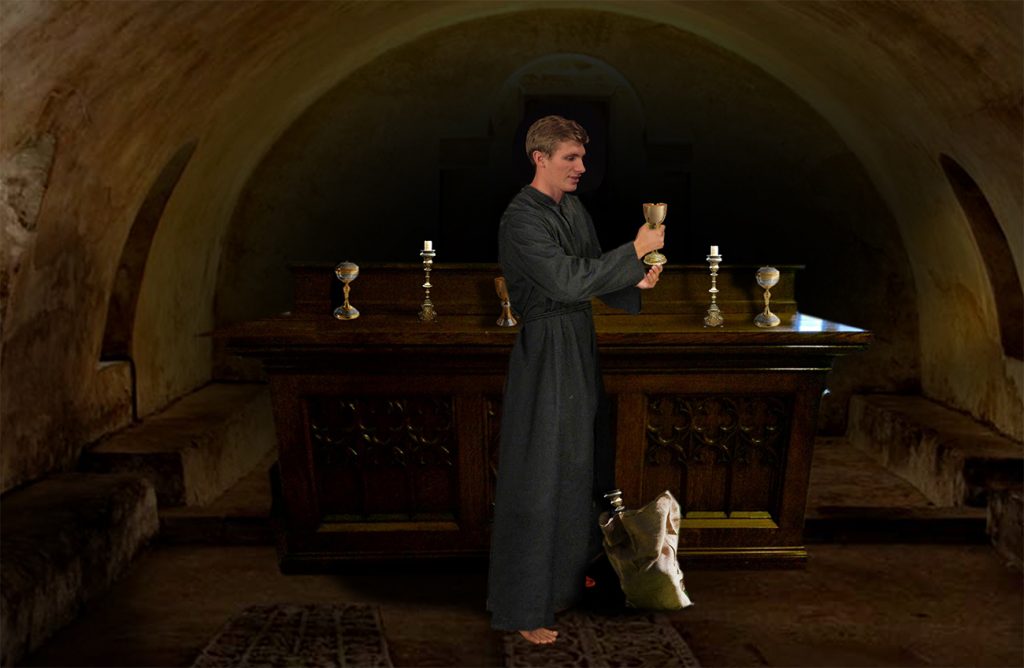 One particular item was a large golden goblet, which he held
up in the moonlight to get a better view. It was a magnificent object
of pure gold, with the stem encrusted with precious gem stones, which
had been lovingly crafted by some artisan goldsmith possessed of
incredible talent.
However
the greedy young knight did not see the beauty or artistry in the
object he held, he only saw it’s monetary value, and the wealth it
would bring to him when the gold was melted down and the glittering
stones sold on for jewellery.
“My
My, You are a naughty young rascal are you not Sir knight!” a
familiar deep voice boomed from the darkness behind him. Crispin was
briefly frozen by shock, he dropped the goblet, as a muscular,
sackcloth covered arm encircled his waist, and a large calloused hand
gripped the black cotton of his gown lifting it up to reveal the
knight’s long bare legs and, still pink, and tender buttocks. 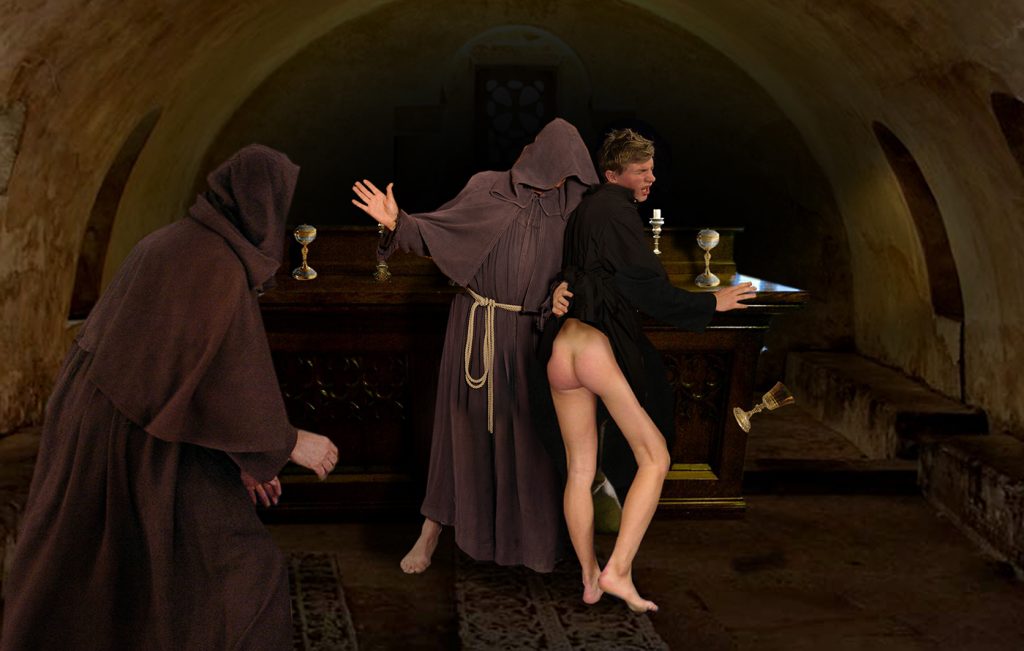 Then
before Chrispin could react the monk’s free hand descended with
considerable force onto that same vulnerable bottom, causing our
flawed but handsome hero to cry out in pain.
“Now
we will show you what happens to naughty young knights who try to rob
the poor!” boomed the angry friar, with a tone in his voice which
made very clear, Crispin would not enjoy what happened next.
TO
BE CONTINUED
More
of Singeing Crispin Cherrybutt will be posted tomorrow

4 Replies to “The Singeing of Chrispin Cherrybutt (Part 3)”