Skip to content
The
Sting of the City (Part 3)
(More of the Sting of the Jungle series)
Breaking
into Marc and Kam’s apartment was easy for Boy, because of his long
practised climbing skills he was able to reach an open window, which
would have challenged the most nimble cat burglar. However, he did
not have the common sense, or cunning, to match his ability to climb,
so it did not occur to him that there might be items on the window
sill, which would clatter noisily if knocked over, or that the two
men might have been expecting him.

Having
made enough noise to alert the most unsuspecting householder that
there might be an intruder, Boy crept into the hallway, hoping that
the men might be asleep and he still had the element of surprise. Of
course, he was out of luck.
Boy
froze as an amused voice behind him spoke “Good morning Guy!, I
wondered if you would pay us a visit. Now if you could drop that gun
I might not have to shoot you!”
Boy
turned round and saw a grinning Marc Temple standing behind him,
holding his own gun which was pointing straight at his groin. Boy’s
first instinct was to try and shoot Marc first, but realised just in
time that, before he had even had time to raise his gun, Marc would
almost certainly have time to fire a bullet into him, and from the
angle Marc was aiming it would be his much prized manhood which took
the impact.
Reluctantly
he loosened his grip on his gun and let it fall to the floor. 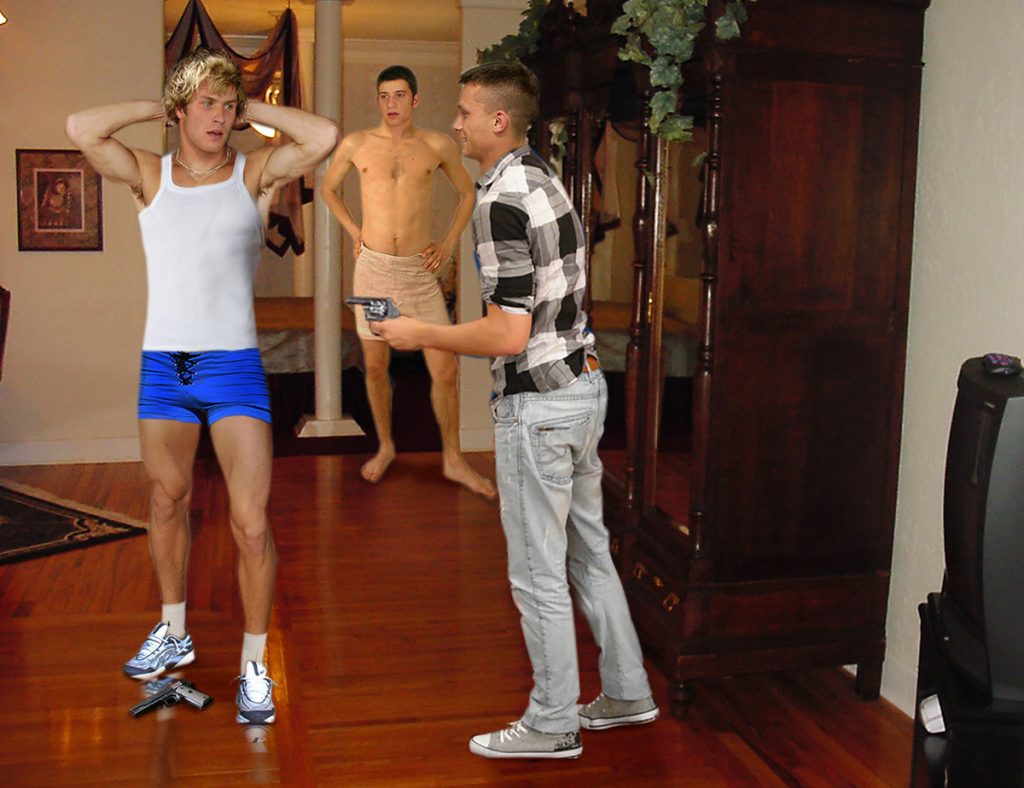 At
that moment, Kam appeared at the doorway, having apparently been in
the shower. “I see we have a visitor!” he said.
“A
visitor who was planning something very nasty!” replied Marc
looking down at Boy’s discarded gun “But, don’t worry Guy, we
forgive you, don’t we Kam?”
Kam
raised an eyebrow quizzically, not sure what Marc had in mind.
“In
fact”, continued Marc, “To prove there are no grudges, we are
going to give you a tennis lesson!”
“What
the fuck are you talking about?” sneered Boy, keen not to show any
fear.
“You’ll
see!” replied Marc “but first, you won’t need your clothes …
now strip”
Reluctantly,
and glowering furiously Boy obeyed, removing his t-shirt, shorts and
sneakers, leaving only his jockstrap and socks.
“Great!”
laughed Marc “Now lets go play tennis” he motioned with his gun,
pointing to a door at the end of the hall.
“Don’t
start without me!” chuckled Kam hurrying into the bedroom to get
dressed, “this should be fun!”
A
very unhappy and apprehensive Boy walked slowly towards the door
which Marc had indicated. Upon opening it he saw a narrow staircase
leading downwards.
“one
real bonus to our apartment! Said Marc “is that we have sole access
to and use of the basement which we intend to convert into our …….
er … games room!” he again gesticulated with his gun “The
janitor is not around at weekends, so we will not be disturbed. Go
on, you can lead the way!”
Boy,
followed by Marc, walked down the stairs, which, after passing three
sealed doors to other floors in the building, led into a large and
mostly empty cellar.
“Roll
that barrel into the middle of the room!” ordered Marc, speaking
with a newly dominant tone, and pointing to an old wooden barrel by
the wall.
“What
for?” asked Boy grudgingly
“Do
as you are told, if you don’t want a lead implant!” shouted Marc
aiming the gun at Boy’s groin again.
The
barrel of the gun and the clear threat in Marc’s voice was all the
incentive Boy needed to do as he was told. He tipped the barrel on
it’s side and rolled it top the centre of the room. As he was doing
so they were joined by a barefoot Kam, who had hastily donned a
T-shirt and jeans.
Once
the barrel was in place the men ordered Boy to lie face down over it
and then proceeded to tie him over it with ropes which were
conveniently lying by the wall. While doing so, they tightened the
ropes around Boy’s legs, so that his jockstrap framed bottom was
spread and exposed. Boy could feel the cold air on his most intimate
parts and cringed knowing his light anus was now fully visible to
these two gay men.
“Ever
heard the expression ‘we’ve got you over a barrel’ Guy?” asked Marc
with a grin “well, now it’s for real, and we can do whatever we
want!”
Boy’s
mind raced, imagining what they might have planned for him, every
option which occurred to him more frightening and unpleasant that the
previous one. None, however, came close to what the men actually had
in store for him.
To
his horror, Boy heard a rumbling sound, as some large contraption on
wheels was pulled across the room. In vain he tried to peer over his
shoulder in order to see what had been placed behind him, but because
of the way he was tied down he was unable to look back far enough to
see what was there! 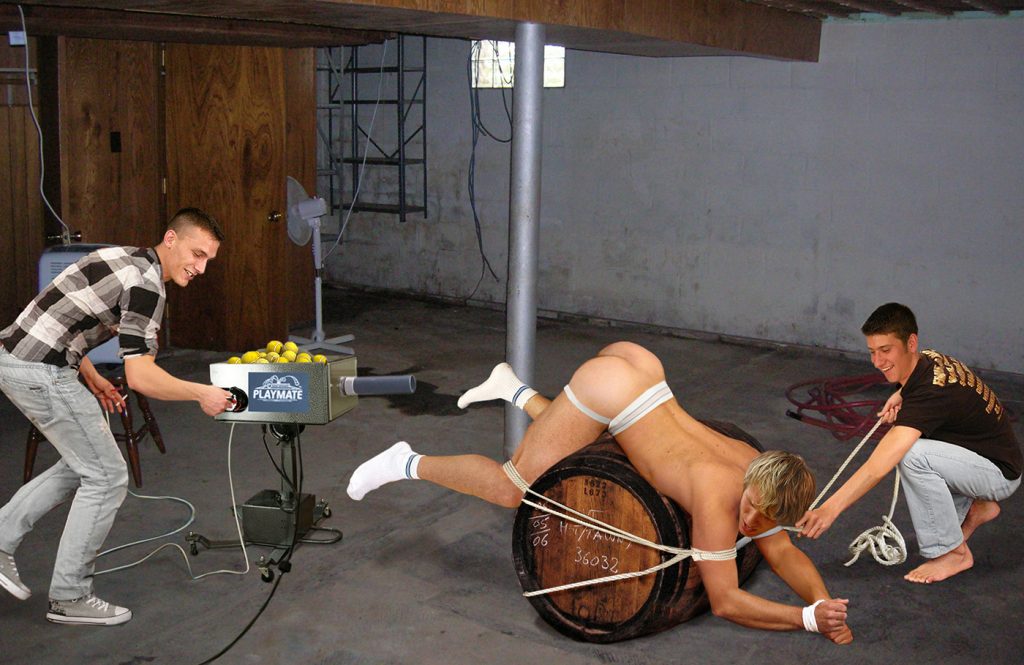 “W…What’s
that?” he asked, unable to control the tremor in his voice “What
are you doing?”
“It’s
a tennis ball machine!” replied Marc “we use it to help improve
our swing!” 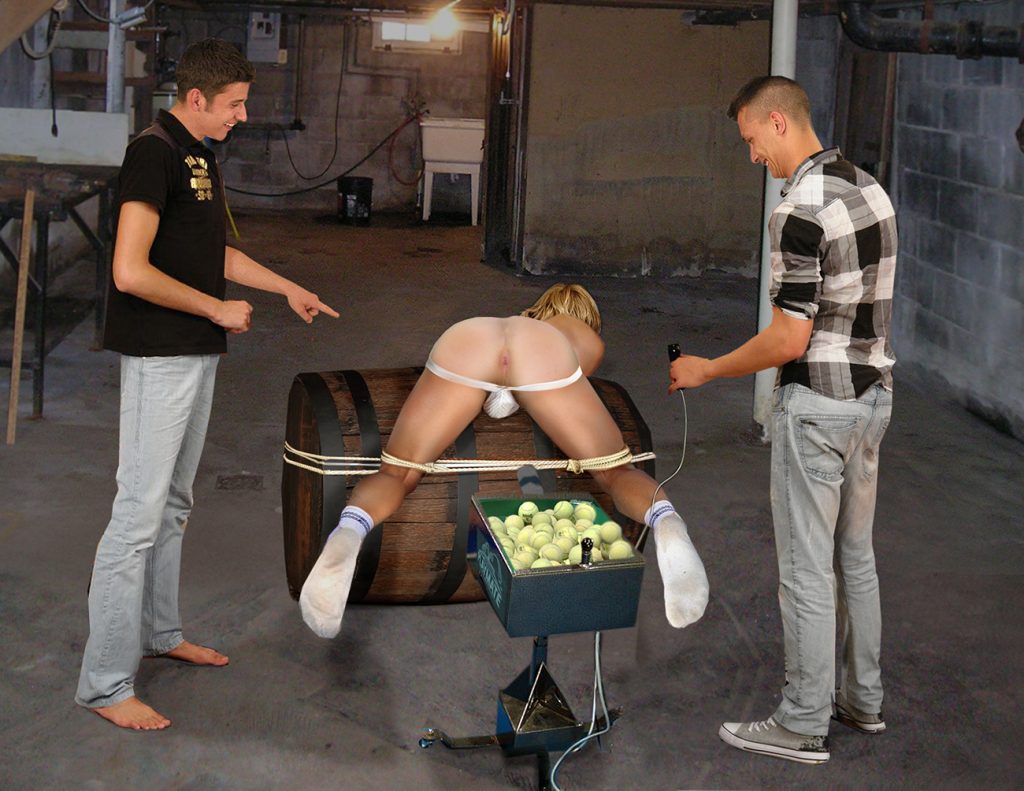 “You
have probably noticed we have quite effective swings!” added Kam
“It’s
a clever little machine, it shoots out tennis balls which we have to
hit with out racquets”. Explained Marc, “You have to be fast, as
the balls travel at a speed … especially when I turn it up to
maximum! ….. allow me to demonstrate!” 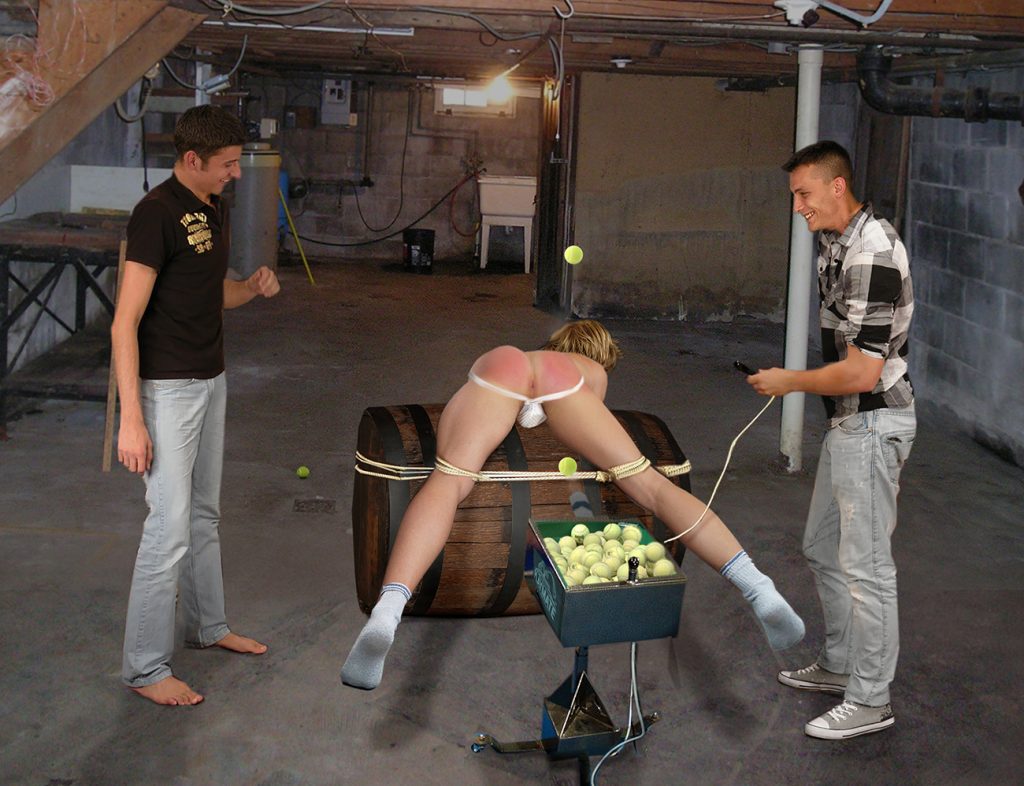 He
pressed a button on a control pad, and a ball shot out of the
contraption behind Boy and hit him with a hard “WHAM!” on his
upraised behind.
“AAAOWCH!”
yelled Boy
“See
what I mean!” smiled Marc “Now we can play a game, however, as
you haven’t got a racquet, you can use your butt to stop the balls!”
He pressed the button again sending another ball hurting towards Boy,
and bouncing off his bare bottom with a loud “THWACK!”
“As
I said I can vary the speed, and if I set it on automatic it will
shoot out a ball every five seconds!!” he pressed the button again
and another ball whammed into Boy’s butt cheek, leaving a circular
red mark next to the previous two. “However, we might do that
later, for now we will keep the controls on ‘Manual’ so we can test
our aim!”
“Stop
it you Bastards!” yelled Boy “That fucking hurt!”

“And
this will hurt even more!” replied Marc as he pushed the button
twice in succession, sending two balls hurtling out out of the
machine, one after the other and hitting Boy’s behind on the same
spot, a fraction of a second apart.
“what
you were planning to do to us, with that gun, was a lot worse than
we are doing to you!” shouted Kam “so you deserve this!” He
turned to Marc, “Give me the control, it’s my turn!” 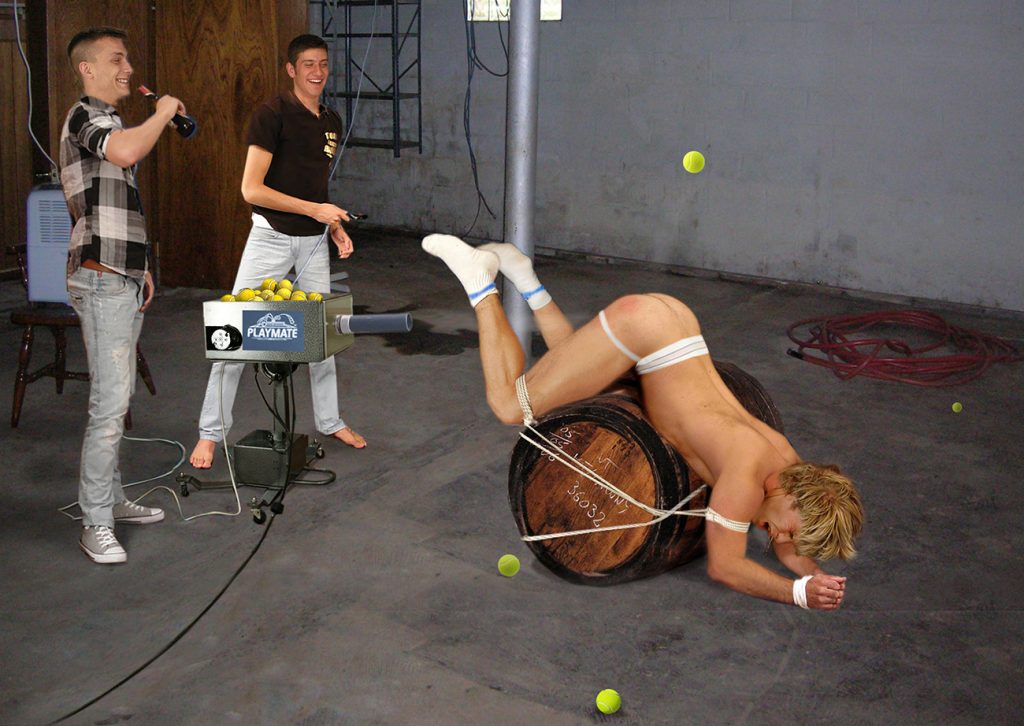 Marc
handed him the control, and Kam, who, in turn, fired a series of
tennis balls at Boy’s now very sore bottom
“And
you present such a tempting target!” added Marc
“I
spot an even more tempting target!” laughed Kam, pointing at Boy’s
little pink anus which was exposed due to the way boy’s legs and butt
cheeks were held apart by the ropes. “How do I aim this thing?”
“use
the blue dial, next to the red button!” replied Marc “it controls
the angle of the pipe the balls come out of!”
Kam
moved the dial slightly, as instructed, and pressed the button,
sending a hard round tennis ball, shooting towards Boy and hitting
him hard in the middle of his right butt cheek.
“Damn
Missed!”
He
tried again, but this time succeeded only in hitting the top of Boy’s
thigh, just where it connected with his left butt cheek, this was an
especially sensitive area and Boy screamed in pain.
“Here,
give it to me!” said Marc “let me do it!”
Taking
the control from Kam, Marc fiddled with the dial and again pressed
the button, but aiming the device at such a small, tight target was
more difficult than he thought and again, one tennis ball missile
after another whammed into the reddening cheeks of Boy’s bare bottom.

“Damn
thing!” he muttered “It’s designed to shoot the ball out at
different angles to challenge the player, but I should be able to aim
it!” 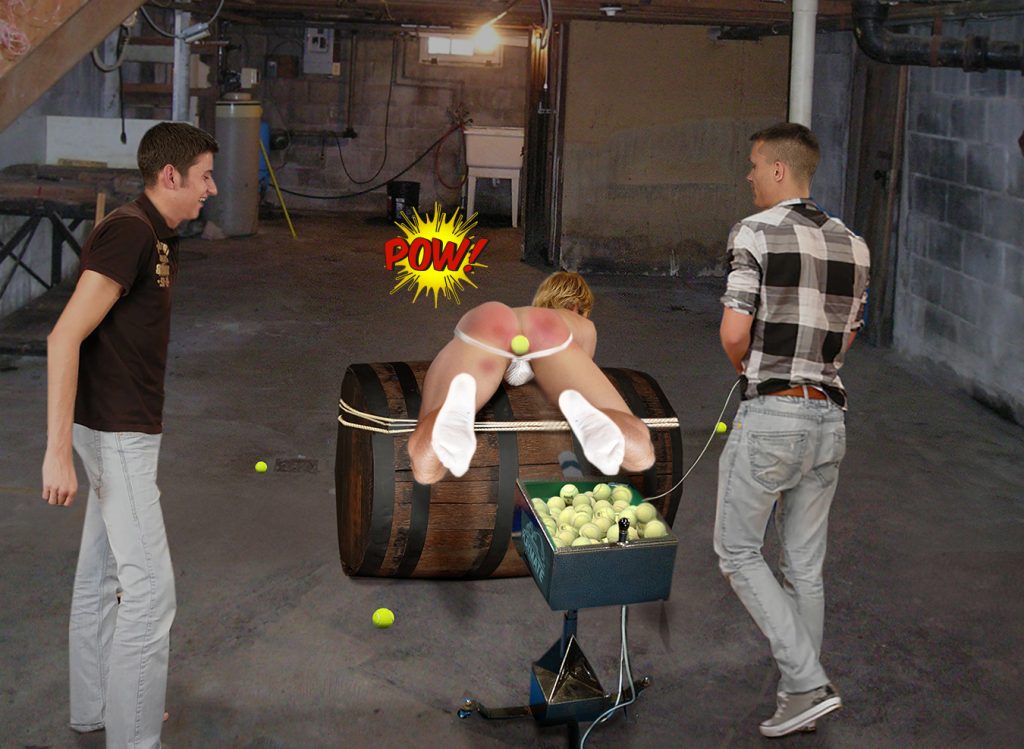 He
tried again, gently moving the dial to one side, and held it still
while he pressed the button with a free finger. This time the ball
was right on target, it shot out of the funnel at the front of the
machine, hurtled through the air and collided with Boy’s delicate
puckering portal with a bruising “BAM!” sending an electric like
shock of pain shooting through Boy, from his prostate to his jaw.
Boy
yelled in agony, as the two sadists cheered in delight. “Bullseye!”
yelled Marc “He will have felt that!”
Let
me have another try laughed Kam, reaching for the control.
Boy
now realised that Marc and Kam were enjoying themselves, and were not
going to stop, he was either going to get out of this situation, or
these men were going to do him serious injury, or maybe worse. He
knew that many young men went missing each year in America, and
frantically wondered how many of them had fallen victim to the likes
of these two.
Summoning
up all the strength in his arms, developed over his years growing up
climbing trees and swinging on vines, he strained his muscles and
pulled on the ropes attaching him to the barrel.
At
that moment, Kam pressed the controls and sent another tennis ball
flying at Boy’s behind. Although this ball, again missed his anus,
it bounced off his left cheek with a violent “Thud!”. The blow
sent a searing surge of pain shooting through his body and, as if by
a miracle, the impact, gave him the extra strength he needed to break
the ropes holding his wrists and ankles and freeing him.
He
leapt to his feet and swung round to face the men, and, as he did so,
realised that Marc no longer had his gun in his hand. Confident that
Boy could not escape, Marc had placed it on a table at the side of
the room, and now both Marc and Boy dived for it.
By
far the more agile, Boy reached the gun first, grabbing it he turned
to face the other two.
“I
should kill you bastards!” he hissed
“Do
that, and you really will go to prison Guy!”
“No
I won’t, I am going home!” snarled Boy “fuck this damn city!”
he paused “Give me your wallets!”
With
the weapon pointed at them, the men had no option other than to obey
and handed over their billfolds. Boy quickly rifled the wallets with
one hand, whilst keeping the two angry men at gunpoint with the other
before stuffing a wad of notes and two credit cards into the front
pouch of his jockstrap.
He
then ordered Kam to tie up Marc, before tying up Kam himself, he
couldn’t allow the guys to call the police before he had made his
escape. 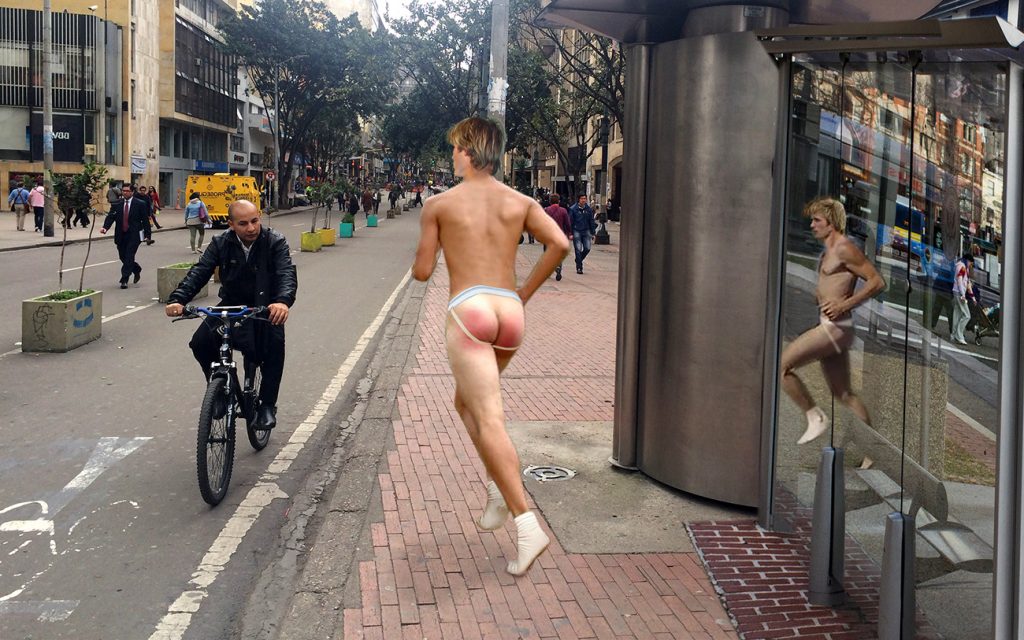 Leaving
Mike and Kam tied to chairs, where they would remain until the
janitor arrived the next day, boy climbed out of the basement window
and ran off down the street, causing a lot of surprised glances given
his scanty attire and bright red bottom. 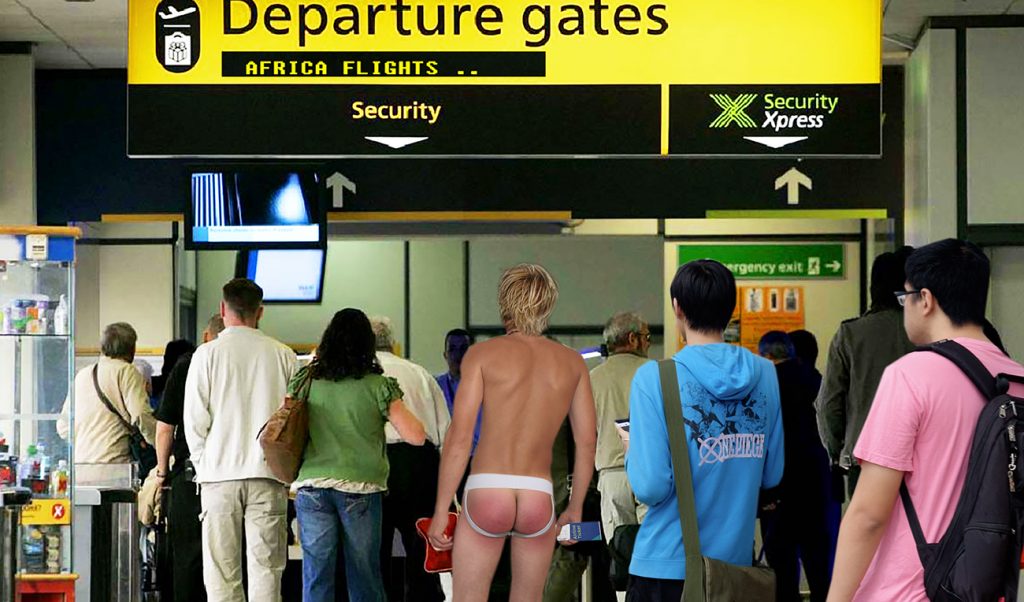 Two
hours later. Boy was at the airport, holding a one way ticket
purchased with one of the men’s credit cards, and queueing for the
first flight back across the ocean to the relative safety of the
jungle.
________________
The
Sting of the jungle will continue.