Skip to content
Continuing
the Sting of the Jungle Series
It
was early Friday evening and most of the staff at the brokerage firm
where Boy now worked had left for the weekend. Usually Boy would
have been one of the first out the door, keen to spend his wages,
rent money, and undisclosed additional income in the clubs and bars
of the Upper West Side, enjoying the company of the scantily clad
girls and women who always crowed around him due to his good looks
and lavish spending habits.

However,
this Friday Boy had stayed late in the office, he had received a
mysterious memo instructing him to attend a special out of hours
meeting on the executive floor. Boy was curious to know what the
meeting was about, and why he had been invited. Arrogantly, and with
a startling lack of self awareness, he wondered if he was in line for
a promotion or bonus. Although, in truth, his standard of work could
hardly warrant a reward of any sort.
Had
he been so tardy and careless with his chores back in the jungle,
Tarzan would certainly have toasted his little bottom, however,
nothing like that was going to happen in the city, or so Boy thought. 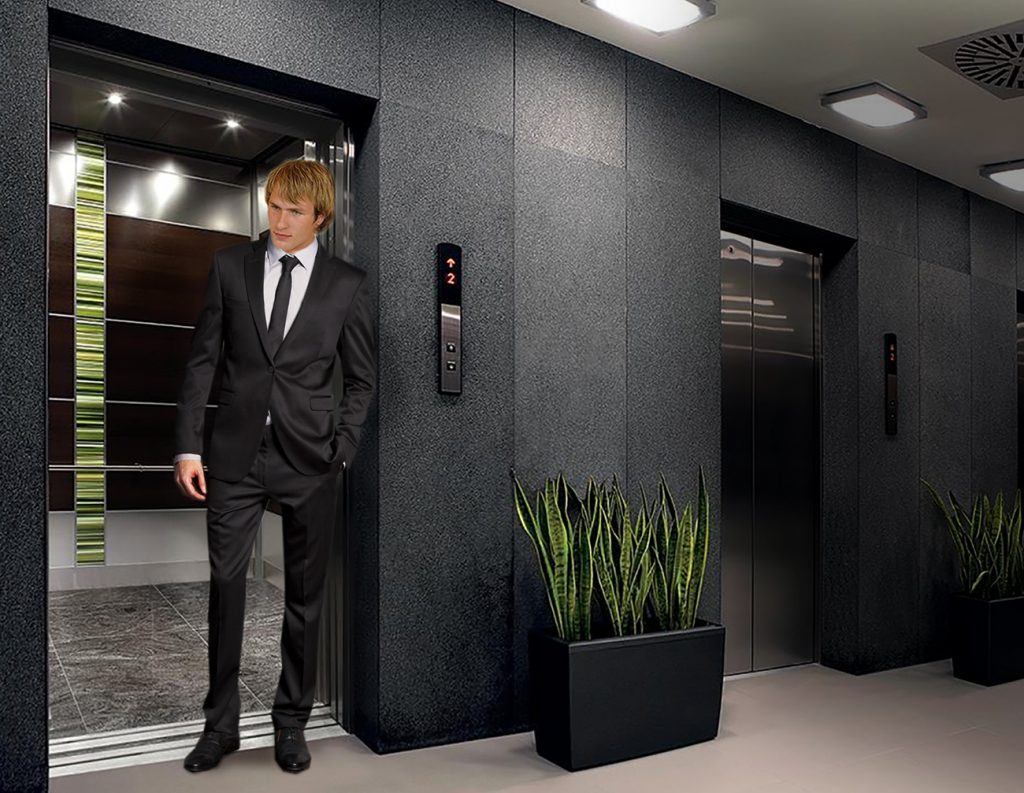 Just
before six thirty boy took the elevator to the 18th floor,
the executive floor, where the meeting was due to take place, he
glanced at himself in the mirror, and was pleased he looked so hot
and handsome in his new, black, designer suit.
When
he was in the jungle, Boy had no interest in his appearance, but
since he had been in the city, and discovered how women responded to
his handsome looks, he had added personal vanity to his long list of
character flaws.
He
smiled to himself, confident that his appearance would impress the
bosses he was about to meet with.
What
Boy did not know, was that all the company executives were attending
a weekend team building seminar in Colorado, and the executive floor
was, therefore, unoccupied that evening.
When
the elevator arrived on the 18th Floor, Boy made his way
to the office where he had been told the meeting was to be held.
Expecting the room to be full of company bosses, he knocked on the
door rather than walking straight in.
“Come
in” said a strangely familiar voice.
Boy
entered the room and to his surprise, instead of seeing a room full
of a room full of company executives and bosses, as he had been
expecting, the only people there were, as he would put it, “that
weedy Marc Temple guy from the office and the Polish faggot from IT”.

Boy
was angry, he had stayed late in the office on a Friday hoping for a
reward or promotion, not to have a meeting with two insignificant
jerks. “What do you morons want?” he sneered.
“Ah
Guy!” smiled Marc “Thanks for accepting our invitation, we have
something we would like to show you.”
“Can’t
it wait until Monday? I have plans!”
“I
think you will want to see this now” replied Kam, pointing at a
computer screen.
Making
no effort to hide his irritation Boy stomped across the room, and
looked at the monitor Kam was indicating. At first the jumble of
data made no sense, but then as what he was looking at began to
become clear an icy chill ran down the handsome blonde lad’s spine.
The
data Kam was showing him detailed each time Boy had secretly syphoned
funds from the company account and paid them into his own bank
account. He had thought he had been so clever, by only diverting
small amounts each time, but Kam’s report had highlighted every time
he had done it. 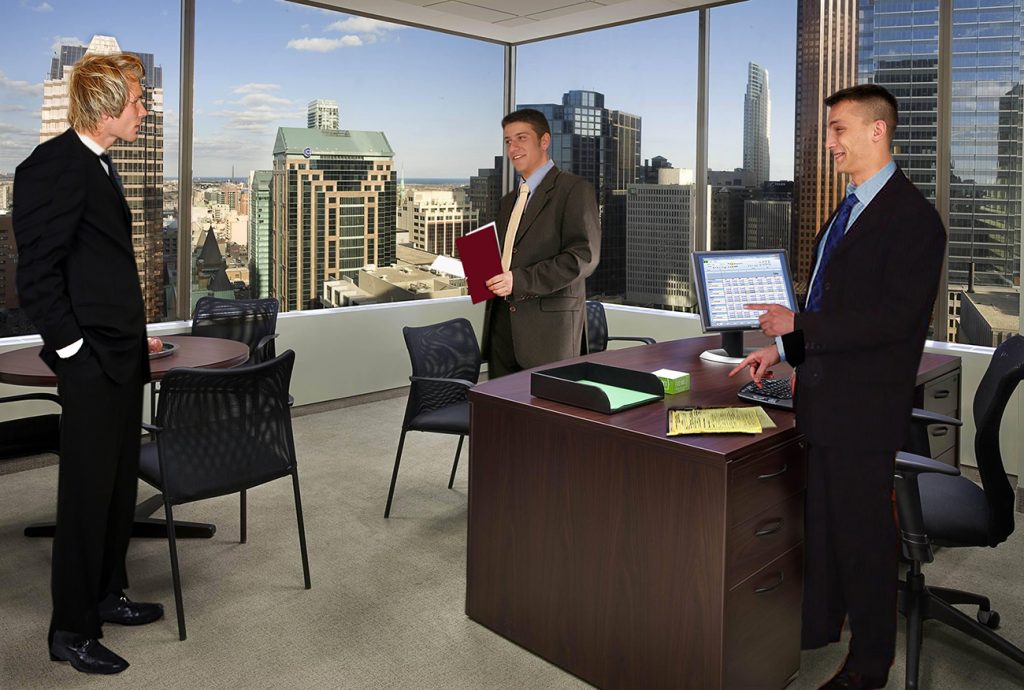 “That’s
quite an amount you have been stealing from the company Guy”
grinned Kam, “Just under $30,000 in two months, …. you being so
greedy made it easier to spot”
“I
would guess that would be worth about five years in prison!” said
Marc, unable to hide the glee in his voice “Probably more given
your betrayal of trust!”
“Prison
won’t be fun!” murmured Kam “What with you being such a pretty
boy and all!” he laughed “Your little butt will get screwed by
every con in the joint!”
Boy
was stunned, he couldn’t believe that his genius plan had been so
easily detected. His initial reaction was that this was some sort of
shake down, and he began calculation how much of his ill gotten gains
he could offer these grinning fags to keep them quiet. The evidence
was to clear to deny, so he had to make a deal.
“Okay,
okay Guys!” he snapped, furious at being caught out, whilst trying
and failing to sound reasonable “how much do you want?”
“We
don’t want your money Guy” replied Marc “We want your butt!”
“Fuck
off!” Boy almost snarled “I’m not like that!”
“We
don’t want to fuck you fella’! … well, maybe another time”
laughed Kam “Right now we are going to spank you!”
Boy
stepped backward, as if struck, those were words he had hoped never
to hear again. “No chance you ….. you … fuck!!” he stammered
“That’s not happening!”
“Either
we spank you, or you are going to jail Guy!” sneered Marc
“Where
all the cons will be after you as their bitch!” added Kam
“Guys
… guys … lets be reasonable about this!” said a now very
nervous boy.
“Drop
your pants!” relied Marc picking up a wooden ruler from the desk,
and sitting down on a conveniently paced chair next to a desk overlooking Central Park “and then get over
my knee!”
Boy
could see from Marc’s expression that he was deadly serious, that
ruler looked as if it had the potential to inflict a lot of pain, but
there didn’t seem any way of avoiding being spanked with it. To his
horror he saw that Kam was holding a rubber soled carpet slipper,
which he had clearly brought with him for the purpose of spanking
Boy’s butt. Tarzan had once spanked him with an old slipper, and he
knew how much they could sting.
Reluctantly
Boy unbuttoned his suit pants and let them slip down to his knees.
“And
your underpants!” ordered Marc “drop them now”
Marc
and Kam looked on in barely concealed delight, as the now very
miserable Boy pushed his thumbs into the waistband of his white
cotton underpants and slowly lowered them, exposing his cock and
balls as he did so.
Marc’s
sadistic instincts were conflicted, whilst being impressed by the
size of Boys equipment, he had secretly hoped this blond hunk would
have a small cock which would add to the humiliation of its exposure,
yet, at the same time he relished the prospect of belittling and
punishing such a perfect, and well proportioned, specimen as the
beautiful young man, now standing before him with his underpants
around his knees.
“Now
get over my knee!” he snapped
“You
can go over mine next!” laughed Kam, smacking the slipper against
the palm of his hand.
“You
bastards will pay for this!” snarled Boy as, knowing he had no
other option but to obey, he shuffled angrily towards the sneering
Marc, and laying face down across his knee.
The
two men then took it in turn to spank Boy’s bare and, as ever, very
tender, bottom. 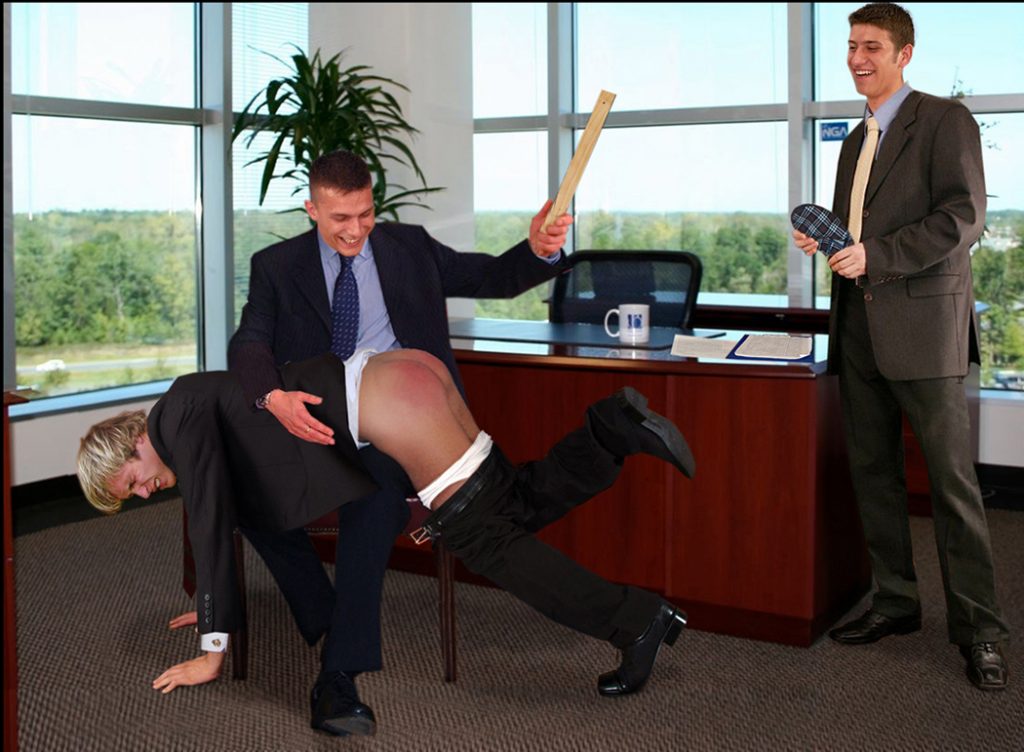 First
Marc gave him twenty four swinging swat with his wooden ruler, as Boy
struggled and kicked over his lad, and Kam stood watching. 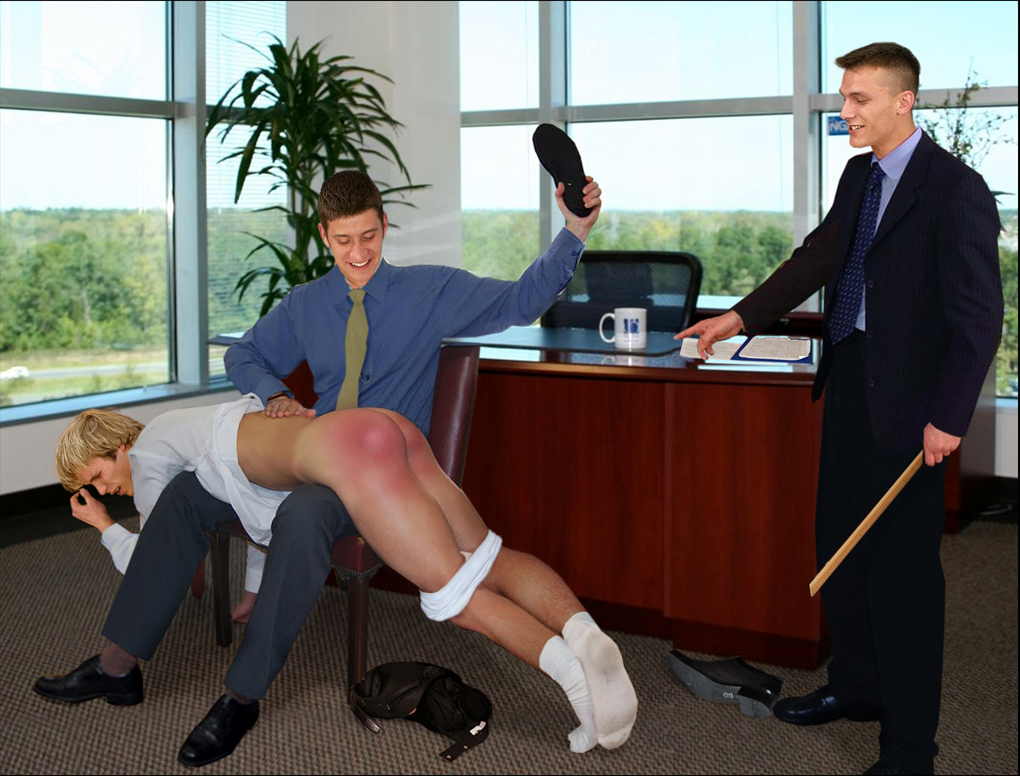 Kam
then took Marc’s place and began whacking Boy with the rubber soled
slipper, as Marc watched, laughing and calling out encouragement as
he did so.
Boy
was seething with anger, he had left the jungle to escape from Tarzan
and the thousand different creatures which kept hurting his bare
bottom, and now here he was on the 18th floor of a New
York skyscraper, 4,000 miles from the jungle, getting his bare butt
spanked by two sniggering gay boys!!
After
he had finished spanking Boy with the Slipper, Kam followed by Marc
gave Boy a firm hand spanking, which, in both cases, culminated in a
rapid fire series of fast hard slaps to reinforce the message.
Throughout
the ordeal Boy was ordered to remove various items of clothing, until
at the end he stood totally naked before them clutching his sore and
well spanked bottom.
He
had hoped that, by escaping to the city he would never have a sore
bottom again, how wrong could he be?!!
“Have
you done?” he mumbled knowing, despite the growing fury in side him
that he now had no chance of regaining any dignity in front of these
two.
“Done?”
echoed Kam “Have we done?” the note of mockery in his voice so
obvious that Boy’s initial, and barely controlled impulse was to
knock his teeth down his throat.
“No
Guy” smiled Marc, “We haven’t ‘done’ … not close!”
“W…what
…. but you just spanked my ass!”
“One
little spanking, won’t cover what you’ve done!” he paused to enjoy
the pleasure of watching the horror spread across Boy’s handsome face
“We plan to spank you whenever, we feel like it, wherever we decide
to, and with whatever we chose!”
“And”
added Kam “I think we are going to feel like it quite often!”
“No!
You can’t do that …..!!” spluttered Boy
“Your
choice fella’” Replied Kam with a shrug “Either you take the
spankings, or you are going to prison!” 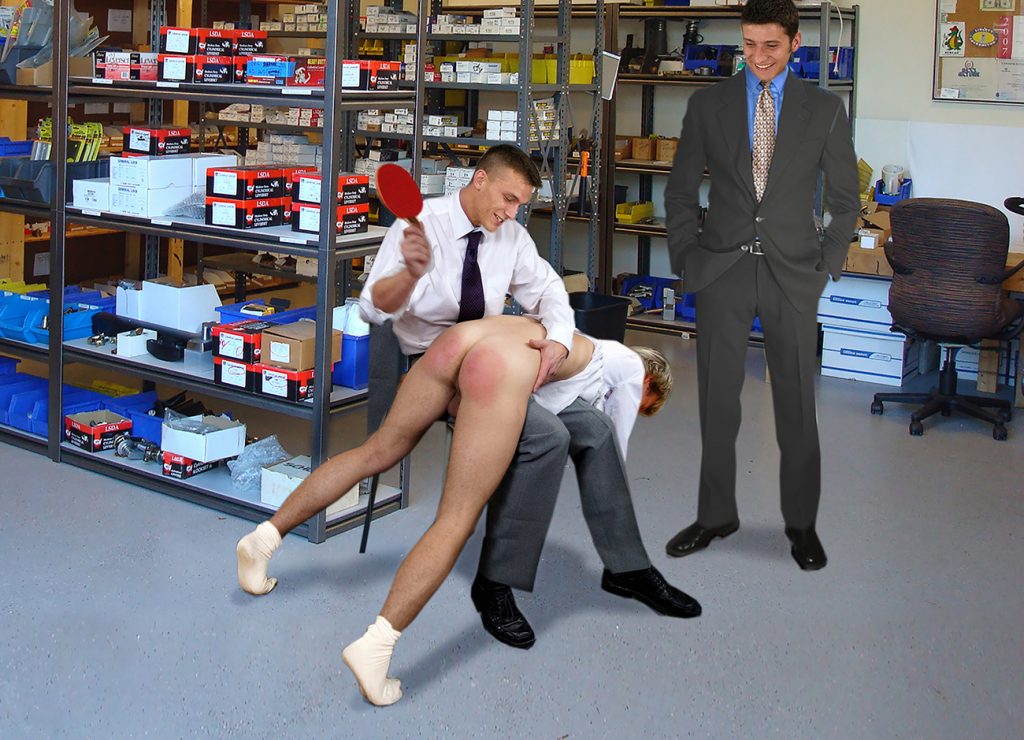 Of
course, Boy had no option gut to submit to the couple’s demands, and
over the next week he would receive at least on text or e-mail from
Marc or Kam instructing him to either stay late after work or meet
them in some unoccupied room within the office, such as one of the
the basement stock rooms, where he would receive yet another stinging
spanking.
Within
days boy’s behind was so well spanked and sore that the sting never
faded, and he literally could not sit down without discomfort. 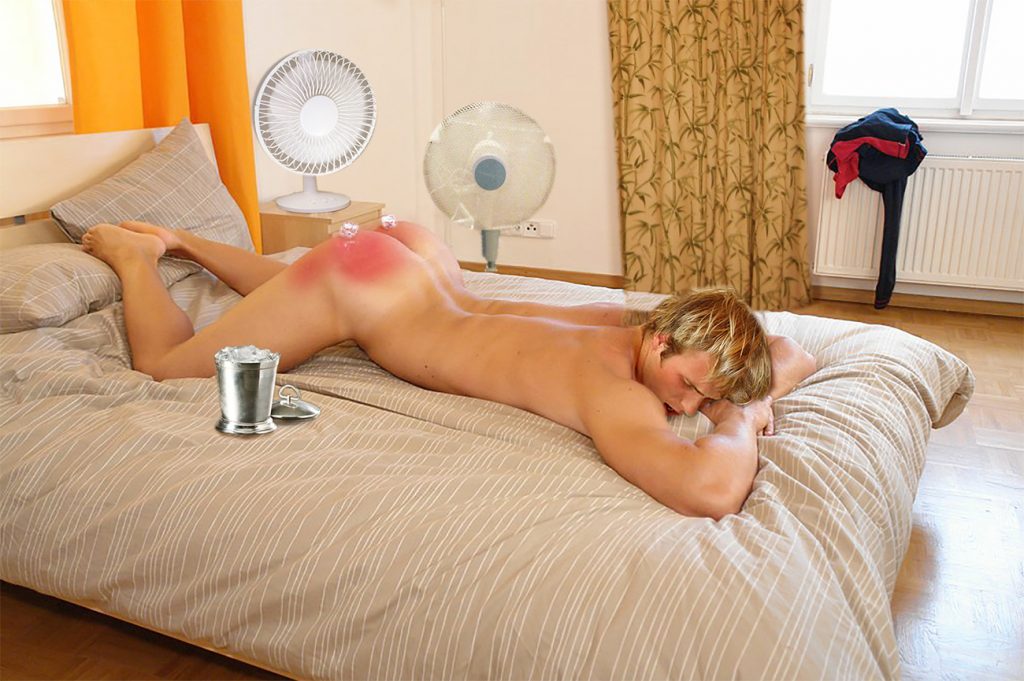 By
the following Friday evening, as Boy lay face down on his bed trying
to cool down his burning bottom with fans and ice cubes he knew he
was going to have to take drastic action to bring this situation to
an end.
Boy’s
bad luck had followed him across the ocean, he was being blackmailed
by two men with genuinely sadistic instincts, and limited compassion.
The guys were clearly enjoying their sadistic pleasures and also
having such extensive power over him. He knew they would not stop and
that if he didn’t obey their orders they would make good their
threat, and enjoy doing it.
His
only option was to stop them, permanently.
************
Despite
the gun laws in New York, it had proved very easy for Boy to obtain a
gun. Even though he had only been in the country for a short time,
he had made some very shady acquaintances, including people happy to
supply him with a weapon and not ask any questions. 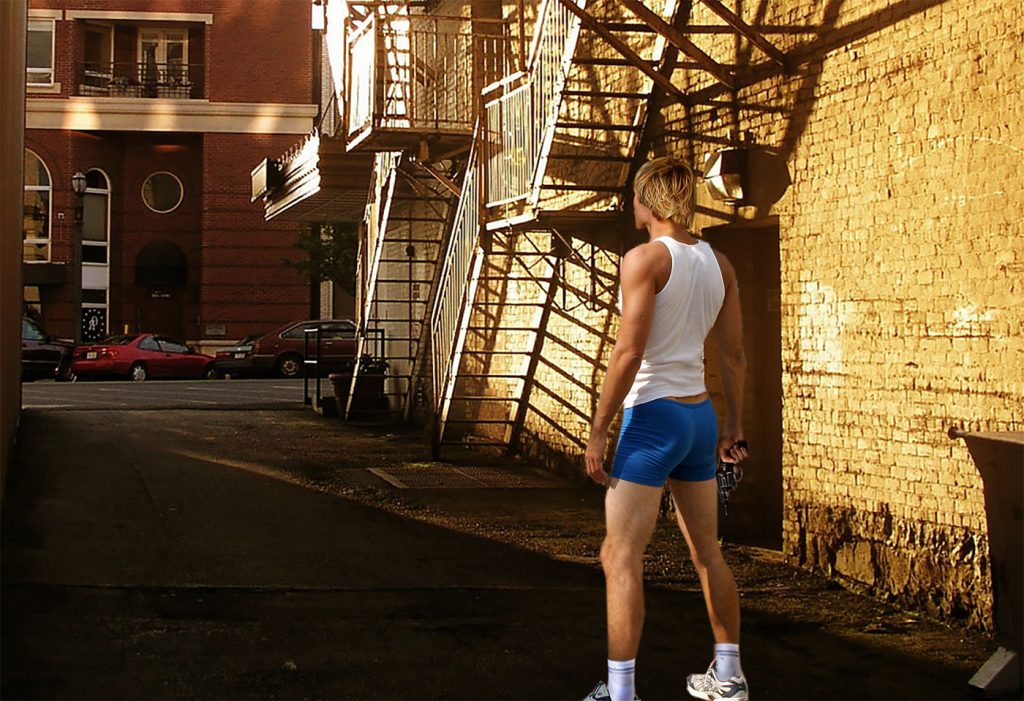 Therefore,
early the following Sunday morning, when he guessed that Marc and Kam
would still be in bed, he made his way to their down town apartment,
with a gun in his hand and murder on his mind.
***********
TO BE CONTINUED …….