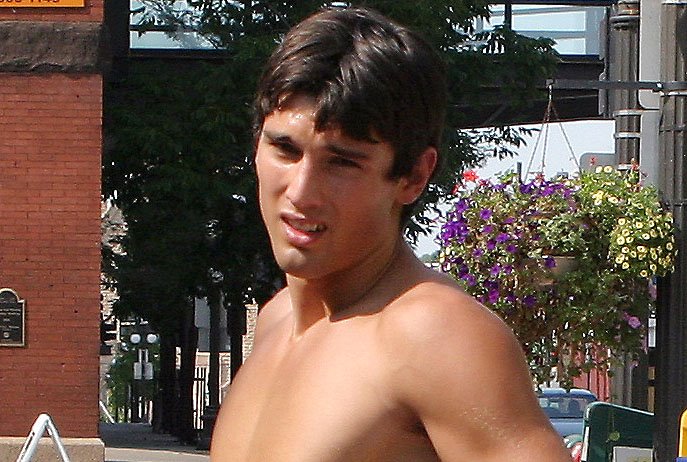 This is Josh Bradley, he is an arrogant, straight, college jock. At 19 he is captain of the hockey team and a major babe magnet. However, he treats women badly and loves to beat up on gay guys. Josh thinks he is really cool, but we think he is clearly overdue for a dose of bad luck resulting in a really sore bottom. But what misfortune should befall Josh which will cause his firm 19 year old bubble butt to become so sore? vote in the poll in the right hand column and you might really get to see your vote coming true.

You can vote as many times as you like, and the options are:

1) Spanking: Josh receives a humiliating bare butt spanking in front of his girlfriend

2) Injection: A mad doctor ties Josh across the examination table and gives him a series of painful injections in the butt

4) Stung on the butt : Josh sits on an angry hornet

6) Josh falls asleep in the sun, a gay guy pulls down his shorts leaving his butt to roast

8) a horse kicks Josh up the butt

Any further suggestions as to what should happen to Josh can be added to the comments section, or send an e-mail to
sorebottomedguys@googlemail.com.

You have 14 days to vote and can change your vote at any time. Let me know if you think this is fun. (If enough people vote it is possible that two or more of the above misfortunes may befall our unlucky hero – you decide quite how unlucky he is!)

43 Replies to “Poll: What should happen to Josh?”