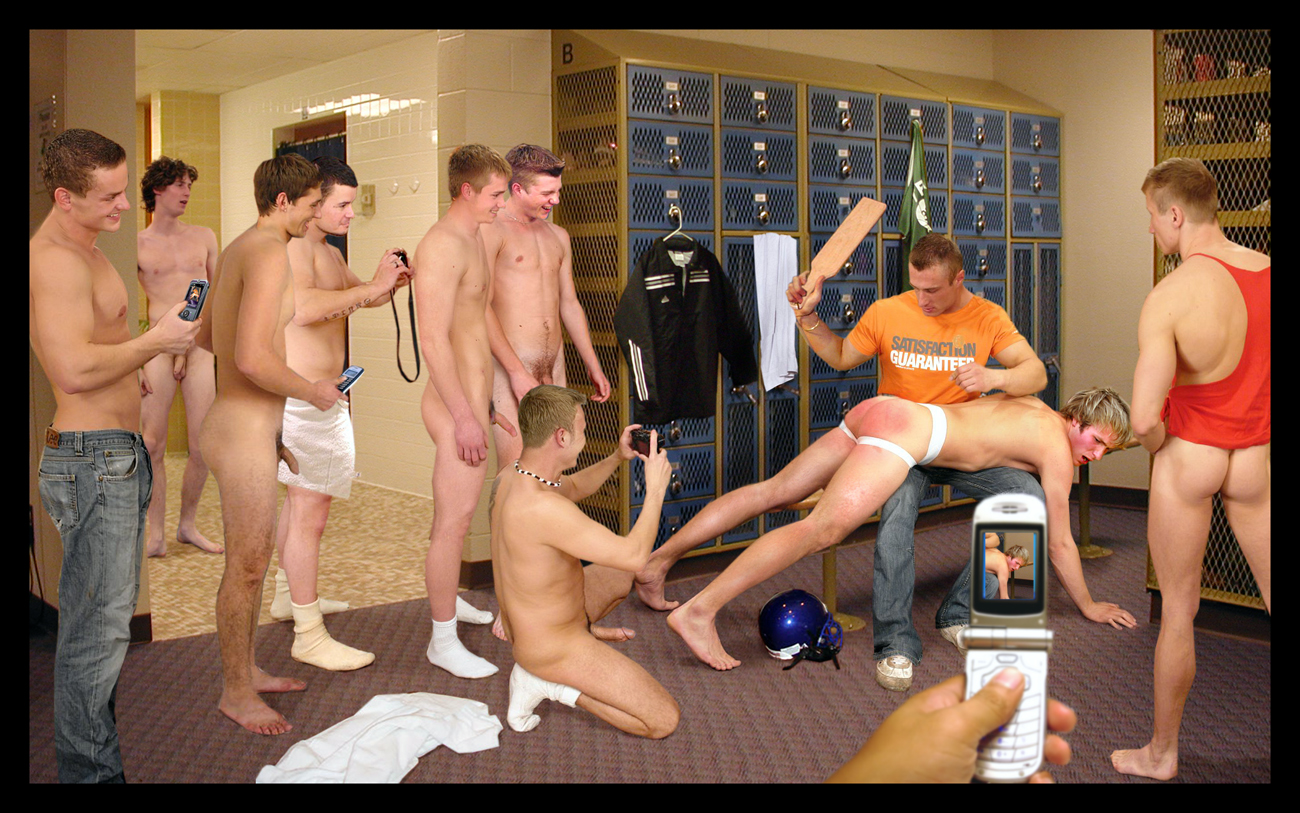 Anyone want to write a story for this picture?______________________
Update Sept 1 2011
Here’s a story by Colin which was too long for the comment’s section:
It was the first fall semester training session for the college sophomore men’s team in La Platte WI.  Those weeks of recess meant that the team were buzzing with news of their activities and concentration was not top notch.  In addition there was a new coach who wanted their attention and was determined one way or another to get the team shaped up in time for league victories as the season got underway.
The problem was Wayne. Like many good athletes he had a fine body mixed with good looks but he also had a massive ego.  He thought, no he knew, he was the star and he did treat his mates as acolytes.  Just before the recess there had been a good run of results and Wayne had featured several times in the local newspaper reviews. Some of it he deserved but his  personal coverage was helped by his steadily cultivating a friendship with the geeky sports reporter.  To add to the pressure, Wayne had been on vacation to California and had become obsessed with becoming a movie star.  He now courted publicity at every step.
Wayne would in fact become a star of movies but he was not yet to know this and also which industry he ended up with a starring role in but back to the team session for now.
Coach was having some trouble with the team and was stoking up his anger. One of the guys had quickly picked up on his Carolina accent and had mimicked it to his fellow players.  This was disrespect of the highest order and he knew he would have to keep this player Wayne in line.  Wayne probably wanted him to react instantly but Coach was able to  keep his anger down and not be drawn into any situation that he did not fully control. Coach was however going to sort this guy out before long.
Just before the end of the session, he suddenly realised that Wayne was not in the main field of play. Then he saw him – posing on the touchline with a friend taking photos. He called him over and told him if he ever got a hold of the camera that Wayne would not like the pictures taken. He got him back into play and the session continued.
Practice over, a team of sweaty guys, overheated in the still warm evenings headed back to the locker room and a welcome refreshing shower session.
Coach waited ten minutes before he went to the locker room knowing by that time that most guys would be washed and around the room in undress and mainly just with towels. As he entered the room he saw a photo flash and sure enough Wayne was posing once more with another guy busy taking photos.  Wayne obviously thought he was something and was striking various poses in his jockstrap.  He did not see Coach approaching until an iron grip had him by the shoulder.
So boy! you want to be the centre of attention the whole time and you want a record of it. This will be my pleasure to help you out.  Let’s make some pictures now.
Coach called for the guys to gather around quick and so it was a selection of guys in states of dressing soon gathered around.
Coach told the gathering that he was proud to be from the south where men were men and were made so in the woodshed and anybody wanting to disrupt his sessions would soon know the consequence of a trip to the woodshed.  He reached up with his free hand and produced a paddle from the top of the lockers.  At the same time he sat down on the bench and pulled Wayne clear over his lap in a classic spanking position.  All the guys were paying attention now as Wayne struggled and protested and made a lot of noise.
Coach made more noise as he swung that paddle hard onto Wayne’s butt. A few more swipes followed and the struggle of Wayne changed and his noise became howls. Coach stated he knew Wayne liked his pictures taken and so he called on all the guys to get busy getting the shots on the cameras and any phones they had with. Wayne was mortified. These were not the pictures he yet wanted but had no power to resist.
Coach paddled away until that butt framed by the white straps was cherry red. He had gotten their attention as every guy was focused on the action and some of the clips taken would soon be viral.
Wayne was sorted this time real good and he would learn not to disrespect Coach through his butt.  Coach also made a mental note to tackle Jason another time as he could see that boy close up with the camera had a prominent erection as he snapped away and Coach did like to mix punishment and pleasure but that was private and not known to the lads today.
Who wants to tell us about Coach and Jason?