Skip to content
The
Shaman’s Revenge Part 7 (2)
Jordan
Gets a “wheelbarrowin’”
As
part of the college’s new team building program the Capsaicin
College junior baseball team had been set a fund raising target with
the goal of building a new team club house. One way that the team
were raising funds was by offering to do menial jobs, such as
gardening, painting or even cleaning for members of the local
community.
That
afternoon, together their Coach, Coach Amundsen, they had been
visiting houses in Parkfield Avenue, and, by another of those spooky
and reoccurring coincidences, had just arrived at the Draper
household, where Mr Draper was just about to find some tasks for them
to carry out in his garage when they heard a loud Knocking coming
from the direction of the door.
Mr
Draper left the team in his garage and went to answer the door.
Returning minutes later and, to the amazement of the boys, he was
followed by a park ranger in full uniform pulling a very unhappy
looking, and totally naked, Jordan Draper after by a firm grip on his
ear.
A
number of the smaller boys had endured unkind taunts and bullying
from Jordan in the past, and grinned broadly at the sight of his
discomfort. “Schadenfreude”, the German tern for deriving
pleasure from the misfortune of others, can be a very satisfying
emotion. This is especially true, when that misfortune befalls
someone as deserving as Jordan Draper, the junior baseball team were
to experience Schadenfreude aplenty that afternoon, and would have an
even more satisfying spectacle to observe and tell their friends
about very soon.
Coach
Amundsen forced back the amused grin threatening to spread across his
craggy face, it seemed that young Jordan had got himself into trouble
yet again. The handsome young swimmers revolving cycle of painful and
embarrassing misadventures were starting to become almost comical.
Mr
Draper turned to the team, “Instead of giving you boys work to do”
he said “I think it is time to expand your education and show you
what happens to bad little boys who can’t behave themselves!” he
pointed to two small benches in the corner of the garage “can some
of you sit there please!, and the rest stand on the other side, so
you all get a good view!”
He
turned back to Jordan “As for the club house fund, Jordan is going
to donate this month’s allowance to that, aren’t you Jordan!”
Jordan
opened his mouth to protest but no words came out, he just stood
there with his mouth involuntarily opening and closing like a
particularly handsome catfish. On top of everything else he was now
going to lose his allowance fir a month, how could he survive that?!!
Mr
Draper sat down on an upturned metal barrel “I told you what would
happen Jordan!” he said “Now come over here and get over my
knee!”
Jordan
did not obey, he stood rigid, for a moment his only movement was to
nervously clench and unclench his fists, as he stared intently at the
floor. When he did move it was to step back, look up and turn to
face his father, a look of fierce defiance on his face.
“NO
FUCKING WAY!” he snarled “I’M NOT A FUCKING KID!, I’M
NINETEEN” he stubbornly folded his arms, adopting a post which was
supposed to appear rebellious, but, due to his nakedness, just looked
rather silly, albeit a little sexy at the same time. “YOU CAN’T DO
THAT TO ME ANY MORE!” He yelled. 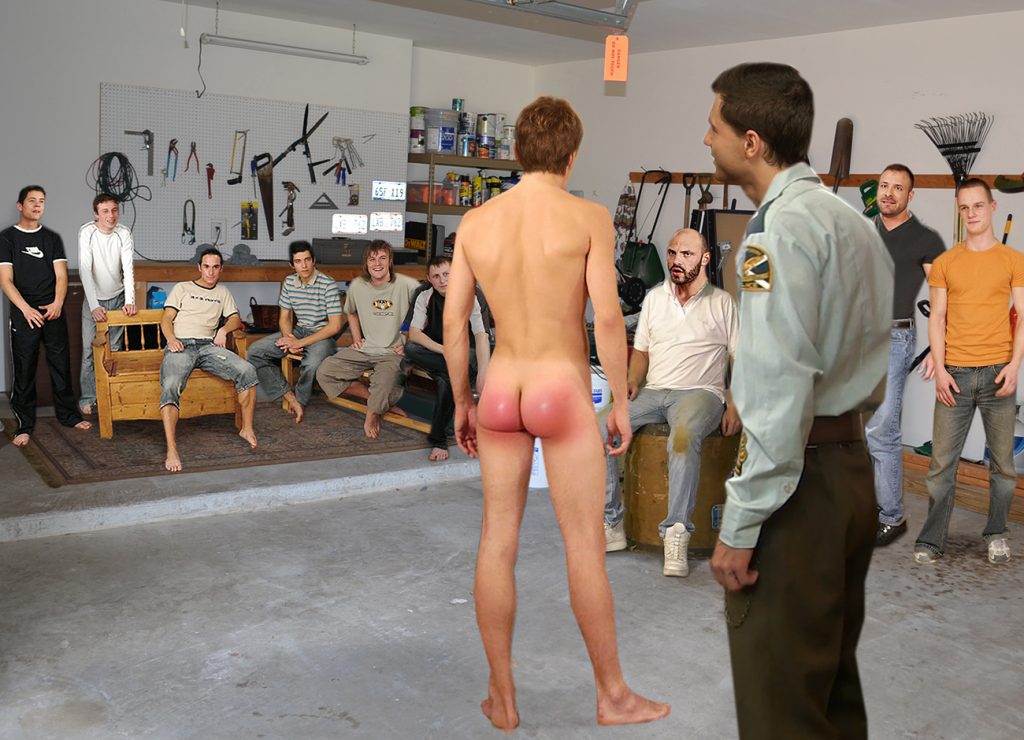 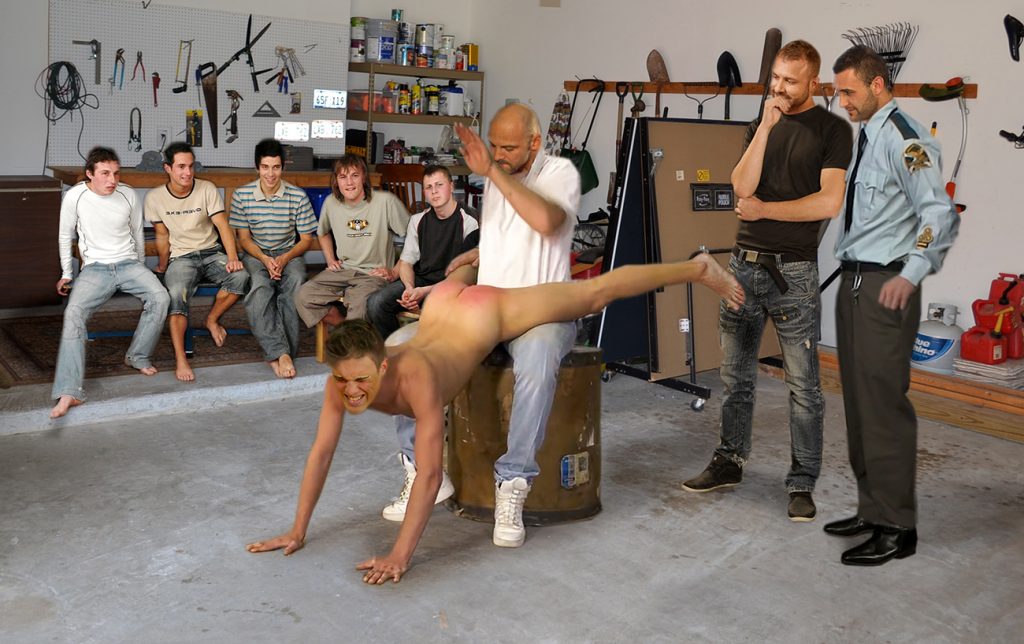 Jordan
did not have long to think about the possible ramification of having
a new neighbour, as his attention was immediately captured by an even
mire immediate issue as his father began spanking his upturned, and
very exposed bottom.
As
the spanking started, a loud ripple of laughter ran through the group
of excited young baseball players as they happily watched a spectacle
they had never in their wildest dreams expected to see.
Jordan
should have been fast becoming accustomed to humiliating situations,
however, there was no way that anyone with an ego the size of
Jordan’s would ever become used to being embarrassed, shamed and
humiliated. In fact with each new humiliation the cut became deeper
and more painful to his precious sense of pride.
The
wedgie spanking in front of the swimming and lacrosse teams had been
really embarrassing, and the the events in the clinic had been the
most humiliating thing to happen to him so far.
However,
this was a completely new level of humiliation, the position he was
in made him feel uniquely exposed and vulnerable and although the
baseball team were all over 18, to his 19 year old mind, they were
just snotty kids, it seemed even more shameful to be spanked in front
of younger boys.
The
situation was made even worse by the fact that his sunburnt,
pre-spanked and ant stung bottom was already on fire before his dad
had started smacking it!! 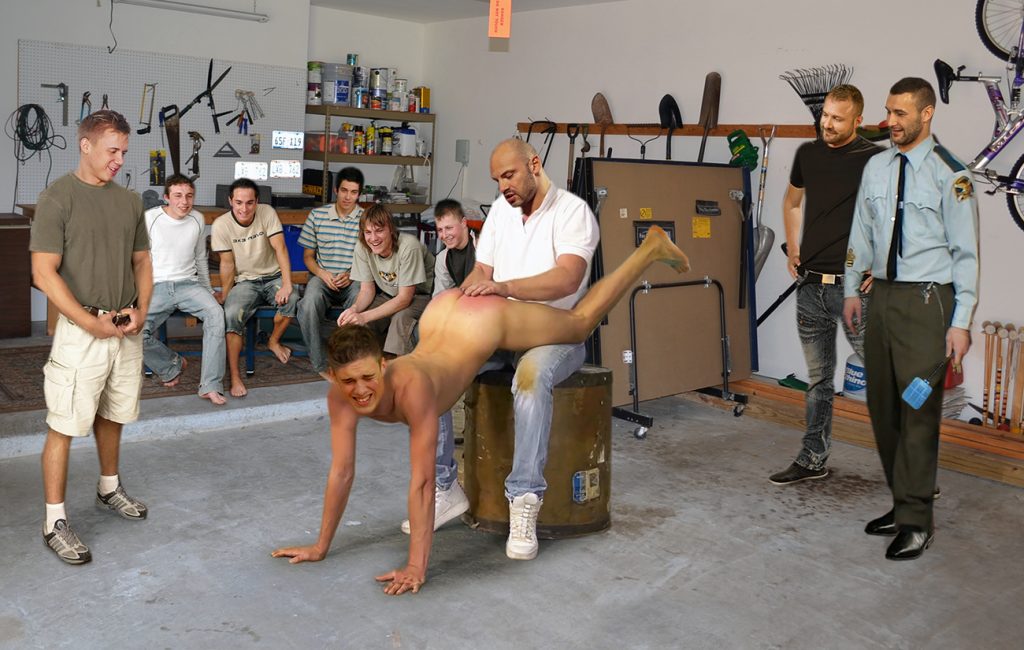 It
was then that a side door opened, and his two younger brothers
appeared, they had been attracted by the noise and had come to enjoy
the show. The two boys joined in the laughter, their enjoyment
increased by the back that it was their bullying big brother who’s
bare bottom as getting the treatment it had so long deserved.
Held
firmly in place and aware that any attempt at escaping would be
useless, Jordan’s only option was to endure, but it was unendurable!!
“STOP!
DAD!! … OOOOWW!! PLEASE STOP!! DADDY!! I’LL OWWWWW! BE GOOD! ….
OWWW! IT HURTS” he wailed, all attempt at pride now forgotten.
“HaHA!!”
laughed the ranger, “When they start squealing like little piggies
you know you are getting through to them!!!!
Jordan
looked up at the Ranger, a look of burning hatred in his eyes.
The
Ranger looked back with a slow cruel cruel, he then glanced away, and
fixed his gaze onto the the large sliding door an the side of the
garage where it opened onto the street.
As
he looked at it the door began to slowly slide open, the new remote
control device which Mr Draper had recently had installed seemingly
activated by the vibrations caused by his hand smacking his son’s
bottom.
Jordan’s
mouth fell open in horror as as he watched the door slowly glide
upwards into the roof. The garage opened directly onto the street,
if the door was open, anyone passing on the street would be able to
look in and see what was happening.
“Please
let the street be empty!” he thought frantically “Please, please
don’t let anyone be there!!” 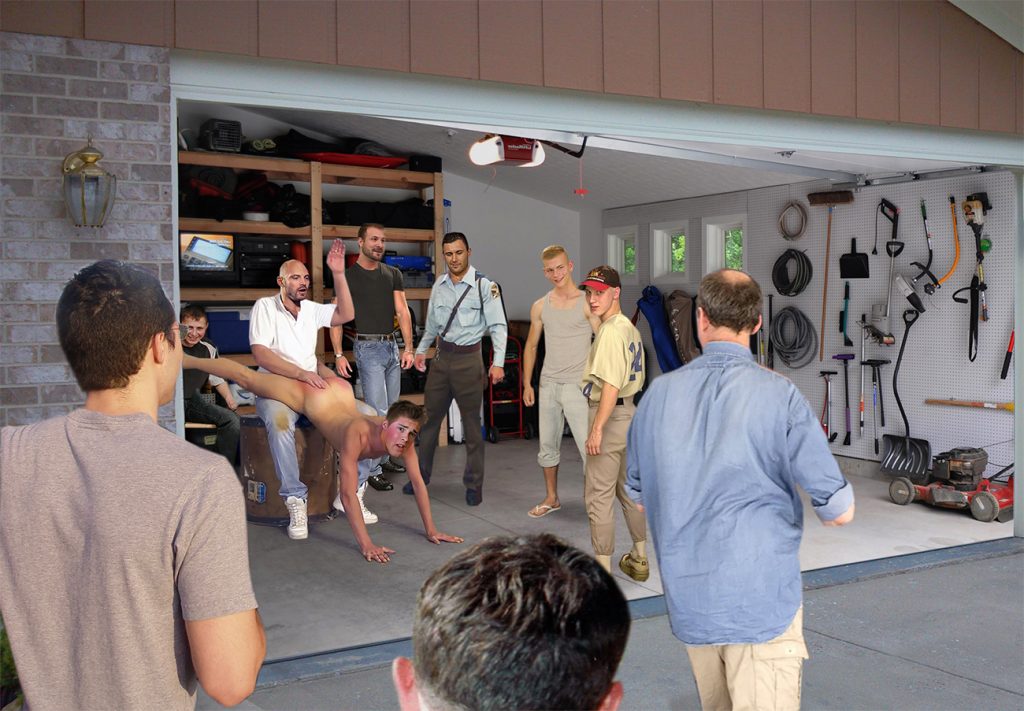