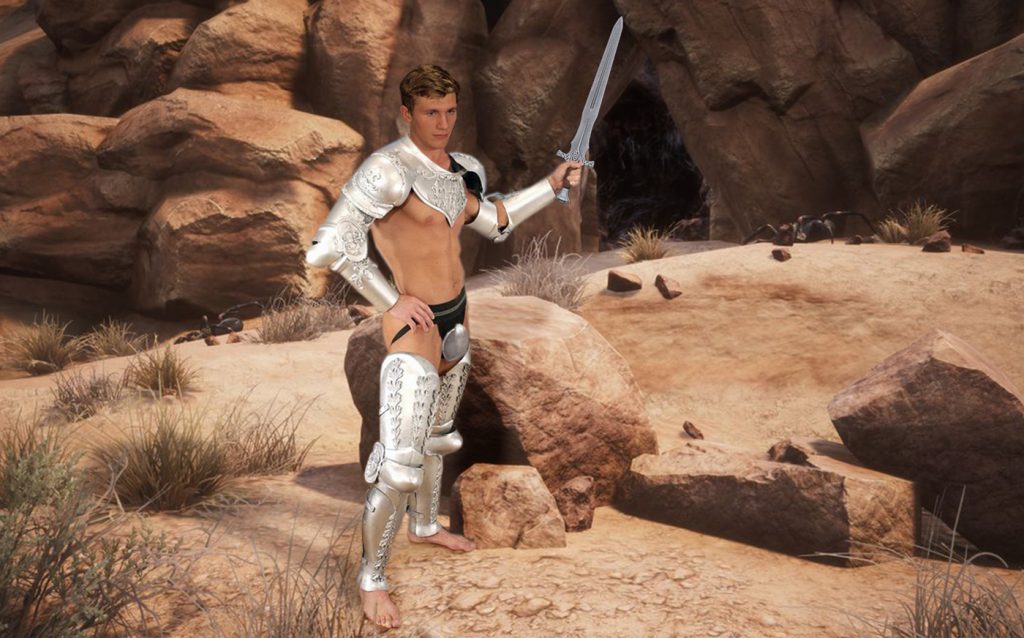 Part
one: Our Hero’s Buns get Toasted
In
a time long ago, and in a land far away, there lived a handsome young
Knight. Fair of face and blessed with a fit and lithe young body, he
was, at first sight, everything a romantic novelist, or a teller of
noble tails would dream of. However, he may have possessed physical
beauty, but that was were his fairy fairy tail qualities ended. In
addition to dashing good looks, a Romantic Hero must have other many
virtues, such as nobility, integrity, honour, chivalry and kindness,
in all these areas, the young Knight was sorely lacking.
In
his own mind however, he was near perfect, all that was needed he
believed, was for others to know it too.
Not
only was Crispin Cherrybutt the handsomest knight in the land, he was
determined to prove himself to be the bravest, and he would do so by
slaying the fearsome dragon which had been terrorising the local
countryside.
Many
brave nights had tried before him without success, but arrogant young
Crispin was convinced that he would be the one to succeed where
others had failed. It was with this pride and the conviction of his
own superiority, that he had set out on his quest.
It
had been a long journey to reach the Dragon’s layer, but it would be
worth it, as he stood outside the entrance to the cave where the
terrible creature had made its nest, he paused to contemplate the
tributes and honours he would receive when he returned with the
dragon’s head on the end of a pike. He was also sure he would
receive a fortune in gold from the king and, in addition he it would
be his right to deflower all the loveliest maidens in the kingdom.
Other
knights had travelled to this same destination seeking honour and
also to rid the land of a terrible menace. However, such altruistic
considerations did not occur to Chrispin, he thought only of the
wealth, acclaim and sexual pleasuring which success would bring him.
Yes,
he thought, he would be a hero when he returned with such a trophy.
Click on the READ MORE tab below to continue:
However,
the wily old dragon had other plans for the proud young Knight,
rather than returning as a triumphant hero, once the beast had
finished with him he would slink home as a defeated boy, with a very
sore bottom.
As
soon as young Chrispin set foot in the Dragon, cave, the bravado,
which had powered his quest deserted him, and was replaced by
nervousness and by his inflated sense of self preservation. He
attempted to steel his courage by thinking of the wealth slaying the
beast would bring him, and all the eager wenches who would surrender
their virtue to him. However, try as he might, those prospects no
longer seemed quite so attractive when they depended upon confronting
a dragon. 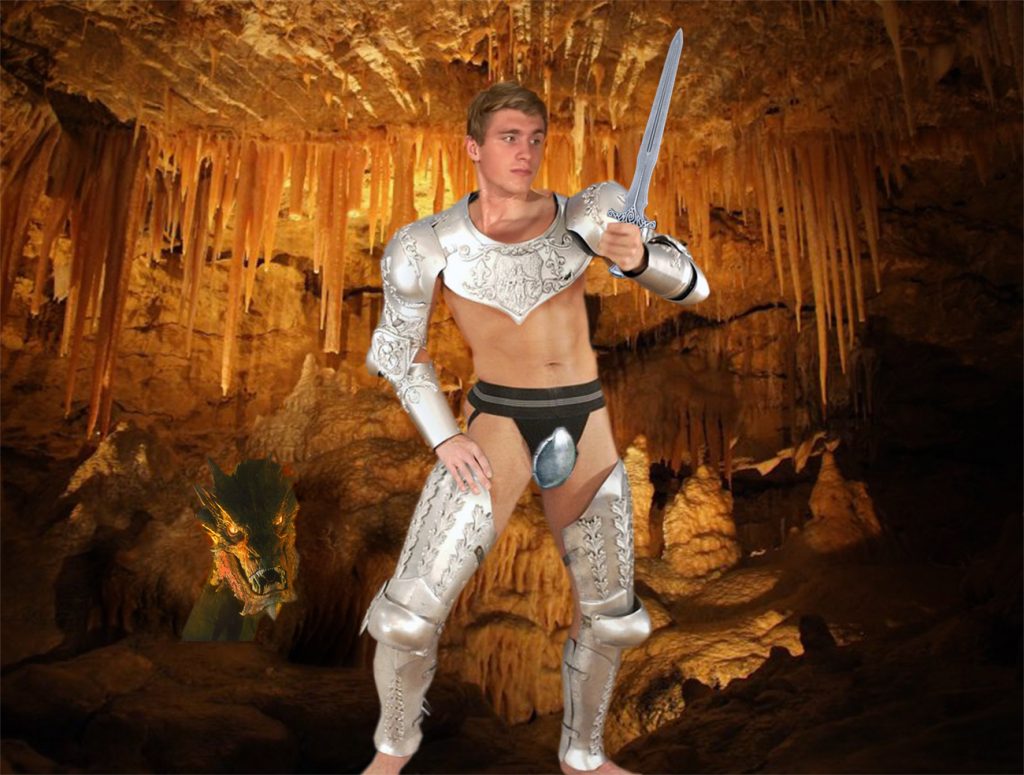 A
shiver ran down his spine as he recalled the tales he had heard of
dragons, who, it was said, not only ate young knights like him, but
cooked them alive first with their fiery breath. Beads of sweat
appeared on his forehead as he struggled to dismiss his fear. He
resolved that to explore just the first chamber of the cavern, and,
if he did not find the dragon there, he would leave and go home.
Crispin’s
nerves would be in an even worse state, and his decision to search
only the outer chamber appear even less shrewd, if he had looked
behind him-and seen the large scaly shape lurking in the shadows and
observing his every move.
The
elderly dragon had been aware of the handsome young knight’s arrival
since he had first ridden up to the entrance of the cave. He knew
what Crispin’s intentions were, as he was not the first to try,
however from long experience the dragon was adept at dispatching such
nuisances.
However,
the dragon was in an uncharacteristically amiable mood, he had
feasted well on a bullock he had taken from local farm, and did not
have any desire to eat man flesh at that time. However, he was
resolved to teach the young upstart a lesson he would not forget,
and, being a dragon, he was well equipped to do so!
Silently,
despite his size, the creature follwed the young knight as he
nervously ventured further into the cave, awaiting the opportune
moment to strike.
Moments
later, young Crispin Cherrybutt presented the waiting dragon with the
perfect opportunity, when he bent forward tp peer into one of the
smaller inner chambers of the cavern.
In
that far away land, following the examples set by those such as the
Greeks and the Spartans, the young warrior were all but naked beneath
their armour. 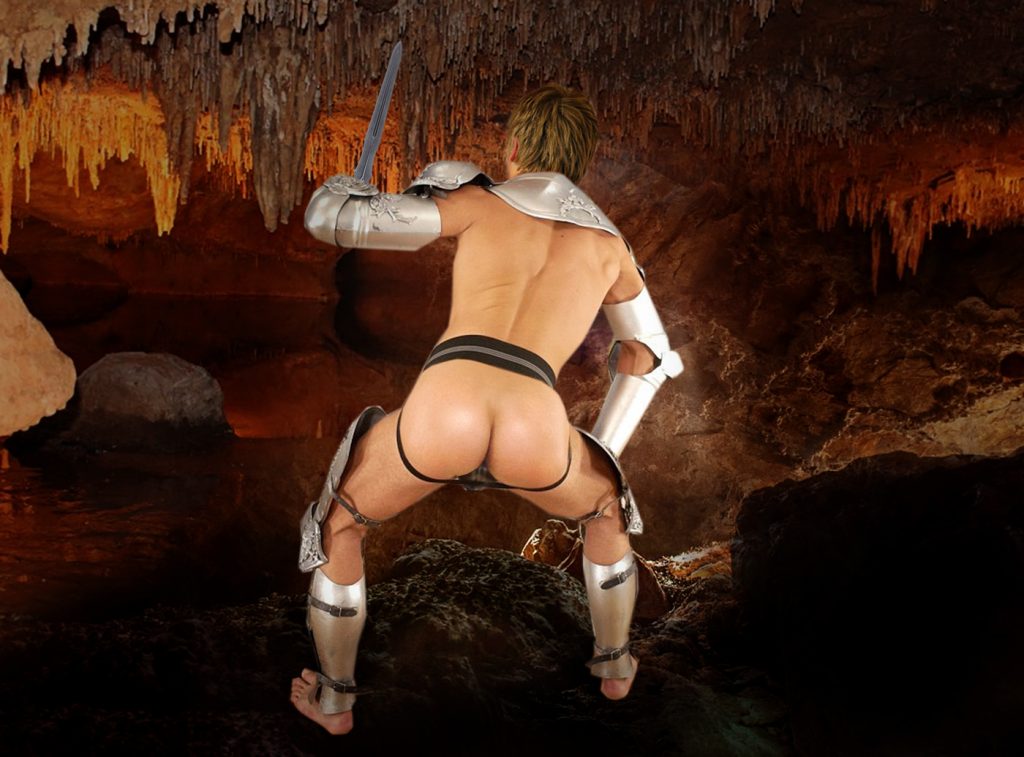 Thus it was that the sight of Chrispin’s perfect,
shapely and hairless bare bottom thrust towards him, like a cannibal
banquet, as he bent, was a dizzyingly tempting target which no self
respecting dragon could resist.
The
old dragon did not resist temptation for one moment, and ceasing the
opportunity to teach the impertinent intruder the lesson he so dearly
deserved, he breathed in, and the opening his vast jaws in a blood
curdling roar, exhaled a stream of flame aimed directly at the
exposed seat of the arrogant young nuisance in front of him. Striking
right on the tight divide in the middle, and spreading across each
bare cheek. 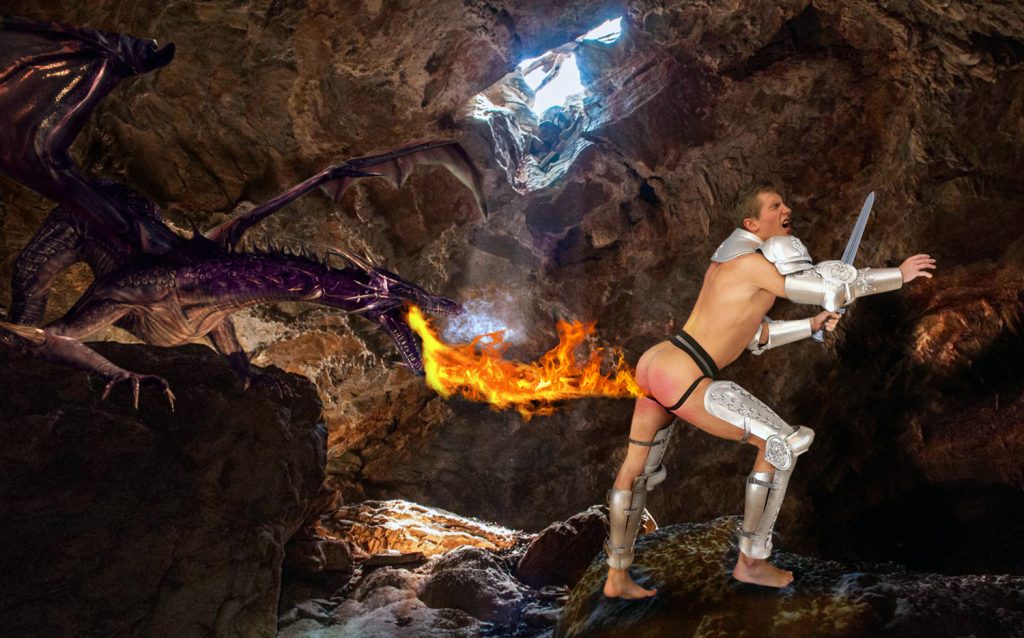 As
the flames hit his tender skin, Crispin let out an ear-splitting
shriek of agony, and leaped three feet into the aim clutching at his
toasted buns. The pain was like something he had never experience
before, and he instantly knew, without looking round what had caused
it.
He
spun round and saw what he had known would be there, and it was even
more fearsome than he could have imagined. The dragon stared back at
him, and its jaws twisted into what Crispin was convinced was a cruel
and sardonic grin of satisfaction.
Crispin
did not waste a moment, and with the terror enhancing his already
outstanding agility, he dodged past the dragon, and ran full pelt out
of the cave still clutching his dragon’s breath seared bottom.
The
dragon let out a second roar and shot out another fiery stream of
flame, which despite Crispin’s swift and greyhound attempt to avoid
it, succeeded in singeing Crispin’s fingers and the tops of the
insides of his thighs.
With
the speed of the athlete he was, Crispin ran out of the cave and over
to where he had tethered his steed.
The
dragon did not follow, he was too full of fattened bullock to run
after a healthy young buck, and anyway his intention had only been to
scare the impudent boy away, and leave hima token to remember him by.
Crispin
would certainly never forget the dragon and his well singed bottom
would keep the memory fresh for days to come. He had a two and a half
day ride home ahead on him, and he would feel every bump. 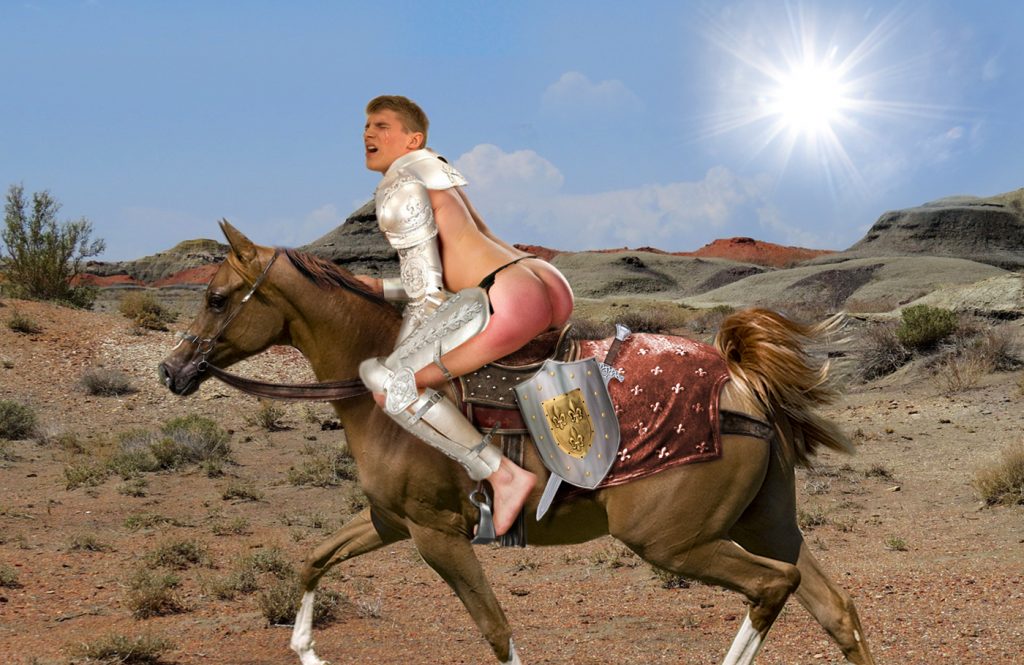 As
the tears of pain and humiliation rand down Crispin’s still
devastatingly handsome face and he strained every muscle in an
impossible attempt to keep his sore and well scorched bottom from
contacting with with the hard and sun heated saddle, he could not
have known that his painful adventures had only just begun.
_______________________

Notes:
i) Part one was inspired by regular reader Sammie.
ii)
This story is by way of an intermission, “The Shaman’s Revenge will
continue soon.
.

17 Replies to “The Singeing of Crispin Cherrybutt (Part One)”