Skip to content
Part
two: Crispin and the Kingdom of the Ants
Crispin
had managed to put as much distance as he could between himself and
the lair of that terrible fire breathing dragon which had so cruelly
flame toasted his handsome, but now very sore, young behind. However,
there was still a long way to go.
Even
by travelling day and night, there was a long arduous ride ahead for
Crispin to get back to his home town. Yet he was desperate to get
there as soon as possible, so that he could consult the apothecary,
in the hope that the wise old man could provide some cooling and
soothing cream or balm for his scorched bottom. His muscles were
tiring, and he was finding it increasingly difficult to to keep his
burning behind raised off the hard and sun ray heated leather saddle,
and he knew he could not manage to do so for much longer.
Frantic
to get home and to some relief, he angrily urged his horse to move
faster with a series of slaps, kicks and furious commands, yelled
directly into the poor beast’s ear.
They
now had to cross miles of open and parched desert, where the heat was
becoming unbearable and the heated saddle was now painful to touch
even without a singed bottom. Given the increasing discomfort,
Crispin was anxious to cross the desert and reach higher, cooler,
land as soon as possible.
“Faster,
you lazy brute!” he shouted kicking hard against the horse’s flank,
and slapping it hard on the neck “If you don’t more faster, I will
feed your carcass to the King’s hunting hounds when we get home!”
he cried.
The
young horse, had already developed a strong dislike for his cruel and
abusive young owner, long before they had embarked on the latest
journey, and it was becoming more and more irritated by the shouts
and blows which Crispin was inflicting upon it. The grumpy steed was
reluctant to move any faster in the exhausting heat, at least not
whilst carrying such an uncomfortable burden.
The
animal therefore concluded that the preferable solution would be to
eject the hated burden at the earliest opportunity. 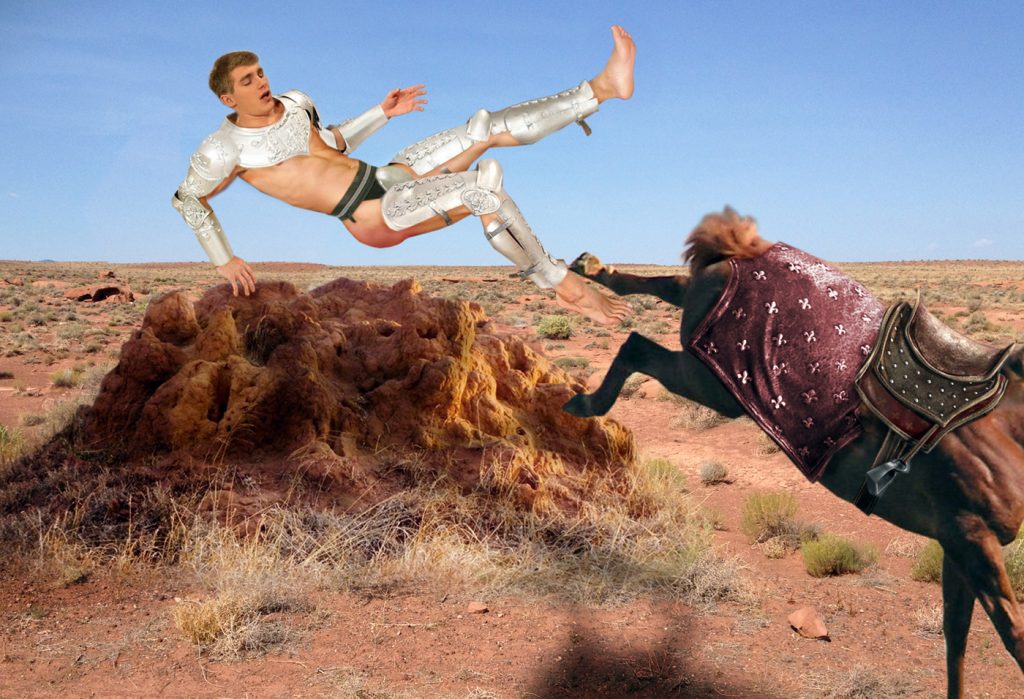 Crispin
was an experienced rider, but he was distracted by the burning pain
in his bottom, and was not expecting the hose to suddenly kick back
with its hind legs and violently buck it’s back, throwing it’s rider
up into the air, before galloping away, and leaving the young knight
plummeting, bottom first, towards the ground.

Click on the READ MORE tab below to continue:
As
luck would have it Crispin landed on a mound of earth which gave way
beneath his weight, cushioning his fall and causing his bottom to
slip into a dip beneath him. At first it seemed that he had
encountered his first bit of good luck that day as the crumbling
earth had softened what would otherwise have been a hard and painful
landing. 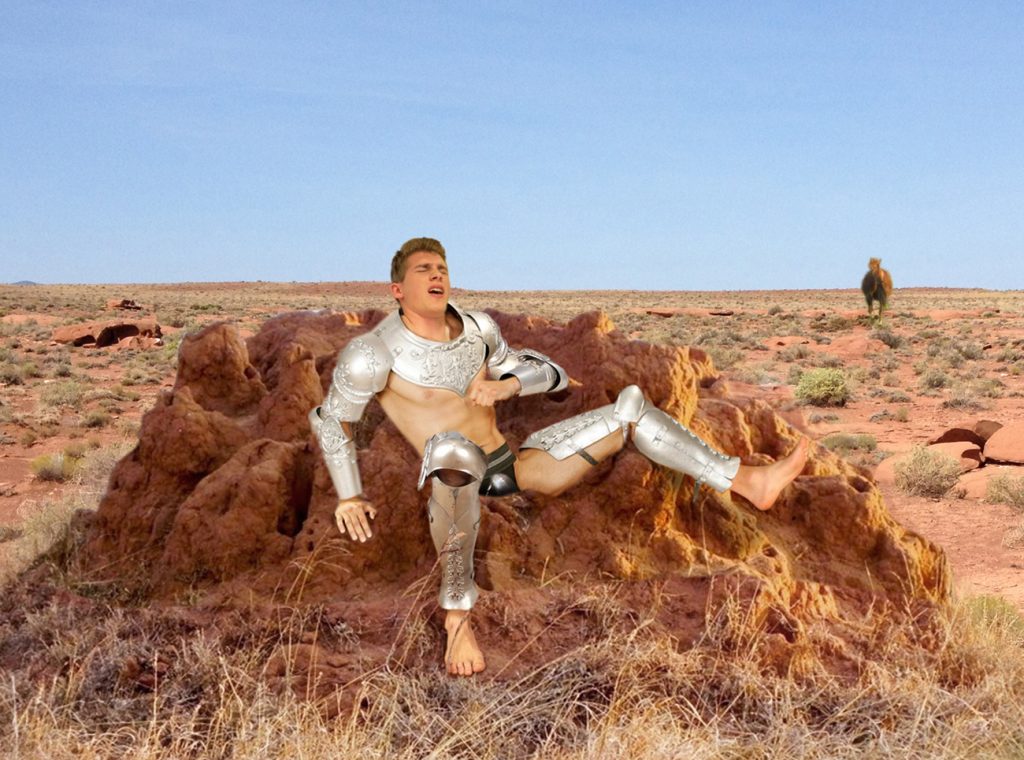 However,
then he realised that, rather than landing in a dip in the earth, his
bottom had actually broken through the roof of an ant dug chamber
beneath and he was effectively sitting in a hole in the earth. Then
it dawned on him what the structure he had landed in actually was.
To his horror he realised he had landed bare ass first into a fire
ant hill. The fire ants of that ancient land truly lived up to their
name, although tiny, their bite was ferocious and exuded a powerful
fire like venom causing a searing and throbbing pain which could last
for hours and sometimes, if you were really unlucky, for days.
Crispin
had been bitten by a fire ant once as a child, and he had no wish to
repeat the experience. He attempted to spring to his feet, but found
he could not, he was stuck with his bottom wedged into a tight hole
and thrust into an underground chamber of an ant hill. 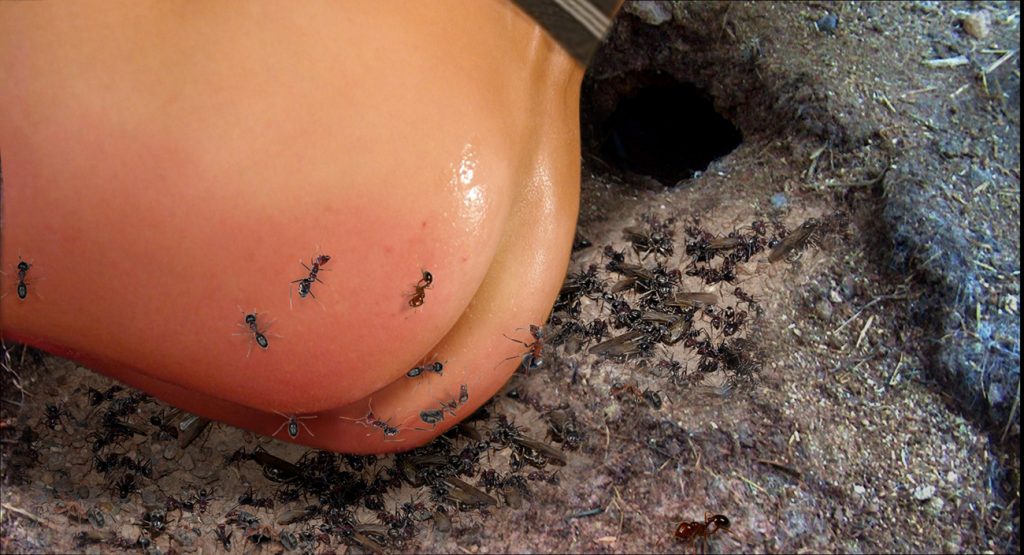 For
a moment he hoped that perhaps the ant hill had been abandoned and
that he was in fact stuck in an empty ant hill. However, that hope
was swiftly proved wishful thinking as he felt the fist tickling
sensation of tiny insect feet on his dragon toasted skin.
He
knew what was coming before it came, and in a frantic panic he
struggled to free himself, pushing against the crumbling earth and
kicking his legs in the air. However, this merely resulted in
wedging him even more tightly into the hole which his landing had
created. 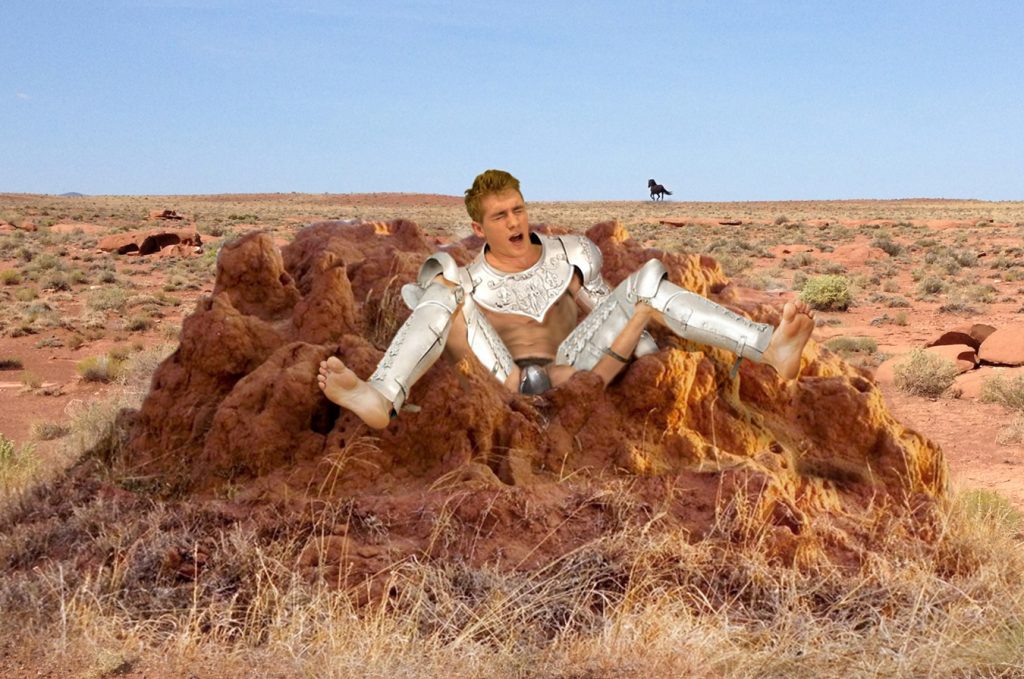 The
first ant bite was like a new sheet of flame burning his skin as if
the dragon was in the hole beneath him blowing its fiery breath
upwards at its chosen target. A second and third ant bit followed and
each had the same effect as the last one. Each fierce little insect
clamping its jaws into his his tender scorched skin and unleashing it
burning poison into the young knight’s already punished posterior.
Crispin’s
piercing screams of agony rang round the empty desert, but as his
mount had already vanished at full gallop over the horizon, their was
no sentient creature, save ants to hear them. 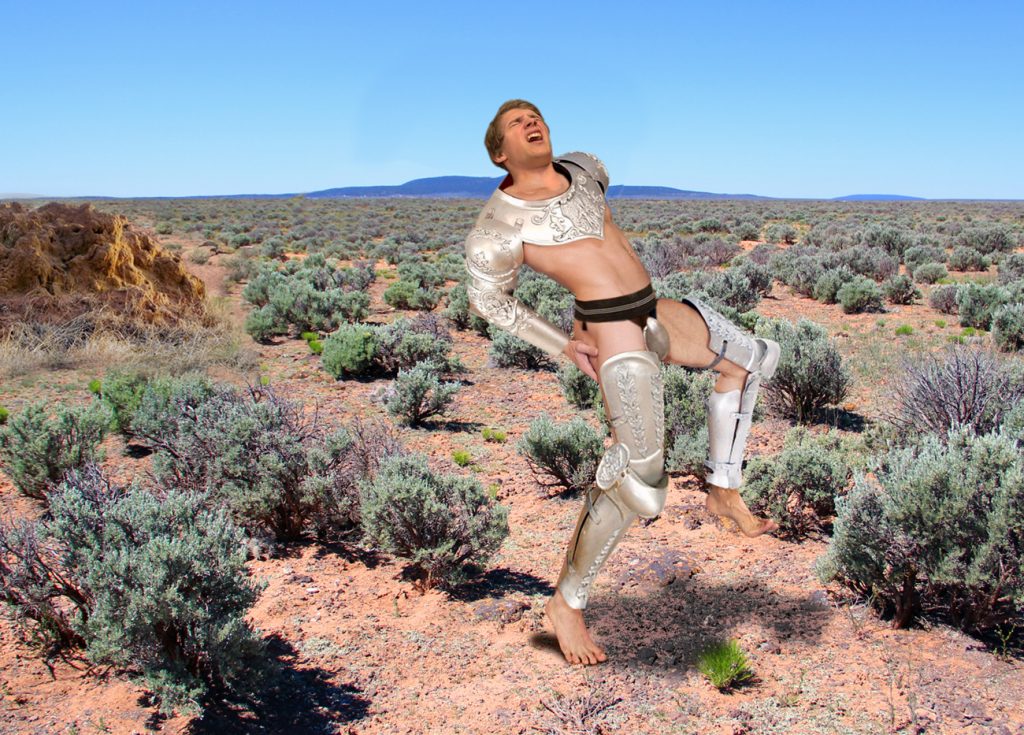 Finally,
after what seemed like an age, the brittle earth began to give way,
and by straining his every youthful muscle, was able to free himself.
He jumped up, and ran through the desert, the sun baked sand burning
the soles of his bare feet as he went. However, that pain was as
nothing next to the burning fire in his dragon scorched and ant
bitten bottom, which, for Chrispin was now at the very centre of a
world of pain.
The
fire in his rump had hardly eased at allwhen, many hours of painful
walking later, and as night began to fall, he reached the edge of the
desert.
He
trudge for another mile or so, and then realised he was totally lost,
unsure if he was even heading in the right direction. As the fear he
would never find his way home began to grip him, be became aware of a
light in the distance. 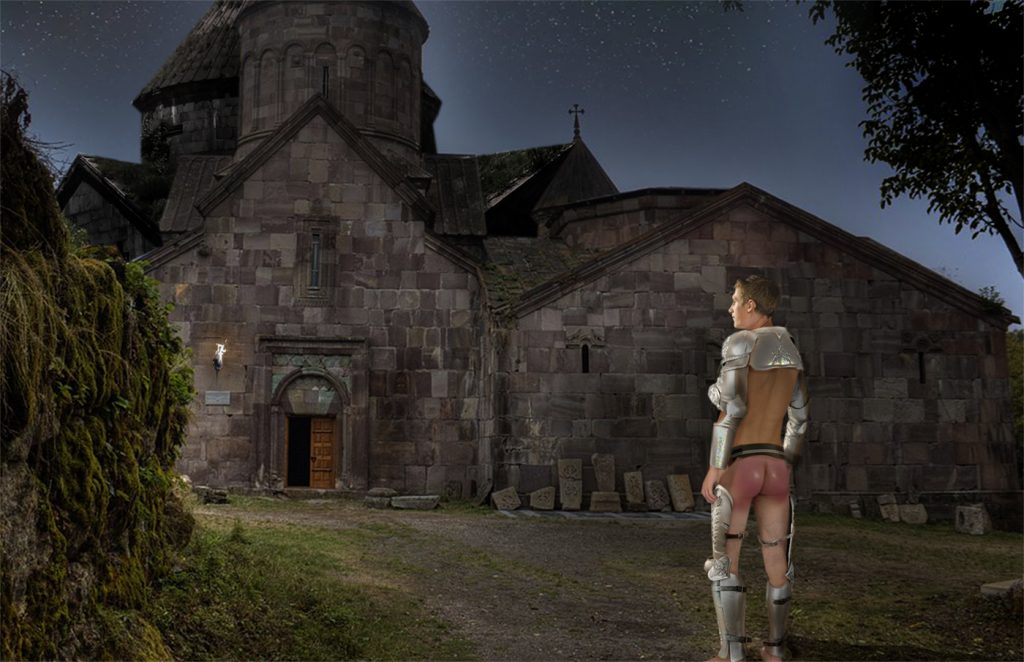 He walked towards that light, and as he
rounded a small hill he could see the silhouette of a large building,
standing out against the night sky. From the burning torch outside
the large wooden door, it was clear the building was occupied …
with humans. People who might be able to help him, people who may
have ointments, oils and balms which could extinguish the fire in his
behind.
As
he limped towards the building, his spirits began to lift in the hope
that he had found sanctuary and that his nightmare was finally over.
TO
BE CONTINUED

8 Replies to “The Singeing of Crispin Cherrybutt (Part Two)”