Skip to content
The
Singeing of Crispin Cherrybutt
(Part Four – pt 2)
Ignoring
the handsome older knight, Tybalt’s, anxious warnings Crispin had
continued to curse and threaten the monks, now, too late, he realised
what a mistake he had made. He had disregarded his new friends plea
for him to stop, and now he would pay a painful price.
A
group of the monks took hold of Crispin and unshackled him from the
alter, and then dragged him from the room, leaving a sad eyed Tybalt
still kneeling, strapped to the table, in a most undignified manner,
with the remnants of the fire root phallus still protruding from his
rear.
The
grinning monks, half dragged and half carried the struggling and
protesting Crispin down seemingly endless corridors, before they
reached an open courtyard at the back of the great building.
Having
become accustomed to the gloom inside the monastery, Crispin blinked
in the sunlight as he took in his new surroundings. In the middle of
the courtyard were a number of dome like objects, made from platted
wicker. Crispin did not recognise the structures, but as he was
dragged closer to them he could hear the buzzing of bees. Earlier he
had not understood Tybalt’s warning “They will take you to the
hives!” but now his fellow captives words echoed ominously in his
head.
The
monks then roughly held him down as they tied ropes around his legs,
just below his knees, and then attached them tightly to his wrists.
When
he was fully secured they began tugging on the ropes, which were
looped over a large wooden pole protruding from the side of the
building, and quickly hoisted Crispin up with his legs in the air,
with his lower body and bottom dangling below, now mere inckes from
the wicker hives.
Then
the older Monk began to chant in a high, almost “sing-song”
voice, while another monk handed him a colourful glazed ceramic jug.
The first monk then produced a small wooden batten from his cassock,
and began stirring the contents of the jug. When he took it out it
was coated with golden honey. 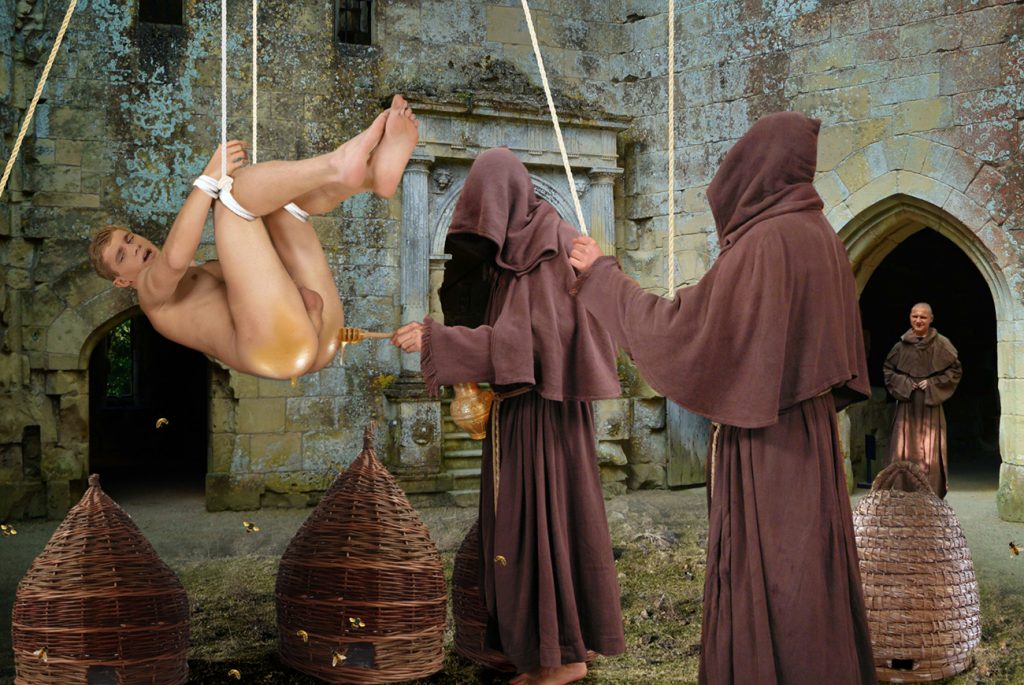 He
then used the wooden batten to smear the honey all the cheeks of
Crispin’s bottom until it glistened gold in the sunlight.
Crispn
was outraged, yet confused at this latest humiliation, why on Earth
would they cover his backside with fresh honey?!! Whatever their
plan, he knew he would not enjoy it.
“Ha!
Sir Knight!” chuckled the Monk “Now you have a golden arse!!”
his comment eliciting cruel laughter from the other monks “Shall we
see what out little friends think of it?” he asked before taking
hold of a paddle which one of the younger monks had brought with
them, and proceeded to hit the sides of the hives.
Instantly
a large swarm of angrily buzzing bees cam streaming out of the tiny
entrance, like a furious black cloud. 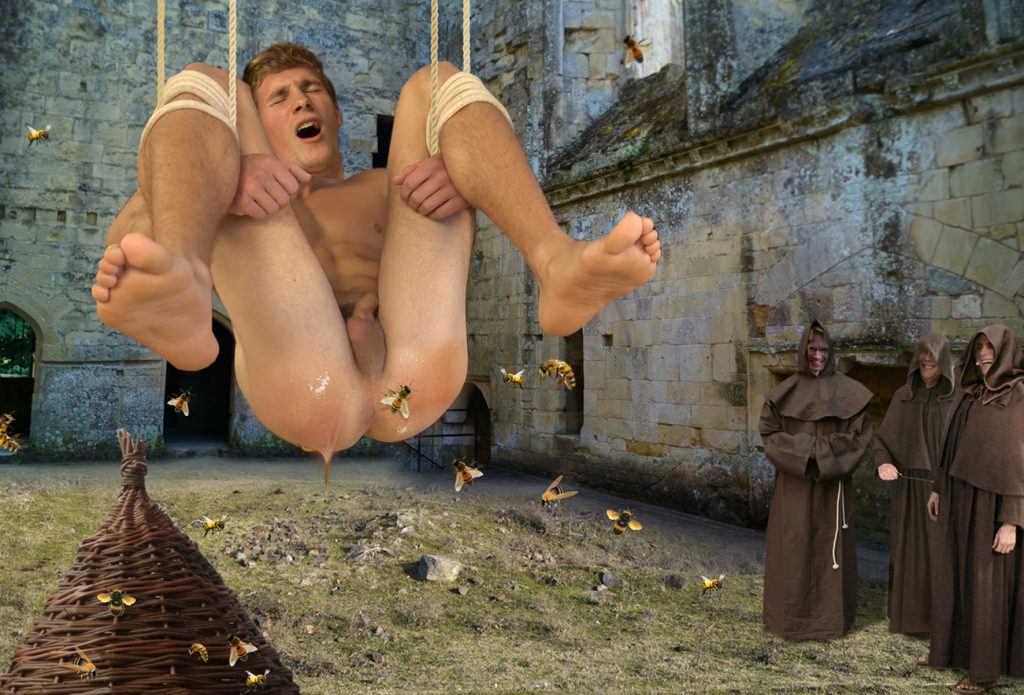 The
monks retreated to a safe distance to watch the entertainment, as the
bees become immediately attracted by the sweet honey and began
swarming round Crispin’s dangling bottom.
To
his increasing horror, Crispin now realised the purpose of the honey
“NO PLEASE!!” he cried “UNTIE ME … PLEASE!!!”
The
sadistic monks just laughed and clapped their hands with delight.
The monks were enjoying the spectacle, and as Tybalt was still
shackled to the central altar with a fire root dildo up his bum,
nobody was going to come to Crispin’s aid.
Crispin
cried out in terror as the first bee landed on his his honey coated
rump, at fist of just crawled over the surface feeding on the honey,
but then, alarmed by Crispin’s horrified shiver reacted by
instinctively stinging Crispin’s already highly sensitive butt cheek
.
Seconds
later a second bee landed, and then a third, and a fourth. Each
arrival followed the same pattern, with Crispin receiving repeated
painful stings in what had become the most tender part of his body.
“Our
little friends will teach you a lesson in respect young gallant!”
called the older monk, as the others cheered their approval.
Realising
that sudden movements were disturbing the bees and making them sting
him, Crispin tried with all his resolve to stay still, but it proved
impossible. His instinctive repulsion at having insects crawling on
him combined with the fact that he was dangling uncomfortably in the
air, caused him to shake and tremble involuntarily, and each quiver
was greeted with a sharp sting from a startled bee.
Over
the following hours Crispin would be sting a hundred and more times
by visiting bees, attracted by the sweet and glistening honey.
Meanwhile the monks eventually returned to their ungodly devotions,
leaving Crispin dangling above the hives, and surrounded by buzzing
bees. 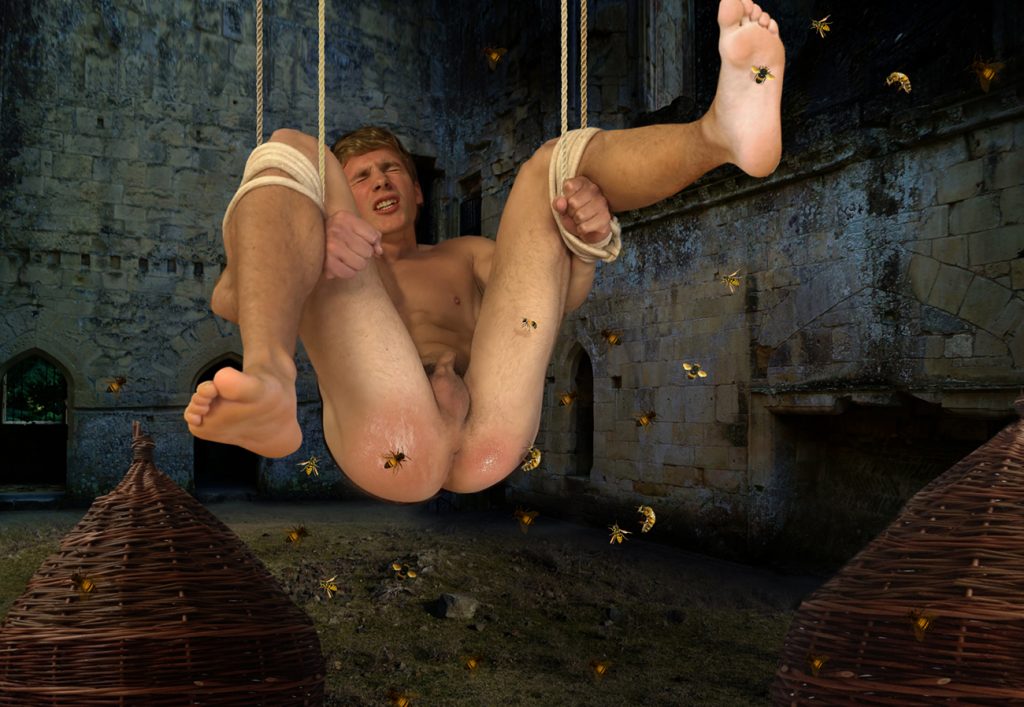 Later,
as night fell, there was no respite for the unlucky young knight,
for, although many bees returned to their hives as the daylight
faded, they were replaced by other stinging insects which were
similarly attracted by the remaining honey still covering Crispin’s
cute, but very sore bottom.
As
Crispin hung there through the long and uncomfortable Knight, he
wondered with dread what other catastrophes and humiliations lay
ahead on his ill starred adventure! 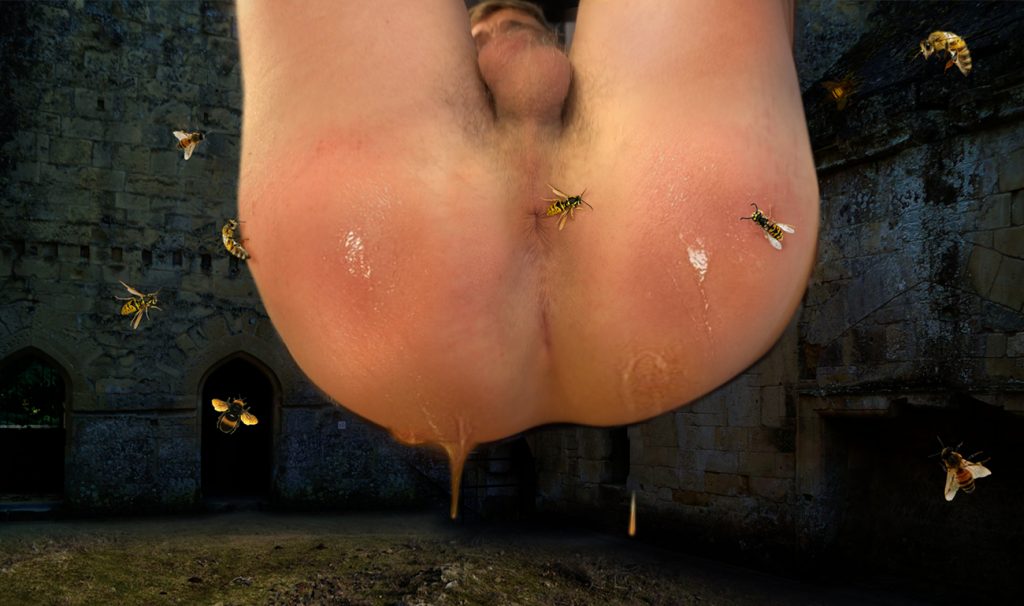 Note: Sorry for repeating a
punishment previously inflicted on Boy in the Sting of the Jungle,
but it was requested, and I felt that Crispin deserved it!!
.