Skip to content
The
Shaman’s Revenge Part 12
Jordan’s
Wilderness Adventures (Prologue)
Briefly
leaving Crispin Cherrybutt to his Medieval mishaps at the hands of
the demonic monks, we now travel back to the present day and to
Jordan Draper’s Southern US home town where Jordan had just taken a
shower after a working out, and he was lying naked on the bed lithe
and perfectly formed young athlete’s body still damp and glistening.
He was sulking.
Even
though, for the first time in weeks, his bottom had stopped stinging,
he was in little doubt that this happy situation would not continue
for long. Ever since the damn incident with Martin Clifford and his
fairy boyfriend, and more especially since the damn ranger’s arrival
in town, spanking seemed to be the go to option for every adult male
Jordan encountered.
To
make matters worse, he appeared to be going through a very accident
prone phase, resulting in a series of mishaps all of which seemed
to, very literally, leave him with a pain in the backside.
His
Father was away on a business trip, but he was due back the following
day, and Jordan had little doubt the moment he accidentally infringed
some forgotten rule, he would be back over the paternal knee getting
his bare butt toasted! This should not be happening to a guy who was
due to turn 19 in just two months, and he was very tempted to leave
home, except that he would lose his allowance, not to mention his
credit card.
His
handsome good looks notwithstanding, it would not be so easy to pick
up chicks without a credit card.
One
bonus was that he no longer had to visit the Doctor for for those
god-damn injections in the butt. He had no idea what the doctor put
in his fucking needles, but his ass always hurt more after a visit to
the clinic.
It
was also weeks since he had been laid, and the lack of sex was deeply
frustrating and left him with an ache in the balls, which Jacking off
did not relieve.
As
he was gloomily contemplating his misfortune , the phone beside his
bed began to ring, guessing the call would be from his Dad,
announcing his imminent return he picked up the receiver and glumly
grunted “Yeah?”
“Hello
handsome, is that you?” 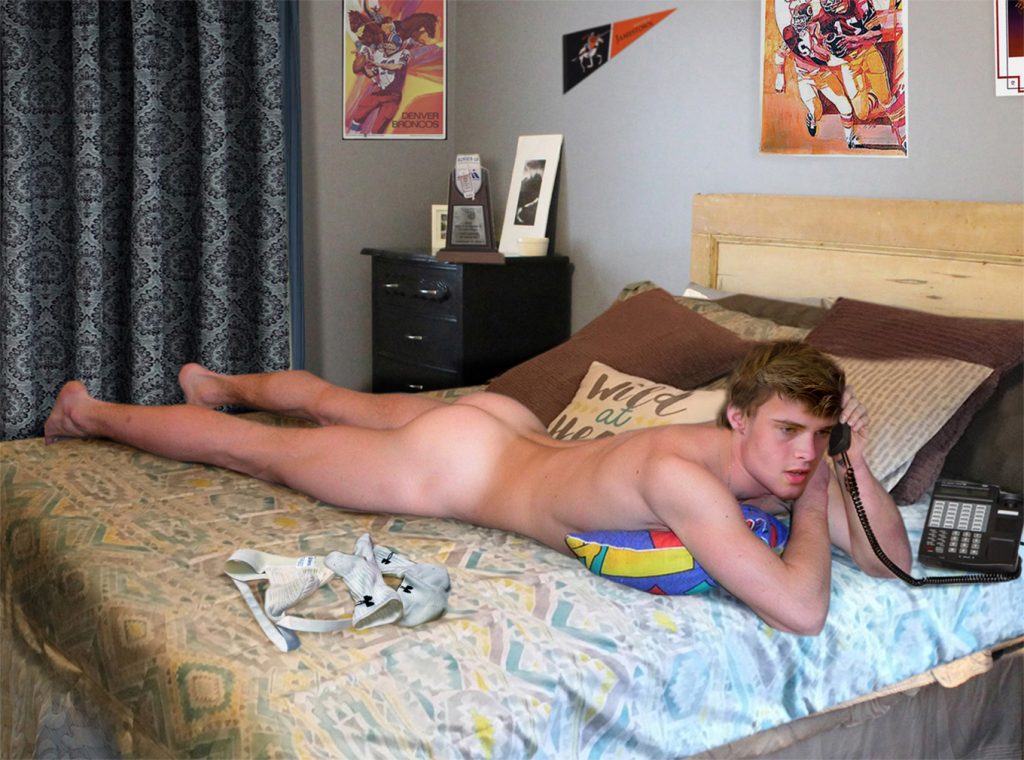 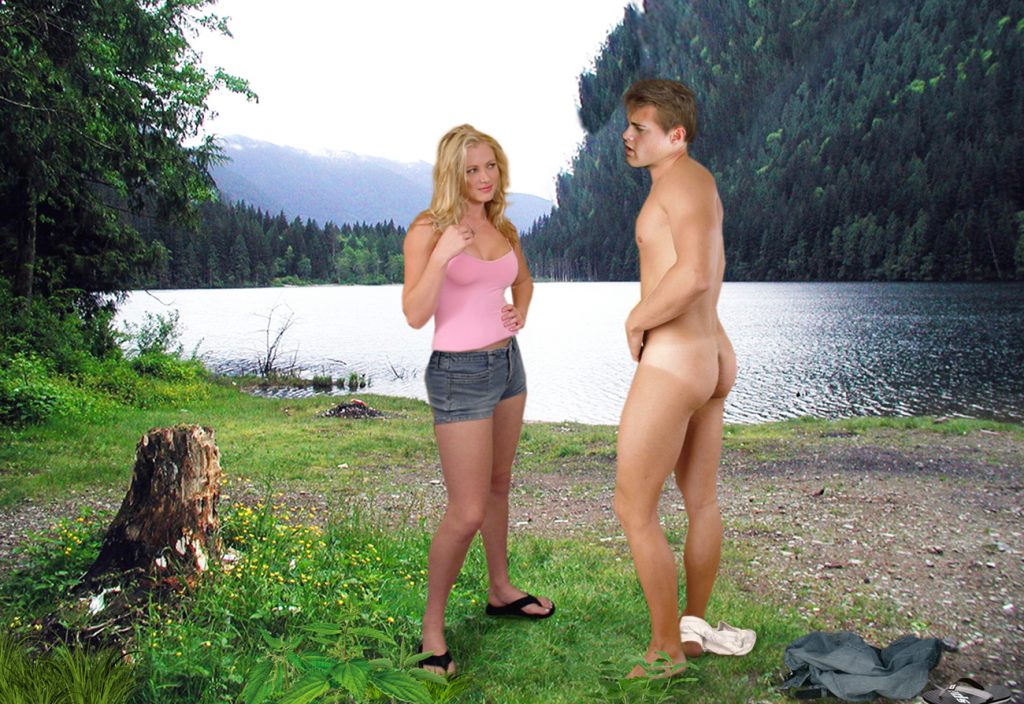 “OF
course I am not fooling with you Jordan, I promise you will get what
you have been asking for!” she grinned, letting her eyes travel
slowly up and down his naked body “Ohhhh!” she simpered “you’re
so handsome … and such a big boy …” she said looking down at
his still partially erect penis “that huge thing of yours is going
make little old me me a really scream!!”
Nobody
had ever told Jordan he had a large dick before, and the compliment
made him glow with smug delight.
“Why
not impress me even more with one of your incredible dives Big Boy!”
said Cindy Mae with a sweet smile “The lake is deep at this point,
so you could safely dive off that high part of the bank over there!”
she giggled again “It would be so hot to watch you! .. that would
sure get me in the mood”
As
a typical jock, Jordan loved showing off his sporting prowess,
especially to such an appreciative audience as hot chick Cindy. So he
did not need asking a second time, and sprinted naked up the bank to
the high point she had indicated. Now totally nude he stood on the
top of the bank and looked back at Cindy Mae, who waved to him
encouragingly “Oh my word!” she cried excitedly “Your butt
looks so hot like that! Now I remember why I call you Sweet Cheeks!” 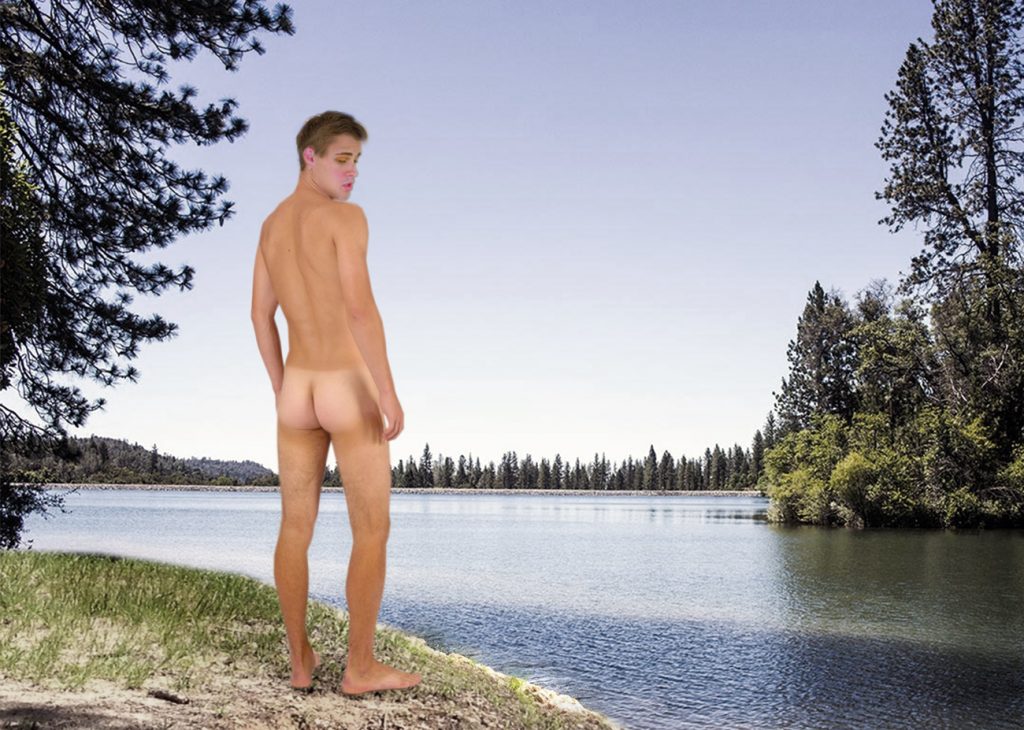 Suddenly
Jordan’s cute bare bottom, was again the subject of attention, and
that made him feel uncomfortable, especially after recent events.
Although, it was hot for a chick to admire his dick, it seemed weird
to have a woman objectify his bare butt. He quickly attempted to
change the subject.
“Now
watch this Sugar Babe! … prepare to be amazed!” he shouted back
to her, as her stepped forward, held his arms in the air, and stood
on tiptoe before launching himself into the air.
Jordan
performed a perfect dive, throwing himself forward in a smooth,
curved, motion out into the deeper water, which he entered with
hardly a splash or ripple, and dived deep in the dark cool water,
committing a series of underwater somersaults as he did so. For the
first time in weeks he felt like his old confident self, refreshed
and invigorated, he was dong what he did best and was able to show
off. On top of that, he was about to get all the pussy he could want
from the hottest piece of ass in the county … and maybe some ass
too!.
His
underwater gymnastics complete he surfaced like a beautiful sea otter
coming up for air, and turned his head towards the bank expecting to
see a highly impressed (and, with any luck aroused) Cindy Mae
standing there applauding him. However, to his surprise she was not
where she had been standing. He glanced around and caught sight of
her running up the beach in the direction of her car, carrying his
clothes which she had apparently scooped up.
What
on earth was she doing, where was she taking his clothes? and why was
she not watching his brilliant dive?
Confused
and increasingly angry Jordan waded ashore and ran after the fleeing
girl. However, Cindy Mae had a good head start, and by the time a
wet and naked Jordan reached the car, both she and his clothes were
inside, and she had locked the doors.
Cindy
Mae then wound down the window just enough to give her a small gap to
shout through. “You really are a dumb jerk Jordan Draper” she
snarled, her voice dripping with mocking contempt “Did you really
think I would let you near me after the way you treated me?” she
laughed, her usually pretty face now ugly and contorted with malice
“Then you are even stupider than I thought! I would rather gargle
with gasoline than put my mouth anywhere near your tiny dick!!” she
curled her lips into a sneer “And as for anal …. Ha! …. Well
now it’s your ass that’s on the line!”
“Come
on Sugar, don’t play games … be reasonable!” wailed a now very
unhappy Jordan
“I
ain’t playing games Dick for Brains!” replied Cindy Mae with a
smirk! “Enjoy the walk home, it’s only 72 miles!” She grinned
“And I suggest you stay away from the woods, you’ve seen
“Deliverance” haven’t you Handsome ? And you would make a real
cute squealing piggy for a Hill-billy mountain man to play with !”
“Fuck
you bitch!” yelled a now very angry and slightly frightened Jordan,
banging his fist on the roof of the car “Let me in or I will break
your fucking neck!”
“No
chance Looser!” replied Cindy Mae “You are walking home bare
assed! It’s less than you deserve, but Hey, I’m a nice person!” her
voice turned serious “And you better not come near me, I spoke to
the ranger guy who lives across the street from you, told him how
violent you are! He said, if you lay a finger on me, he’ll make sure
you don’t sit down for a month!”
Jordan
was stunned, he should have known the Ranger was behind this. 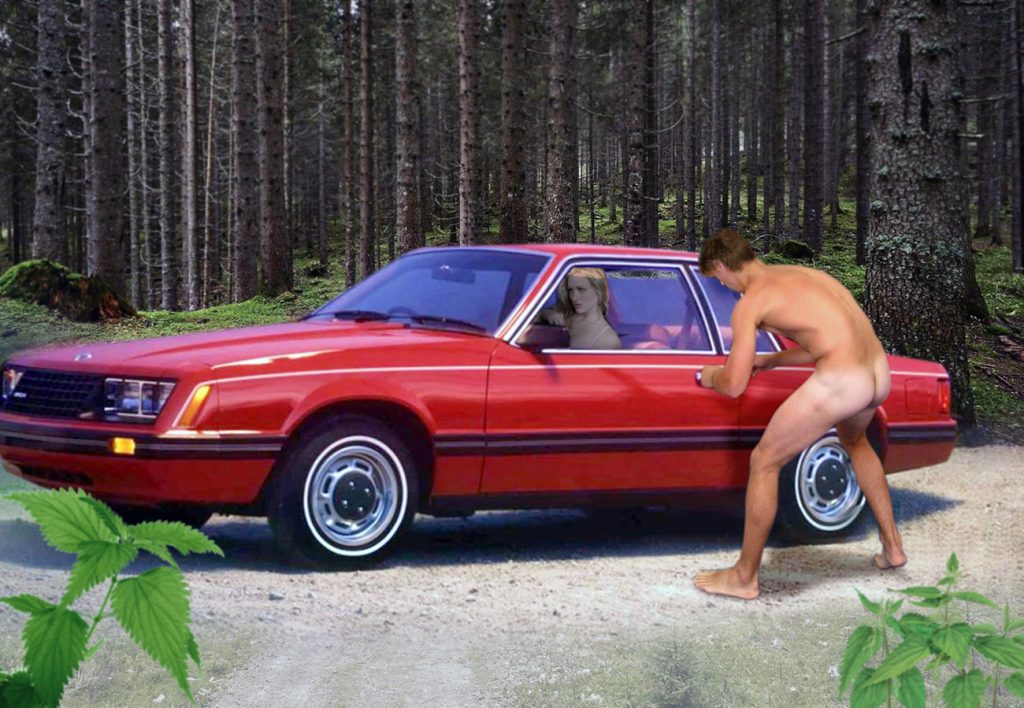 Before
he could reply, Cindy Mae turned on the car ignition, and after
blowing him a final sarcastic air kiss. Jordan frantically grabbed
hold of the door handle in a desperate to open the door, but to no
avail. The hottest pussy in town put her foot on the gas, and drove
off speedily down the lane, leaving a horrified, humiliated and
sexually frustrated Jordan staring after her. 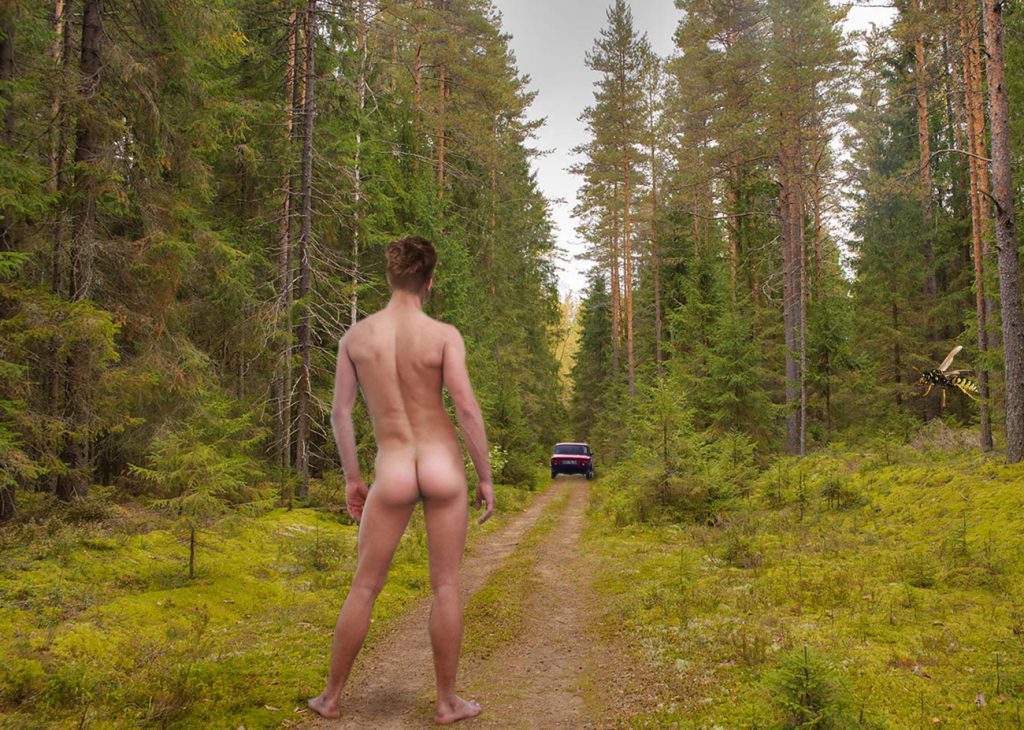 As
Jordan watched the car disappear into the distance the fully enormity
of his predicament began to dawn on him. He was alone, naked and
there was 72 miles of wilderness between him and his home. 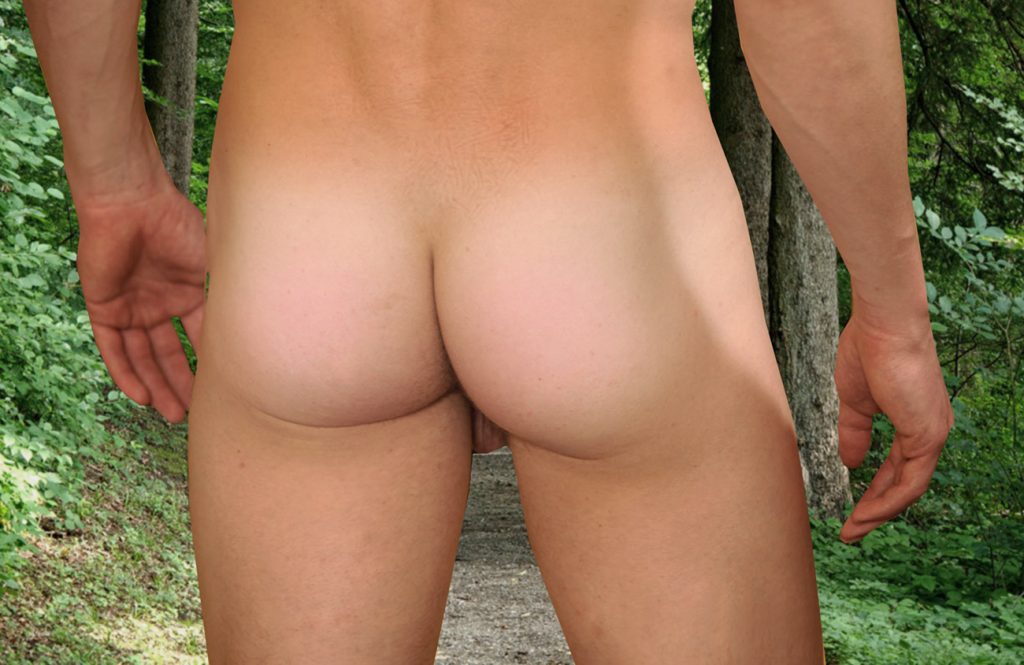 Jordan’s
Wilderness adventures had just begun, and by the time he got home,
one especially tender part of his anatomy would be very sore indeed. Which was only what he deserved.
The
Shamen’s curse continued to ensure that Jordan got exactly what he
deserved, and he would get it where it would do the most good.