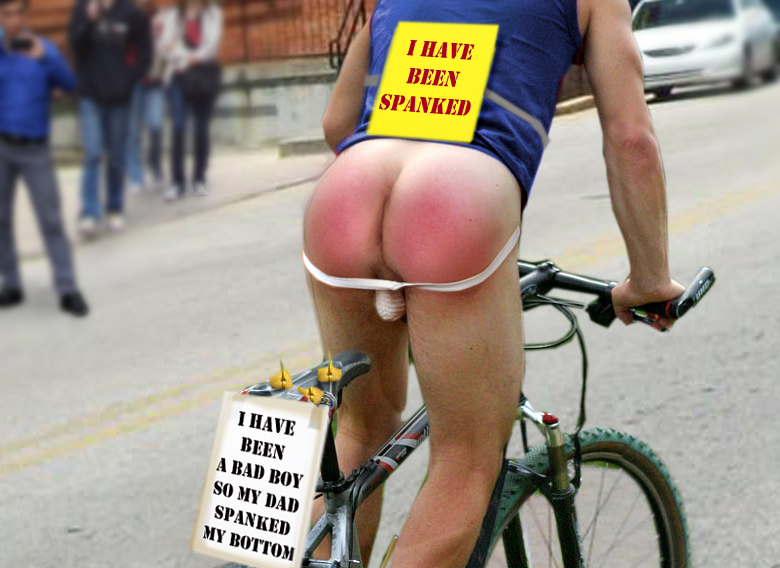 The
pain from the wasp stings may have faded into a painful and
embarrassing memory, but Darrell Todd’s punishment was not over.
Deciding
that Darrell needed to be taught a proper lesson. Sam Burgess had
taken it upon himself to phone Darrell’s father and tell him all
about his 19 year old son’s attempt to spy into the girl’s showers.
Marshall
Todd, was deeply shocked, shamed, appalled and infuriated in equal
measure to hear what his son had been up to. Punishment was
required, and that punishment should be severe and memorable
A
devout member of his local church, Marshall had never chastised his
children physically, however, after speaking with the new pastor he
had undergone a significant change in views “Thou shalt
beat him with the rod, and shalt deliver his soul from hell!”
he muttered, angrily quoting from Proverbs, as the Pastor had done
“For what son is not disciplined by his father?”

The
gentle approach had clearly failed with Darrell, and, 19 or not, it
was time his son experienced the discipline he had been missing.
Darrell
guessed something was wrong when he saw his Dad’s face as he picked
him up from the bus stop, and drove him home in total silence.
However, when he was ordered to bed and told he would be dealt with
in the morning, he knew he was in serious trouble.
The
next morning Darrell awoke, took a shower and headed downstairs for
breakfast, only to find his father waiting for him at the foot of the
stairs. Marshall ordered his sun into the study and told him to drop
his shorts “You will not need them for a while!” he said before
pulling the protesting Darrell over his knee.
“I
know all about what you did at camp!” shouted the angry man.
“Dad!
You can’t do this to me, I am 19!” cried Darrell
“I
am going to do a lot worse to you!” Marshall snapped before
proceeding to give his unlucky son a long hard OTK spanking.
This
was, if anything almost as embarrassing to Darrell as what had
happened at Camp, being spanked bare bottom, over his father’s knee
like some little kid, was totally humiliating for him. To make
matters worse, he realised that his Dad had left the study door open,
and his younger brother, Tyler, was watching his punishment with a
broad, ear to ear, grin on his face.
However,
this was only the beginning of Darrell’s punishment. His Dad had
decided that to reinforce the message, his son should be shamed and
humiliated.
He
continued spanking his son until his bottom was bright red, and would
remain so for some hours, and then pushed him off his knee. He stood
up, picked up a jockstrap which was on the table and tossed it to
Darrell “Put that on!” he demanded.
Darrell
was confused, but did as he was told, he then reached for his shorts.
“No!”
Snapped Marshall, “You will not need those, leave them there and
come with me!”
Darrell
reluctantly followed his father as he led him out into the garden.
“Dad, people will see me!!” he whispered.
“That
is the idea!” Marshall replied. “Now I want you to get on that!”
he pointed to Darrell’s old bike. Darrell immediately noticed that a
sign had been taped to the back of the saddle, and, as he approached
it, he realised, to his dismay that it carried the statement:
I
HAVE BEEN A BAD BOY SO MY DAD HAS SPANKED MY BOTTOM
stencilled
onto it.
“W…hat’s
that for Dad?” stammered Darrell
“You
are going to ride round town, so that everyone can see that you have
received the punishment you deserve!” replied Mr Todd coldly …
“And to make sure nobody misses the fact you will wear this ….”
He
picked a large yellow card with the statement:
I
HAVE BEEN SPANKED
stencilled
onto it. The card was attached to a length of white cord, which
Marshall proceed to tie round Darrell’s middle, so the card sat
squarely on his back.
“This
is so humiliating!” wailed Darrell painfully aware that his younger
brother had followed them into the garden to watch.
“Humiliation
is exactly what you need!” replied Marshall, “I intend to punish
you in a manner you will not forget in a hurry! You will ride your
bike all around town six times, so that all of our neighbours can see
that you have been punished!”
“…but
… but!!” spluttered Darrell “That means they will all know that
I still get spanked …. I’m 19!!”
“That
is why you need a more severe punishment …. NOW GET ON THAT BIKE!”
Darrell
Reluctantly began to mount the bike, but then noticed that there were
three thumb tacks glued to the seat “I can’t sit on those!!” he
wailed
“They
are there to ensure that you keep your bottom raised, so that
everyone can see it!” replied his father “and see how red and
sore it is!”
“I
won’t do it!” protested Darrell 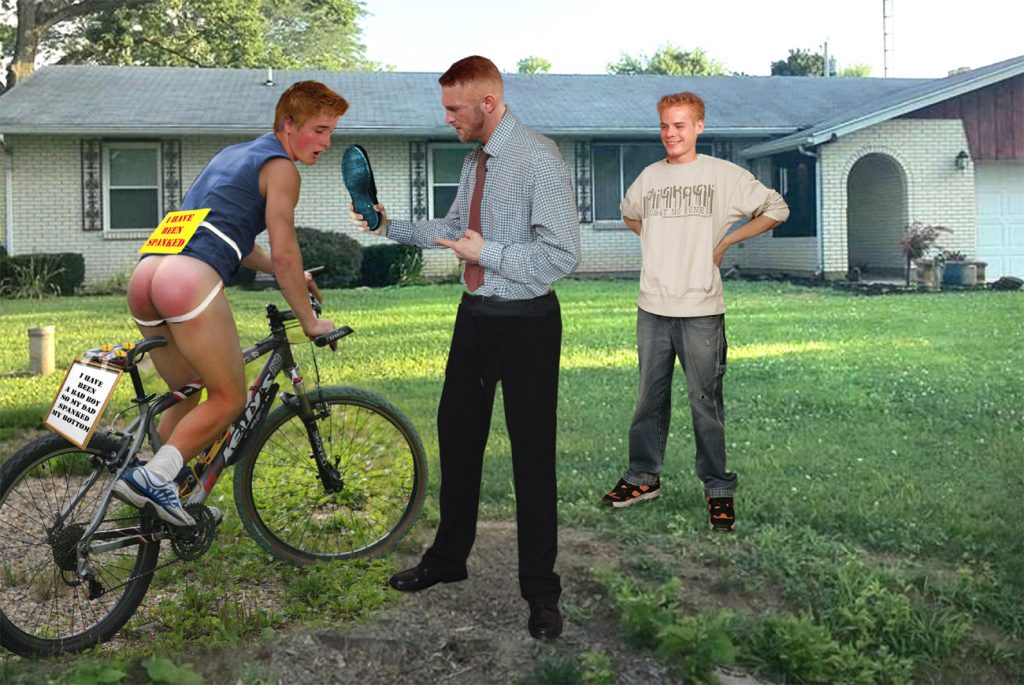 “Oh
yes you will” replied Marshall ”and I will be following in the
truck with your Grandpa’s size 14 slipper, and, if I see you trying
to hide yourself or take a detour, I will use it on you in the
street!!” he waved the large and scary looking slipper in front of
Darrell, who was sure it would sting like hell, and had no wish to
experience it.
“I
will then tie you over the hood of the truck and drive you round town
that way! So you decide!!”
With
a sinking heart, but knowing he had no option, Darrell climbed onto
his bike taking care to avoid the sharp points of the thumb tacks
glued to the saddle, and pointing unnervingly in the direction of his
bare, jockstrap framed, bottom.
Followed
by his Dad’s truck, Darrell slowly rode his bike down the drive and
into the main road. He had never felt so embarrassed and so exposed
in his life, it was only fear of what his father might do if he
didn’t obey which forced him on.
The
Todds’ house was just over half a mile from town and the road was
empty, so the first part of Darrell’s ordeal passed unobserved other
than by his father and Tyler, who accompanied Marshall Todd in the
truck. However, with mounting dread Darrell knew his relative
privacy would be short lived, …. and he was right!
On
reaching the town, the miserable 19 year old’s worst fears came true.
The streets were crowded with people, including many of Darrels
buddies and previous classmates. In panic he briefly thought of
turning round and making his escape, but then he remembered the
oversized slipper sitting on the dashboard of his father’s truck, and
realised there was no escape.
At
first nobody took any notice of the boy on the bike, but then one of
the football team read the notice on Darrel’s back then spotted
Darrell’s bare and still very red bottom and let out a “Whoop” of
glee, alerting others that there was something to see. 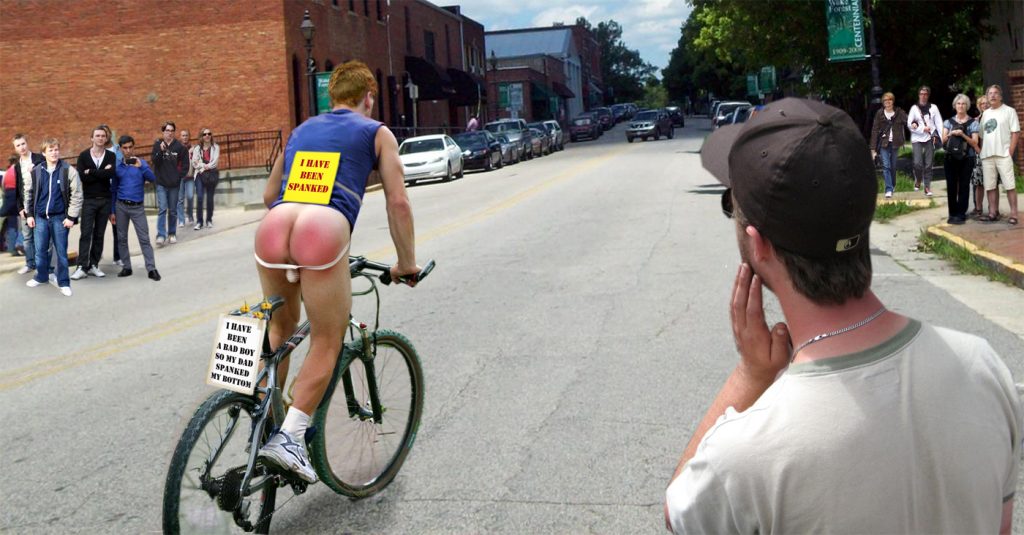 Then
the shouts, whistles and catcalls began, as passers by stopped to
stare point and take photographs of the disgraced Darren, riding his
bike down the street, his bare and spanked bottom raised and fully
displayed for all to enjoy.
This
would continue for the next two hours, as Darrell rode back and forth
through the town, knowing that his humiliation would be remembered
and laughed about by everyone who saw it, for years to come. 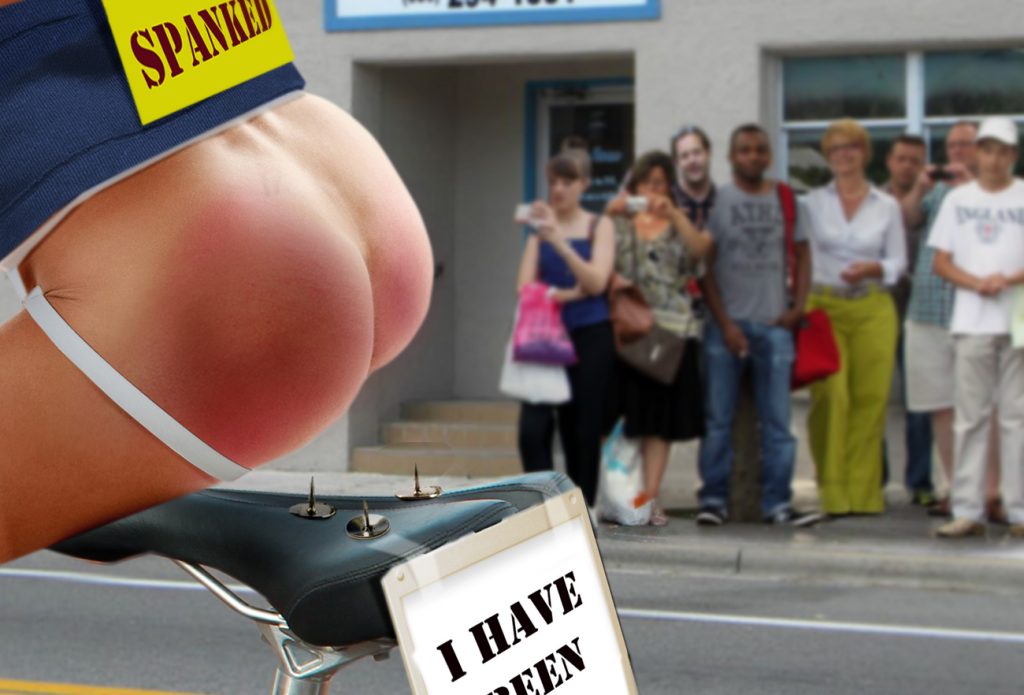 From
time to time his legs grew tired and his bottom began lowering
towards the saddle, only to spring back up again as the sharp tips of
the thumb tacks pricked his skin.
Was
this an appropriate punishment for what he had done? who can say, but
he certainly never tried peeping into the girls’ showers again!!
What better way to add to the humiliation of the boy you have just spanked than to confiscate his pants, so that his sore bare bottom is exposed to any and every casual stranger and passer by?!! 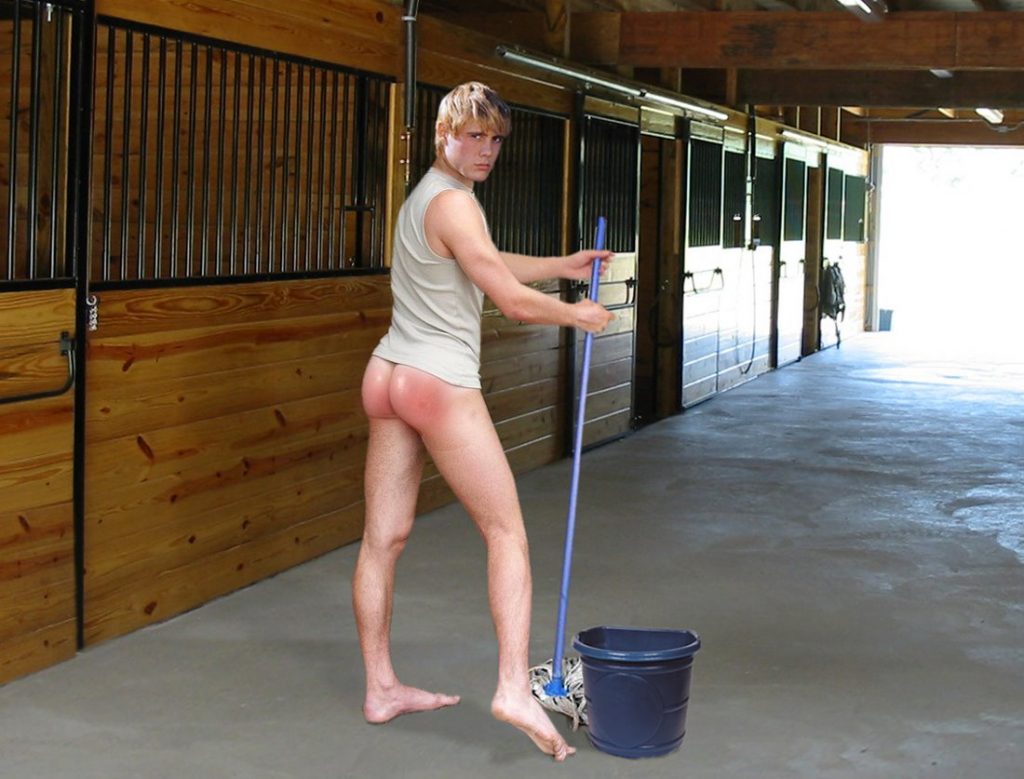 “I don’t care if your buddies will be calling by at any minute, your pants have been confiscated, and they are staying confiscated!! Now carry on with your chores, or they will see you going back over my knee!” 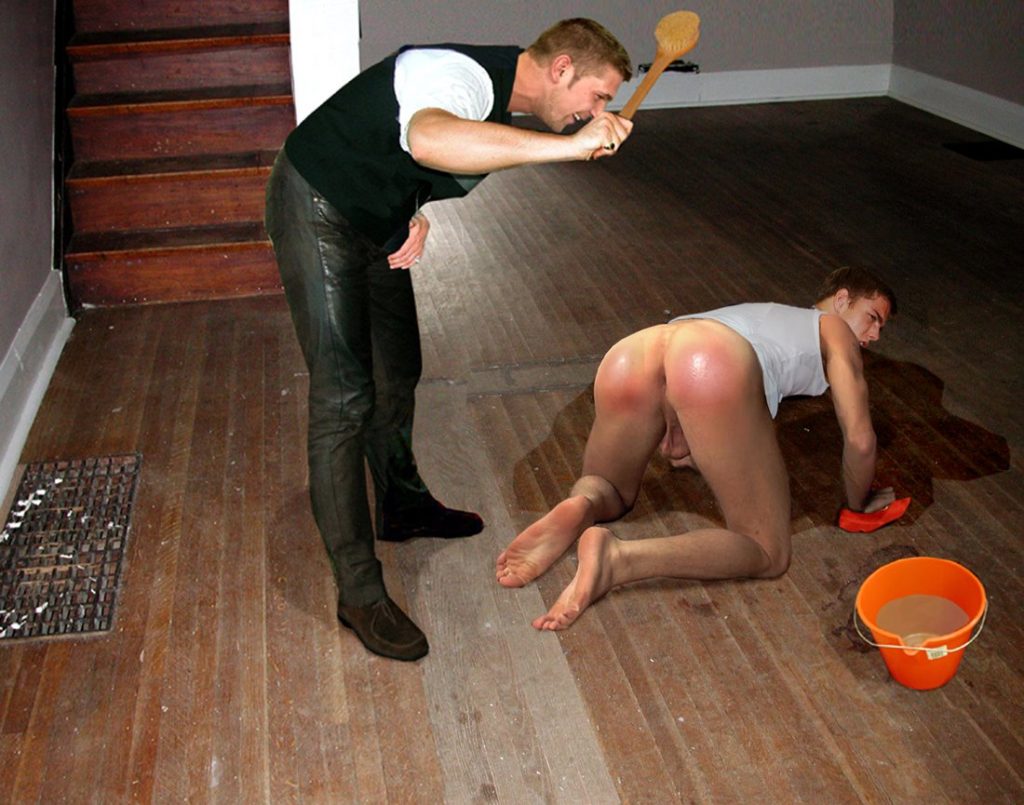 “Keep scrubbing! you will not be getting your pants back until this house has been cleaned to my satisfaction!”