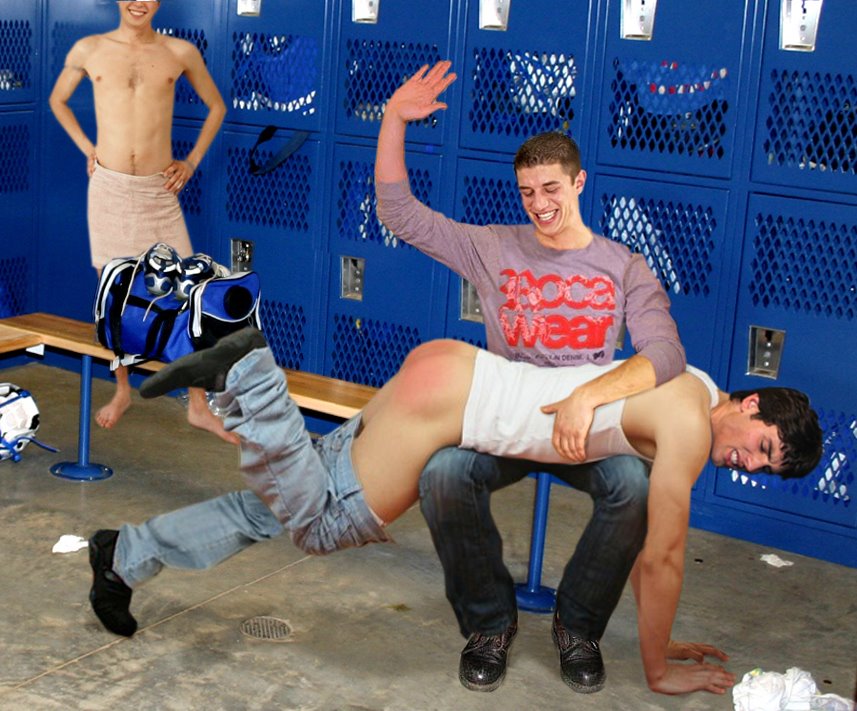 Josh could not believe what was happening to him. When he had woken up that morning, he had been Josh Farrell, the coolest (and hottest) dude on campus, hero of the hockey team, and Meadowville University’s premier babe magnet. Just a few hours before he had been the master of all her surveyed, the scourge of wimps and misfits, a proud, confident sports jock, convinced of his innate superiority and ability to kick the ass of anyone who crossed him, but now, in what seemed like moments all that had changed.

Adam, the guy spanking him, had evidence against him, which could send him to jail for many years, and Josh knew without a shadow of doubt that, the bastard would use it against him if he didn’t get his way. The creep had said that he intended to spank him whenever he felt like it, and Josh was in little doubt he meant that too.

To make matters worse, his nemesis sure knew how to make a spanking hurt, he had obviously been working out, and was no longer the scrawny wimp Josh had once kicked unconscious. With a strong and seemingly practised swing, Adam was delivering an unending series of stinging swats to Josh’s upturned and defenceless nether regions causing a degree of pain which Josh had never before experienced.

Each swat felt like 100 red hot needles being jabbed into his skin or as if his bottom were being remorselessly attacked by dozens of angry hornets.

However, no matter how much Josh’s sensitive backside might sting, it was equalled by the searing pain being inflicted upon the arrogant young hunk’s even more tender ego. Like most bullies Josh feared humiliation more than almost anything, and here he was being humiliated in front of large and growing audience.

Not only was he being spanked like a naughty child, but it was happening in front of an audience, including his new girlfriend Stacy, one of the hottest pieces of tail on Campus and one whom he had been planing to deflower that very day.

In addition to Stacy, a growing number of swim team were entering the room from the showers and standing around watching his shaming. That it was the swim team made it even worse, according to a wide spread rumour, which Josh believed, this years swimming team were almost entirely gay, and those who weren’t actually gay behaved as if they were. Most of them had suffered abuse, and some violence at the hands of Josh and his buddies, and as a result were heartily enjoying watching him receive his embarrassing comeuppance, their gleeful laughter and applause serving to amplify Josh’s mortification.

Add to that the fact that Stacy and at least one member of the swimming team, were filming the scene on their mobile phones and sending the images on to their friends all over town and beyond, meaning that soon hundreds of people would know what had happened to him, and Josh felt that his ordeal could not possibly get worse.

Josh, of course was wrong, his luck had only just begun its hurtling descent into the abyss, in fact, his ordeal could get considerably worse, and indeed was just about to reach a new depth.

Much as Adam enjoyed the feeling of Josh’s muscular behind beneath his hand, his palm was beginning to burn from the relentless slapping, he glanced around for something else he could use on Josh’s backside, and his eyes alighted on his victim’s kicking legs, and, in particular, his expensive rubber soled trainers.

He leaned over and took a firm grip on Josh’s ankle with one hand, whilst pulling off a shoe with another. He tapped the shoe against his palm, and grinned upon feeling the stinging impact of the rubber against his skin.

“Perfect!” he laughed “you will really feel this!” 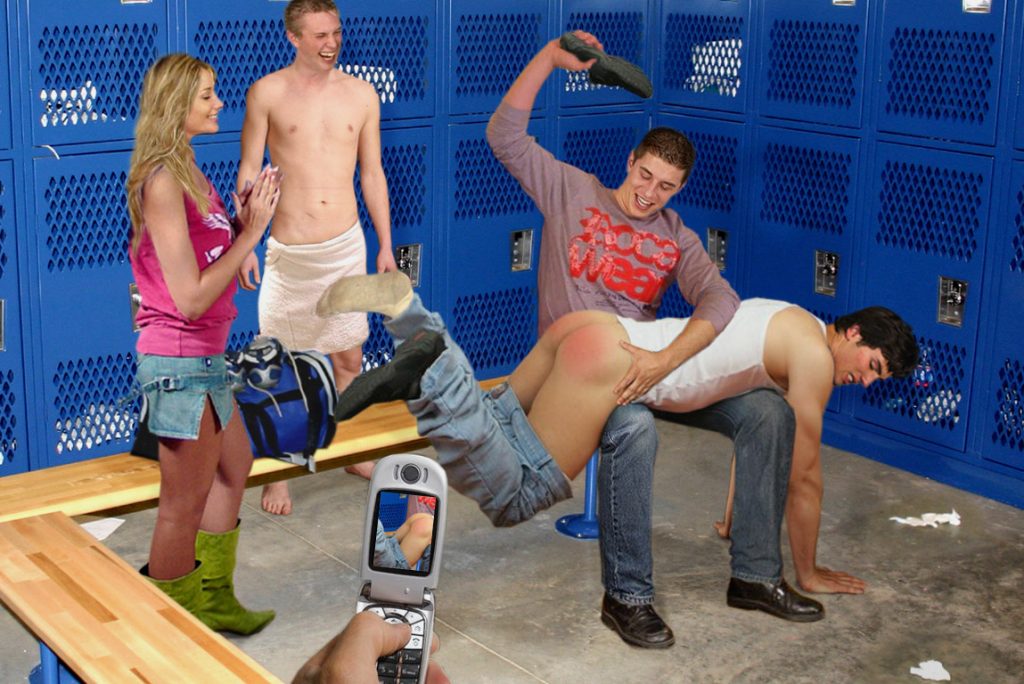 With that he began whacking Josh’s reddening bottom with renewed vigour, greeted with delighted applause by Stacy and the Swimmers, together with desperate gasps of discomfort from the unhappy, and even more sore bottomed Josh.

WHACK!….Whack! ….WHACK! The sound of rubber on boy butt echoed around the locker room as Josh , wriggled and struggle across Adam’s knee, clenching his buttocks, in a vain attempt to lessen the sting each blow inflicted. 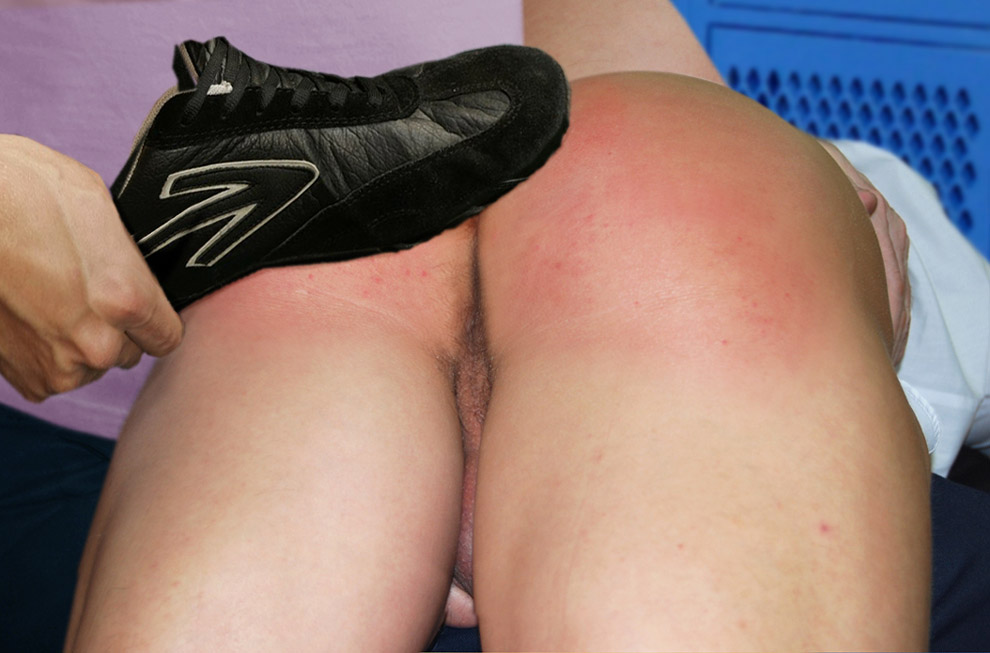 Again and again Adam brought the expensive designer running shoe down on to Josh’s agonised behind. 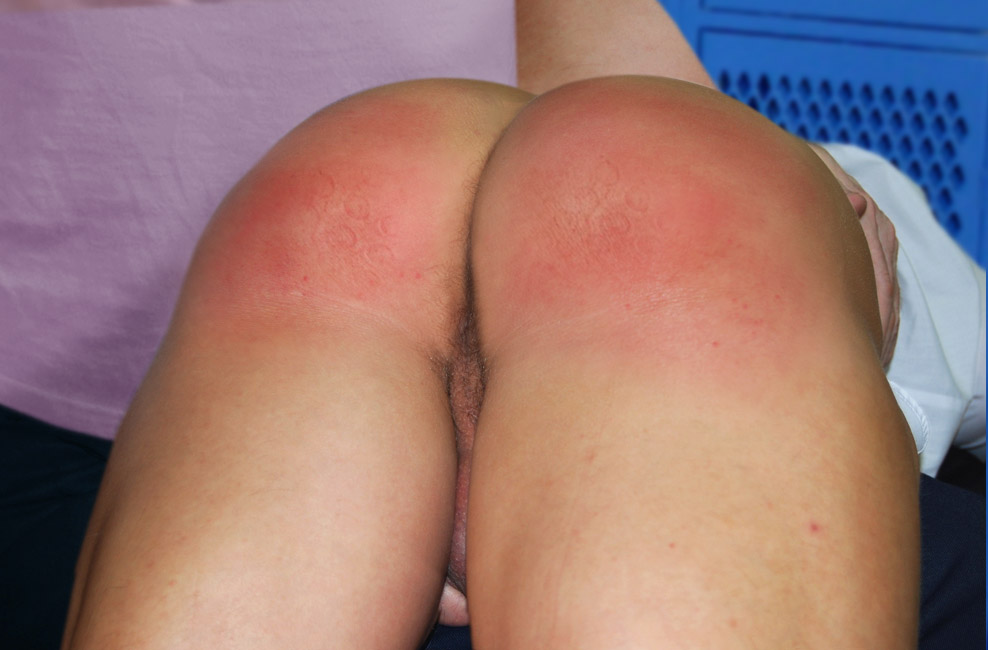 Laughing with delight at the sight of the pattern which the rubber grip left, as if embedded, on Josh’s hot butt flesh!! 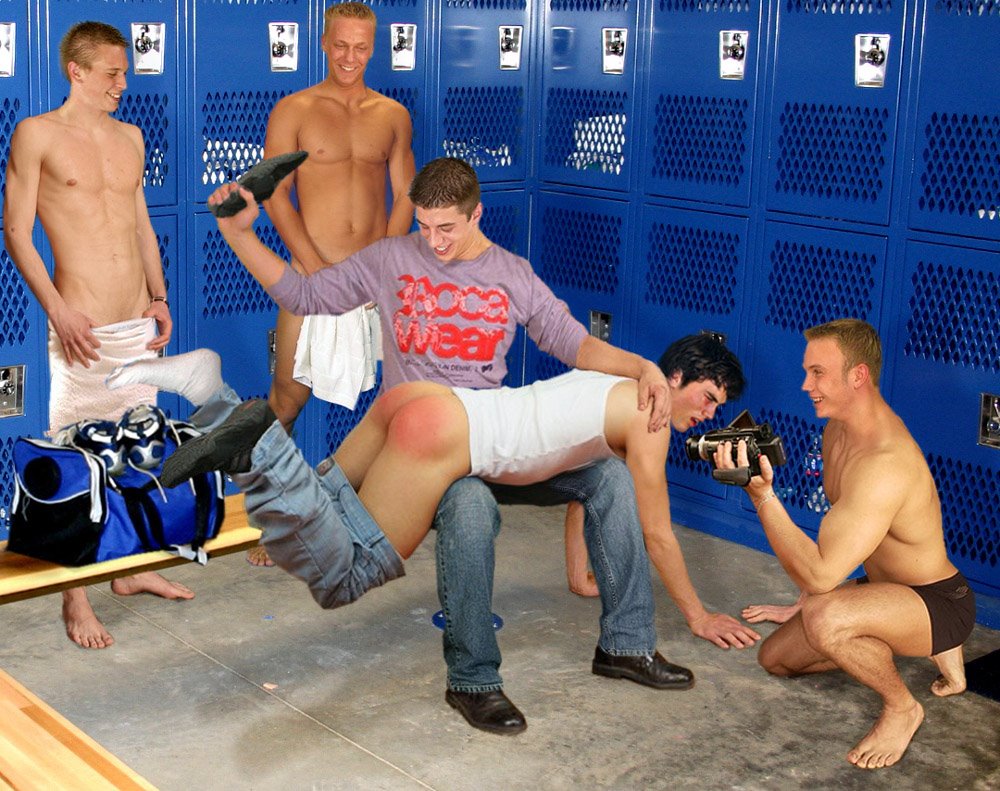 If Josh had thought Adam’s hand had hurt, it was nothing compared to the rubber soled shoe, which caused a searing pain almost beyond endurance. Within moments Josh’s bottom was a burning epicentre of scalding pain, worse than anything he had ever experienced. To his horror he felt the tears welling in his eyes, and the first sob swelling in his throat. Desperate to retain one last vestige of dignity, Josh fought in vain to stop himself from crying until he could no longer control himself, and at last reluctantly surrendered to his tears.

Sadly for Josh, the captain of the swim team had brought his video camera in order to film their swimming practice session and it was soon employed in recording his punishment

“He’s crying!!” yelled on of the swimmers pointing at Josh’s contorted face “What a wimp!”

Soon, in addition to the whacks, the locker room echoed to cheers and shouts of “Cry Baby!” together with Josh’s uncontrolled sobs. 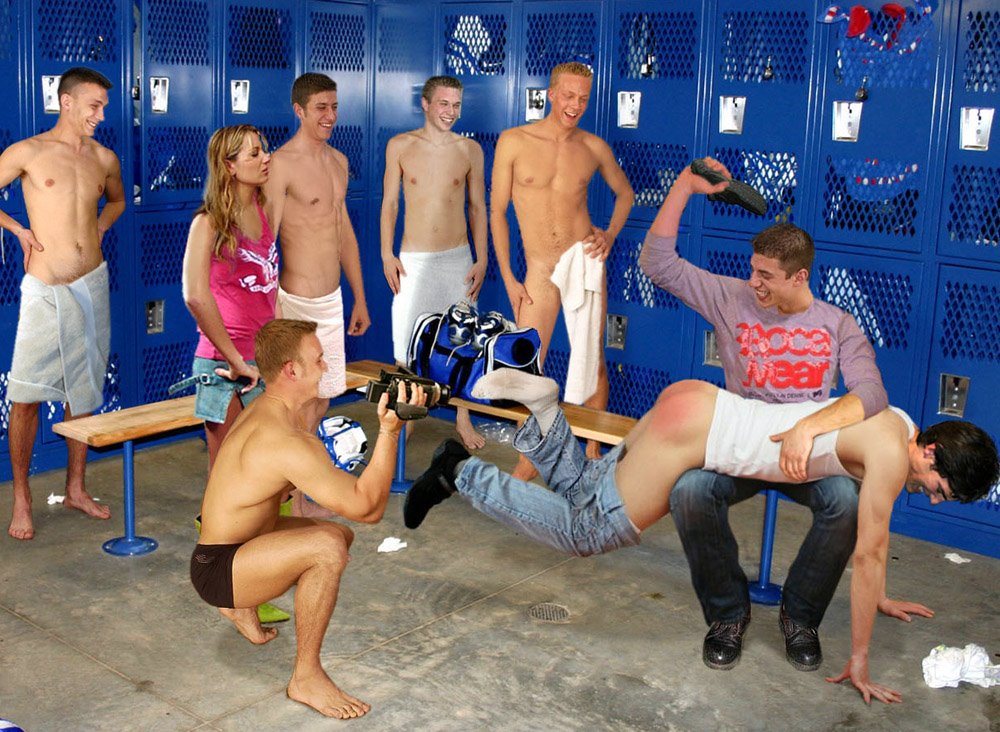 Like most women who express great compassion for a distressed child, but little for an unhappy adult male, Stacy’s reaction to Josh’s tears differed from the swimming boys, in that, instead of delight, she felt only contempt for the jock, to whom only minutes before she would have happily surrendered the final memory of her virtue. “And I thought you were a man Joshie!!” she snarled “I can’t watch any more of this!” with a flick of her blonde locks she spun round and marched out of the room, anxious to tell all her friends what she had just seen, as Josh in his despair, knew she would be.

Adam allowed his gaze to briefly stray from Josh’s bottom to watch Stacy leaving. Her departure was well timed. Up to that point, her presence had been essential in heightening Josh’s humiliation, but it was best she did not observe what he next had planned for the unlucky Josh.